At the far northwest corner of the boundaries which I have (somewhat arbitrarily) designated as encompassing the quadrants of "Waseda Ramen" sits Sanchin. If you asked me to draw a picture of what a stereotypical ramen shop looked like, I'd probably paint you something a lot like Sanchin. Located on an obscure corner far from any train stations, looking a bit rough around the edges, and filled with chubby dudes, comic books, curmudgeonly cooks, and clutter, Sanchin is every bit the ramen shop of your imagination, par excellence. Which is why I was surprised to come home and find that it's a branch of a franchise that stretches from Hokkaido to New Zealand. 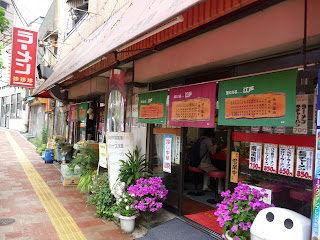 But Sanchin appears to be a franchise chain that allows a good deal of freedom to each shop master, rather than provide a cookie cutter formula. The 'Baba branch of Sanchin ("Three Rare Tastes") features a menu big enough to take up every free button on the ticket vending machine, including some unusual options like raw veggie ramen and nanban ("southern barbarian") ramen with spicy fried chicken laid on top. Usually "rare tastes" (chinmi) refer to bizarre local delicacies like salmon liver, shark cartilage, sea cucumber guts, and other similarly gross stuff, but the three "rare tastes" in question here refer simply to the presence of three regional soups - Hokkaido miso, Tokyo shôyû (soy sauce), and Kyûshû-style tonkotsu (pork bone).

The classic default ("defo" in modern colloquial Japanese) is Tokyo-style shôyû, which the staff at Sanchin calls "Edo dashi" (soup), using the old name of Tokyo from prior to 1868 or so. Sanchin has mad Edo pride, and even displays the names of the 15 generations of the Tokugawa Shogunate (who established Edo as Japan's capital) alongside the menu. Which probably goes a long way towards explaining why the stern-faced old lady cook was giving me a dirty looks - I walked in wearing a t-shirt for the Hanshin Tigers, favorite baseball team of rival city Osaka. Imagine walking into a Red Sox bar with a Yankees jersey on and you sorta get the picture. 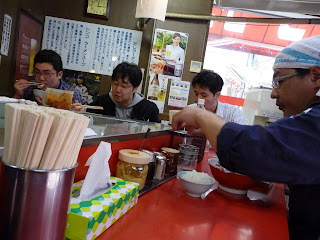 Most of the rest of the clientele seemed to be true blue Edo-ites, with emphasis on the blue, as everyone in the (packed) shop seemed to be firmly rooted in the working class. 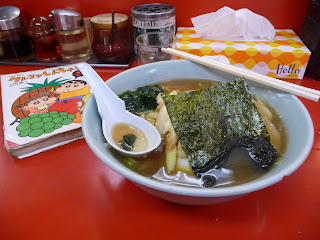 I grabbed an issue of my old favorite comic Crayon Shinchan (kind of like a dirtier Calvin and Hobbes) and ordered the most unusual thing on the menu - celery ramen. Celery ramen? Celery ramen. This is not celery ramen as some kind of nouveau cuisine invention, but more like "heyyyyy, we decided to put some celery on top of some ramen." I chose to go with the "tonkoku" (thick pork soup) base, which wasn't really thick with pork at all, but rather a slightly fattier version of the basic soy sauce, chicken, and seafood stock. 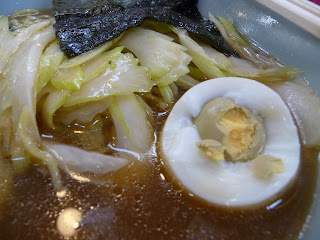 But more than any of the above, I really tasted the celery. There was a heaping mound of the crunchy green stuff piled on top, and the taste had thoroughly perfumed the broth. Add in a nice white American-style hard-boiled egg with a chalky firm yolk, and you've got yourself a bowl of ramen that looks like it got attacked by a suburban Cleveland picnic (sans the jello pie of course). But the celery gave the soup a nice, clean, refreshing ("sappari") taste, which hit the spot on a hot, sweaty, early summer day. 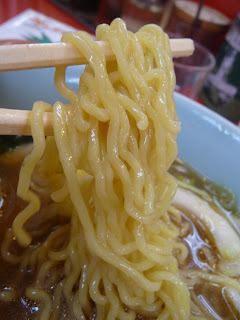 Sanchin's noodles are medium thick, curly, yellow, and chewy, again, every image the stereotypical ramen noodle. Those work for me, but take a pass on the tableside kimchi, which clearly came right out of one of the giant plastic vats that sell for four bucks at the grocery store. When I first undertook this project, I came out of the gates running down all the trendy new school stores on the main streets, but now that those are mostly out of the way, I've worked my way onto the back streets into the scruffy neighborhood joints. What places like Sanchin lack in refinement they make up for in character, and even though the ramen here isn't pure noodlegasm, it's plenty tasty. Celery ramen? Celery ramen.
Posted by Nate at 8:48 AM