Another day, another bowl. Yet another tsukemen (dipping noodle) bowl, to be precise. By Japanese calendrical reckoning we have officially entered early summer, and the temperature (not to mention the humidity!) are rising daily, at least on the days when it isn't pissing down rain. As a result, I find myself gravitating more and more to tsukemen and lighter-flavored (sappari) bowls of ramen, rather than heavy oil bombs that leave pig-scented steam emitting from the pores. 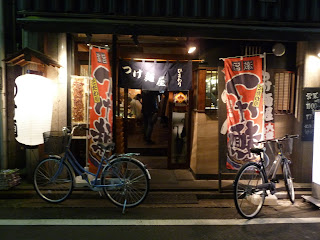 I had some time to kill, so I rode west of Takadanobaba station and turned right on Sakae-dôri, a narrow lane packed with eating and drinking establishments that count Himawari among their number. Himawari means "sunflower," and according to the shop's (barebones) website, the name was chosen because of the poetic connotations of the sunflower; as it turns in the sun, it bends out of its way to meet the thoughts and feelings of those who view it, just as the shop purports to rise to the customers' hopes and expectations. How poetic. 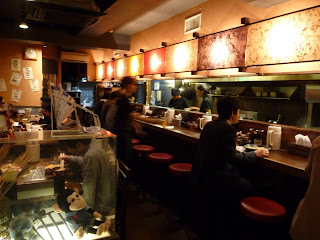 Inside, Himawari is a pretty run of the mill newschool (founded in 2006) tsukemen shop, with a dark, clean interior, and a gender-balanced clientele. Himawari also boasts one of the cutest ramen waitresses I've ever seen, in fact so cute that she cannot be viewed by the naked eye and appears as a blur in this photograph. 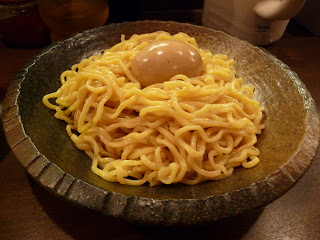 As with most tsukemen joints of this ilk, noodle quantity upgrades are free. I went with the chûmori (medium large), but when I glanced around the room, I wish I had gone a further size up. The biggest orders come with the noodles laid out flat on a plate the size of a pizza pie. 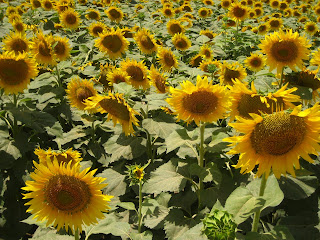 Given the circumferences and the yellow color of the noodles, the serving almost looks like a...sunflower? 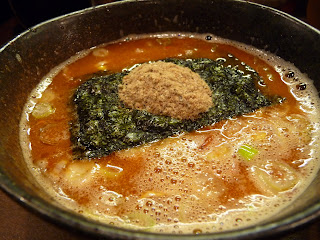 Generally speaking, Himawari is working from the Taishôken tsukemen tradition, which is by far the most popular style at the moment. As at Yasubee and Benten, the broth is based in a light and mild broth made of chicken, pork, konbu seaweed, and katsuo dashi (dried skipjack tuna). Though not as sweet or vinegary as Taishôken's dipping soup, Himawari's broth is a bit thicker, especially when you stir in the small amount of powdered fish stock laid atop the raft of nori seaweed. Nonetheless, Himawari's tsukemen never tastes overly fish, nor overly spicy, even if you order the "spicy" menu option. Like many popular tsukemen joints, Himawari hinges on a product that shoots for mild taste and broad appeal, but delivers on pure quality of ingredients and preparation. 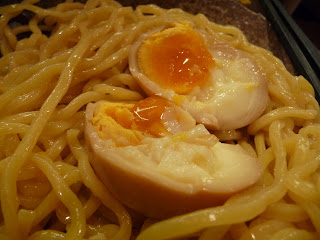 Tons and tons of noodles don't hurt either; you can serve me anything fat, chewy, and salty and I'll be satisfied, as long as you give me enough of it. The extra egg I ordered was a bit more well-done than I like (that is to say, it was more solid than liquid in the center), but still good. The addition of white onions as an optional tableside topping reinforces the similarity between Himawari and Yasubee. There's a fish and pork blended soup ramen on offer as well, but I didn't see a single person order it, as is generally the case at shops of this type. 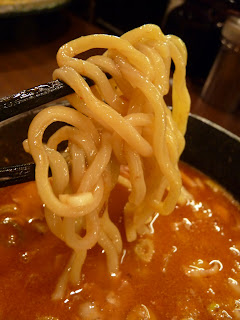 Overall, Himawari delivers a tasty, well-executed, and satisfying bowl of tsukemen. Nothing in particular makes Himawari stand out, as the end product is so similar to so many other shops both in 'Baba and around Tokyo, but nonetheless I'd rank it in the upper tier of my tsukemen bowls thus far; perhaps just above Yasubee and just below Taishôken. A good option to keep in mind as the weather keeps getting warmer.
Posted by Nate at 8:47 AM

Did you at least get her number??

dogg, she was way out of my league.