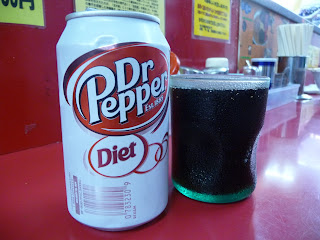 Although Dr. Pepper has become slightly more prevalent in vending machines here in the J over the course of the last few years, it still remains a rare find in Tokyo, with Diet Dr. Pepper existing (heretofore) only in the minds and memories of American men and ladies. Japanese people eat plenty of things that most Americans could never stomach, not least of which was the broiled squid intestines I was served last night. But the tastes that make people here squirm the most are those old childhood favorites - Dr. Pepper and Root Beer. They're both admittedly somewhat bizarre, unplaceable, almost medicinal tastes that most Americans are too familiar with to recognize as classic examples of the "acquired taste." Short story long, you want to get started off on the right foot with some white doods, putting Diet Dr. Pepper on your menu goes a long way. 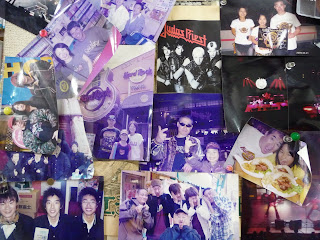 Chiyosaku is all about putting smiles on the faces of everyone who pokes their head under the eaves; the boss checked to make sure we could read the vending machine, offered free boiled eggs to everyone in the house, patted shoulders, made conversation, and spun a soundtrack of 90s New York hip hop and R&B. Based on the number of photos of smiling guys and gals tacked to every available surface of the shop, I'd say Chiyosaku has won a place in the hearts and minds of many of the young people in the neighborhood. Apparently there's even a MIXI community (the Japanese equivalent of Facebook), where Chiyosaku fans organize chat and organize meetups, presumably for the purpose of eating Chiyosaku ramen and discussing how much they love eating Chiyosaku ramen. 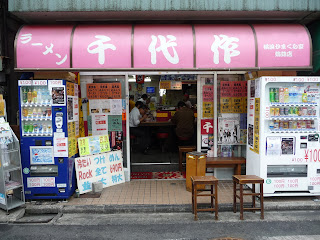 Chiyosaku is located all the way at the back left end of the bustling Sakae-dôri alley just northwest of Takadanobaba station, and based on the location, I'd guess that the clientele tends to run towards more of the local junior college and art school students rather than Waseda types. Plus of course the occasional awkward foreigner duo. 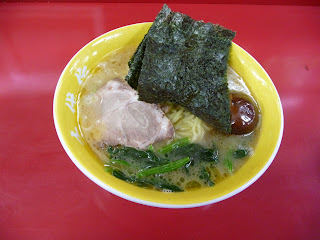 The sign out front says "Tokyo tonkotsu" (pork marrow soup), but that can mean a lot of things, ranging from rich blended seafood broth to reimaginations of heavy Kyushu-style pure pork. But what Chiyosaku serves up is Tokyo tonkotsu in location only, since the Ie-kei (house-style) ramen they dish out is, strictly speaking, from Yokohama. To get a full rundown on Ie-kei, check out my earlier post on Shichifuku-ya, but the basic characteristics of Ie-kei ramen include a mandatory three sheets of nori seaweed, cooked spinach topping, and thick straight noodles served in an oily tonkotsu-shôyû (pork bone and soy sauce) and chicken stock broth, with tableside fresh garlic and Korean-style spicy bean paste present-to-hand. 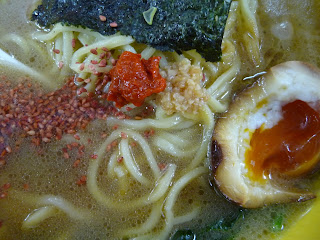 Unlike most Ie-kei shops, Chiyosaku omits the character 家 (meaning "house" and variously read "ie" "ya" "ke" and "ka") from its name, hiding the obviousness of their lineage to the original Yokohama Yoshimura-ya. But it's all made clear inside, with a description of the master's tutelage under one of Yoshimura's pupils, as well as in the use of noodles from the famous Sakai Seimen factory, which is one of the classic noodle providers for Ie-kei shops. In addition to the standard toppings, there are also some mysterious pink sesame seeds. 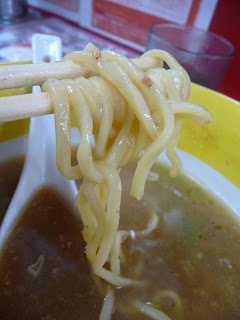 The soup, while not as thick and rich as at Jirô, is still plenty hearty, and the kind you want when you're hooongry, which we were. In terms of neighborhood Ie-kei purveyors, Chiyosaku is on par with Shichifuku-ya (though the soup is perhaps thinner), and way better than Yamaoka-ya. Dabs of garlic and spicy paste add a bit of kick, but the broth is dense enough in taste to keep from being overpowered, provided you don't go too bonkers. Hard-boiled eggs are free, but I opted for a soft-boiled, which was nearly black from soy on the outside and shining like a gooey orange jewel on the inside. But it's the noodles that make it all work - we took our time eating, but no matter how slowly we slurped, the noodles never got soggy or stringy, staying firm and chewy. 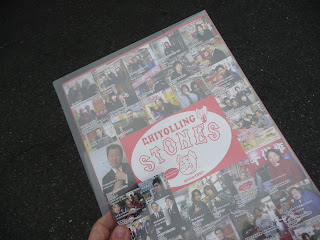 I'm not sure if my love for Chiyosaku is such that I'm going to join the official fan club, but it was definitely a damn tasty bowl of ramen. There's also abura soba (soupless noodles) on offer, a real rarity for an Ie-kei shop. The homey, friendly neighborhood vibe inside couldn't be beat, and when we walked out, we got fliers and stickers slapped with Chiyosaku-themed rock band logo parodies. Shout it out to RC/DC - Ramen Chiyosaku takaDanobaba san-Chome!
Posted by Nate at 8:45 AM