I was feeling lazy and just wanted to grab a quick bowl right by the station for a late lunch between study bouts. Takagiya is literally right across the street from the Waseda subway station, and some spicy tsukemen sounded good to me. I didn't have my camera on me, so cellphone pics this time... 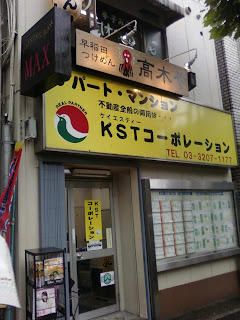 Right between the McDonalds and the Subway (and the subway), Takagiya is perched on a second floor corner just above a real estate agent. Keep your eyes peeled for the cartoon of the red octopus with stars for eyes yelling "whoooooo spicy!" ('hiiiiii karai!'). I had visited the Takadanobaba branch of Takagiya a couple of months back, but if I'm gonna cover every shop in the vicinity, that means every location of every shop as well... 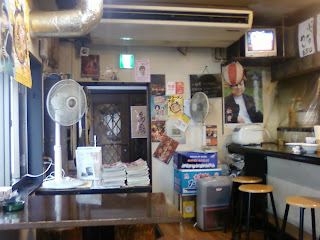 As soon as I walked in to this Takagiya, I realized that this, and not the 'Baba branch, must be the 'honten' (original location). It just had that vibe to it, small, wooden, worn in, with no frills besides a fat shelf of manga to read while waiting to eat. Most of the customers seem like regulars, and the only person behind the counter is an older woman in a flower print mumu who calls out orders in a low-pitch sing song voice as she delivers them. 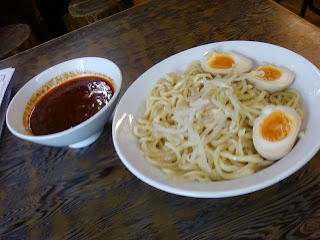 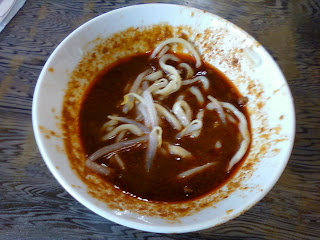 You need the protein in that egg to help temper your palette though, since Takagiya's tsukemen is legitimately spicy. Not atomic, but definitely up there; the water cups are nice and big, and they come in plenty handy, as do the tableside tissue packets. No chashû (roast pork) slices come with the noodles, but there are bits of meeting floating at the bottom of the broth. I always appreciate tsukemen that functions outside the mold of the standard sweet vinegar fish-shôyû taste that has taken over the mainstream at the moment. 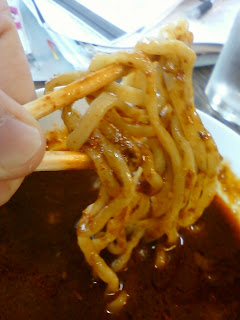 The broth is on the thick side, and a bit gritty (in a good way), and is definitely of the flavorful chili ("umakara," they call it) variety, rather than a bland and flat pure heat. There's some kind of almost sweet and smoky taste to the broth, which I wanted to say might be a hint of tomato, but it could just be a certain trick to roasting the peppers. The noodles aren't quite as thick as standard Taishôken or Yasubee style tsukemen noodles, but are nice and chewy and almost comically curly, with the kinks in each noodle fixed in place. I wasn't that into Takagiya when I visited the Baba shop, but these really hit the spot. I guess you gotta go straight to the source!
Posted by Nate at 10:07 AM