My buddy D texted me the other day: "Ramen before the show - are you down?" I texted him back anyways, even though I'm pretty sure it was a rhetorical question. The rain had cleared for a single day so we had plans to bike across town before hitting up a crazy art opening / music / video performance / zine library / party / thing. We stopped for sustenance in Shinjuku, cruising up and down the cluster of 10 or so ramen shops on Otakibashi-dôri just northwest of the station, trying to pick a winner. Our first choice had run out of soup, so we wavered a bit, but in the end decided to stop into a new shop offering the somewhat novel option of curry ramen. 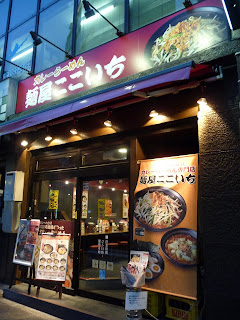 D is not the biggest fan of J-curry, but I had just eaten at the Jirô down the block and Nakamoto was out since megaspicy is probably not a good choice for a man who has an international flight the next day, as D did. So, curry it was. Inside, the place was clean, sterile, totally devoid of customers, and somehow familiar. When we sat down and picked up the menu, I caught sight of the familiar yellow logo - we were eating in the ramen outlet of the biggest nationwide (and now international) curry chain Cocoichi. I've been known to eat at Cocoichi from time to time, but we both felt a wave of skepticism as we realized we had unwittingly stepped into a big corporate chain shop. 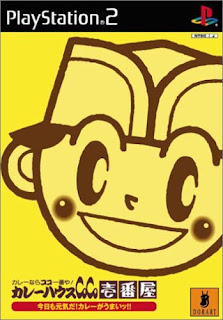 There's even a Cocoichi video game! The chain started back in 1978 in Nagoya and since has gone on to open over 1200 restaurants all over Asia. Menya Cocoichi is a newer addition to the franchise family, and as yet the branch in Shinjuku is one of less than a dozen, and the only one outside of the Nagoya area. If nothing else, I figured, it would be interesting to see what happens when a big non-ramen chain ventures into the ramen world, which I can't really think of a precedent for. And as far as I'm concerned, Japanese curry may look like poop, but it tastes delicious.

Most regions of the country have their own local specialty ramen styles (gotôchi) - Sapporo has Sapporo ramen, Asahikawa has Asahikawa ramen, Ôita has Ôita ramen, and Nagoya has...Taiwan ramen. Yup, you heard right - Taiwan ramen is from nowhere else but Nagoya, Japan. Back in 1970, the cook at the Chinese restaurant Misen decided to reinvent the dish of danzimian noodles from his hometown of Tainan, Taiwan and retooled it for Japanese palettes. 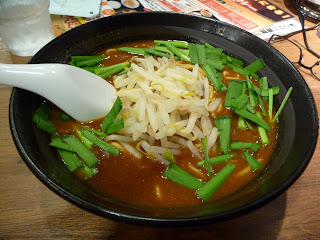 So what exactly is "Taiwan ramen"? It's usually shôyû (soy sauce) soup (but here curry of course), topped with tons of nira (Chinese chives), bean sprouts, ground pork, and made plenty spicy with extra chili. Taiwan ramen was a barely known Nagoya-area specialty until the mid 1980s, when the nationwide "spicy food boom" catapulted it into the public eye. Even so, it's a bit of a rarity outside of central Japan, and you see it more often on Chinese restaurant menus than at ramen specialty shops. 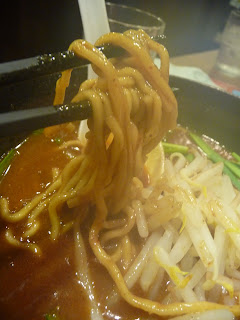 Like at all Cocoichi shops, you can calibrate your own spice factor - I went with "gekikara" (intensely spicy), the highest level possible, which is still only moderately spicy compared to shops like Nakamoto, or, god have mercy, Yagura-tei. Nonetheless it was tasty, sweet and a bit tangy - definitely a souped up version of the standard Cocoichi recipe, which works for me. Being curry, the broth is much thicker than most ramen soups, so it really sticks to the noodles. The noodles were cut much, much shorter than average - maybe it's to prevent slurping splash back? Not bad, but nothing special, though D dug the dimunitive dimensions. 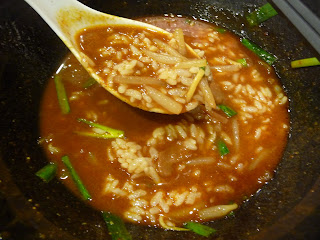 But it wouldn't be a visit to Cocoichi without some curry rice, so we both ordered small servings of rice and dumped 'em in our bowls for a kind of curry porridge. 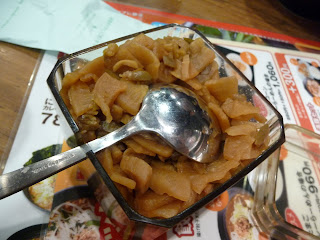 There are even fukujinzuke, sweet vinegared pickled veggies that come along with curry rice, set tableside. Despite our misgivings, we both ended up enjoying Menya Cocoichi a fair amount. Definitely a bit more clean and processed than most shops, but not a bad outing for a franchise chain that specializes in something else entirely.
Posted by Nate at 7:35 PM

This is NOT Taiwan Ramen. This is just spicy curry ramen.

For the only Taiwan Ramen place I've been able to find in Tokyo, you need to visit Ko-shun in Ochiai.

yeah - i realize that this isn't true taiwan ramen, just a chain store's attempt at marketing as such by dumping a lot of cut nira leeks on top. i actually pass by Ko-shun almost everyday on my bike, so it's been on my hitlist of shops to try. thanks for the tip!