This past weekend, my friend S told me about a new kind of ramen - gohôbi ramen. Now, gohôbi ramen isn't any one kind of ramen per se, but a special kind of ontological role for ramen - ramen as reward. Gohôbi is something like a special prize or added incentive, a reward for oneself upon the completion of a task. The task in question was climbing Takao-san, a low-lying mountain in Tokyo's western suburbs. 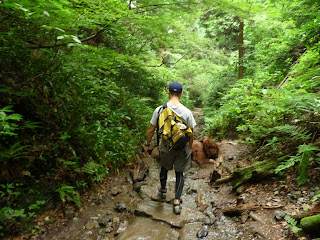 Less than an hour from the hustle and bustle of Shinjuku station, Takao-san is a 599 meter tall peak that is a popular weekend getaway from metropolites such as myself, S, and the 2.5 million other people that climb the mountain every year. But the best part about climbing Takao-san is that there are 8 separate tracks up, and by taking the most strenuous ridge route (relatively speaking of course; this IS only a 599 meter peak), we left the crowds quickly behind. After taking in a leisurely loop while enveloped in green growth, we figured we had earned ourselves a bowl of gohôbi ramen. 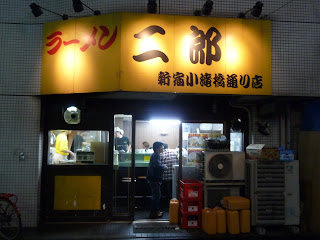 After a quick dip rubbing shoulders with tattooed yakuza in a public bath in the town of Hachiôji, S and I headed back to Tokyo to chow down and undo all of the day's hard work. We spent about an hour flipping through my newest ramen guide book and drooling, but in the end decided to go with a tried and true favorite - the one, the only, Ramen Jirô. I had to be back in Shinjuku to help my buddy interview heavy psych rock god Narita Munehiro, so we decided to hit up the Otakibashi branch of the celebrated chain, just a few hundred meters north from the station's west gate.

The second we walked in, "Danger Zone," the theme from Top Gun began playing on the stereo, and if you know anything about Ramen Jirô, you know how ironically appropriate a musical choice that is. Jirô serves the biggest, baddest, most brutally greasy, and downright ruggedest bowl of ramen in Tokyo. Loaded with lard and garlic, Jirô has been said to transcend the categorization of ramen itself to become, according to its die hard fans (known as "Jirolians"), a "totally independent food that can only be described as 'Jirô.'" A veritable cottage industry of Jirô-related knowledge has appeared on both the English and Japanese interwebs - for a full rundown by the most Jirôed man of the blogosphere, check out Ramen Tokyo's clearning house for all things Jirolian, including a link to the NPR story. 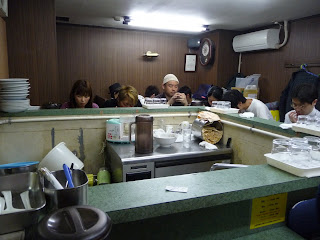 Last time, and every time I've eaten Jirô (usually at the Takadanobaba branch), I've had to nearly roll myself home, satiated to the point of bursting, moaning in pain and pleasure and swearing I wouldn't eat Jirô again for months. Between the volume and the oil, it's a delicious experience, but one that should not perhaps be repeated with too great a frequency, at least for this ramen writer. But the Shinjuku Otakibashi branch of Jirô is a kinder, gentler Jirô. Where was the lard slopped onto the floor? The tense mass of sweaty men hunched over their bowls? The famously frightening shop staff? The Otakibashi branch even boasts (gasp) a table! And, what's this? A Jirô tsukemen (dipping noodle option)? I can't even begin to imagine what that might look like, but it's clear that in the wake of last year's Jirô boom, when the shop moved from cult favorite status into the broad public eye, the shop is making an effort to find new (and perhaps female) customers. 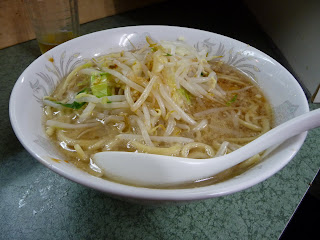 The famous turn of phrase at Jirô is "Ninniku iremasu ka?" ("You want garlic?"), which has since been appropriated by dozens of imitator shops across the city. But those three little words, which must be properly parried by immediately rattling off a list of desired toppings (garlic, chili, veggies, and extra lard), were nowhere to be heard. Instead, the cook asked "Topping wa yoroshii deshou ka?" - imagine walking into a tough old fashioned New York deli and being asked "Would you happen to care for any mustard with your pastrami today, sir?" The pure visual impact of the bowl is perhaps less intense than at other Jirô branches as well - granted I ordered only a half serving of vegetables, but the Otakibashi bowl looks...well, more like an actual bowl of ramen than a terror-inducing mountain of wheat, vegetables, and liquid pig. 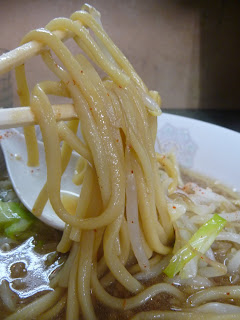 The noodles are different from most Jirô branches as well; rather than being unevenly cut, the noodles here are, while duly extra-thick and chewy, not as rough and raw as at other Jirô branches. Now, all this might sound like a big complaint, but if you've experienced Jirô before, the Otakibashi branch seems to be missing something of the ineffable Jirô-ness of the experience. But all it took was one single sip of that sumptuous soup to remember my Jirô-love. My sweet lord is it good. I think Jirô uses a very special kind of soy sauce in their tonkotsu shôyû (soy and pork bone) soup, and it is just exponentially richer and more delicious than anyone else's. Through some magical process of salt and marrow, Jirô has developed a broth that is almost sweet as sweet as sweet sweet lovin'. Toss a few shakes of chili on there and you good to go, holmes. 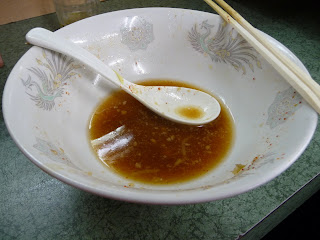 Nothing but nothing tastes as good as a bowl of Jirô after a long day of hiking and riding trains. I ate Jirô after climbing Fuji three years ago, and after this I may have to make reward bowls of Jirô a post-hiking tradition. I had never even come close to finishing all the soup at Jirô before, but when I looked down, I had nearly reached the bottom. Maybe my recent bowl of uber-fatty Tsubame-Sanjô ramen had recalibrated my tolerance? Despite my earlier whining, it was kind of nice to walk out of Jirô with my head held high and the top button on my pants still fastened. In the last year or two, dozens of imitation Jirô-clone shops have sprung up around Tokyo, but there's nothing like the original. Now to make pilgrimage to the original Mita Honten Jirô shop...
Posted by Nate at 10:41 AM

You need some disclaimers on this post, cause that is one unique Jiro experience. I can imagine a group of petite California girls, reading your blog before a week of shopping in Tokyo. Not understanding the severity of their decision, they stop in at Jiro. After a 30 minute wait and some strange stares by the locals, they get their bowls. 2 minutes later and they are in the first cab back to Narita.

goooooood point. i think you've already said it as well it can be said, but yeah:

just because this is mild for jiro doesn't mean it's mild. if you get down with any jirô, be sure you know where to find a bathroom and a bed within the next few hours...

This is very non-ramen related, but I am very interested in your friend's interview with Munehiro Narita. Is there any way to see that?

Anyway, cool blog! Have fun on your quest.

there is indeed a way to see that interview, sir (or madam)!

it just went up at: