Not long after I got back from the big Niigata trip, I met up with Brian from Ramen Adventures for one of our semi-regular ramen lunches. Since the last few bowls had been in 'Baba, this time Brian chose the venue, electing to knock off another challenger from his list of Japan's "Top 30" ramen shops. The shop in question was Inoshô, reknowned for dishing up some of the spiciest, fishiest soup in the city. Located near the Shakujii-Kôen station well out in the burbs on the Seibu Ikebukuro line, Inoshô wins the award for one of the furthest distances I've traveled within the city for the express purpose of eating ramen. 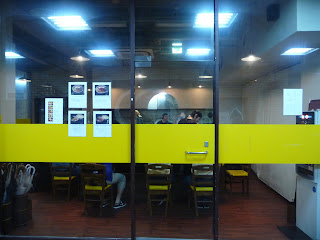 Fortunately, I was running way late and had Brian to show me the way, or else it may have all been for naught; Inoshô is not an easy shop to find. From the station, go out the south exit, turn right, then follow the tracks. On your left a few blocks down, there's a half-empty brick shopping center; go into the basement, wind your way past through the tunnels, and find yourself face to face with your noodle destiny. 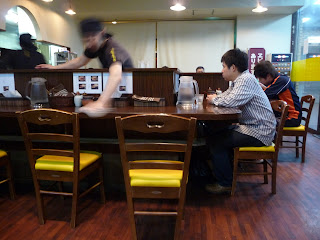 Even at 2.30 PM on a weekday, we had to wait a good fifteen or so minutes for a bowl - despite the obscure location, the word is out about Inoshô, and I wouldn't be surprised if we weren't the only ones to have traveled a furr piece to slurp their soup that day. In addition to being ranked #16 in the nation according to whatever faceless ramen ranking authority Brian heard about the place from, Inoshô also tends to however in the top 40 on the Supleks Ramen Database, thee clearing house for basic ramen knowledge in Japan; it ranks a truly impressive #4 in the tsukemen (dipping noodle) division in a nation currently obsessed with tsukemen.

Of course, it's also been covered on various food-centric television programs (are there any other kinds in Japan?); check this video for a brief overview of the shop, or peep the clip posted on Brian's site if you want to indulge in the distinct pleasure of watching Japanese people trying to eat spicy food while being videotaped. 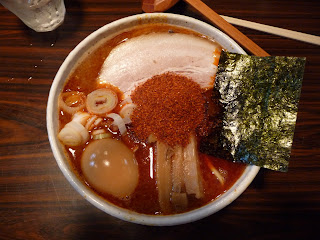 Inoshô offers four basic options - standard ramen, spicy ramen, standard tsukemen, and spicy tsukemen. To be more accurate, the ramen isn't just spicy, but kara kara, "spicy spicy." The base broth is primarily chicken and pork, with a bit of seafood blended in, then laced with Inoshô's home made râyû (chili oil). So that's the first spicy. The second spicy is a massive mounded of powdered chili peppers piled in a pyramid atop the bowl... 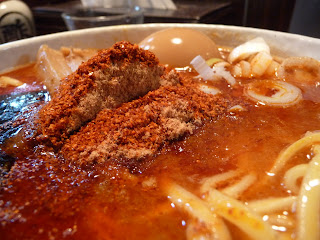 ...or at least that's what it seems to be. Break into the mound and you discover something far more complex - the chili doesn't make up the whole pile, just the top layer, laying atop a generous helping of pulverized dried fish, primarily mackerel (saba). Now, I've come to like fishy ramen far more than when I first started, but it can still be hit or miss for me. But something about Inoshô's dashi (fish powder) did the trick for me - katsuo (skipjack) can be a bit pungent and overpowering, but there's something about the heavy, oily, oceany sour sweetness of mackerel that I love, and mixing the powder into the soup transformed it from a tasty, spicy bowl of ramen to something truly above and beyond. The boiled egg and menma (bamboo) are also done up proper. 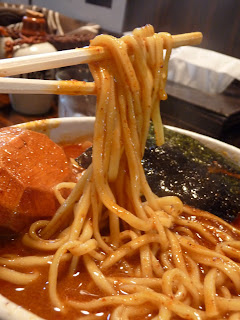 But Inoshô's ramen is, between the chili and the fish, a very, very rich bowl, so if you're gonna trek out here, make sure you're hungry. The massive pile of powder translates into a thick, almost chunky bowl of soup, with lots of flavor sticking to each bite of the thick, chewy, and excellently made noodles. Inoshô also serves up generous portions - I ordered a large (ômori) bowl and got one noodle-packed receptacle. Take into account the fact that soup so spicy gets slurped slowly and you'll find yourself in front of the bowl for more than few minutes. That said, Inoshô's ramen is spicy, though not overpoweringly so, especially compared to shops like Nakamoto or Yagura-tei. One of the spicier bowls in Tokyo, sure, but it falls into that middle category of "spicy for Japan." Don't get me wrong, I went through half a pack of tissues wiping sweat from my brow. But I didn't feel my guts lighting up like a firefly this time. Though I suppose you can always toss in a few more spoonfuls of chili powder thoughtfully (?) provided counterside. Regardless, this stuff is heavy, maaaan. 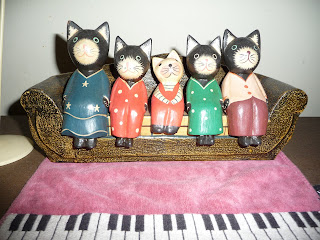 So, thumbs up to Inoshô for a well-thought out, carefully prepared bowl of noodles made with high quality ingredients. Another cool thing about Inoshô is their rotating evening-only menu, where each day of the week they offer a different bowl of unconventional ramen, from soupless noodles with lotus root to soba topped with black chicken. If only it weren't so far out in the faceless burbs I might find myself hanging out with these cool cats that oversee the shop...
Posted by Nate at 8:06 AM