There's no small amount of popular and journalistic writing about Japanese eating customs that describe the phenomenon of "sadistic cuisine." You've probably read something along these lines at some point in your life: vivid, stomach-turning descriptions of still-living marine creatures flopping around on the plate. Or maybe a friend has described eating a freshly-severed octopus tentacle, still writhing and attaching its suckers to the roof of the mouth. Labeling these practices any more "sadistic" than the preparation of your average factory-farmed piece of beef tells us more about "America" than it does about "Japan," but I bring it up because I want to talk about another side of Japanese eating - masochistic cuisine. 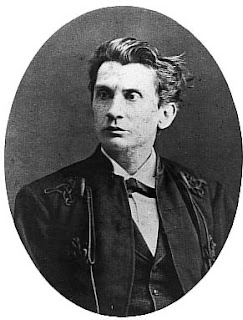 You may not recognize the visage of Leopold von Sacher-Masoch, from whom masochism draws its name, but I'm guessing that you've probably been forced to eat something you revolted, quite likely while being told "try it, you'll like it!" But have you ever derived special physical pleasure from being made to suffer through the act of eating? Queue up the Velvet Underground's "Venus in Furs," named for Sacher-Masoch's best known novel, and I'll tell you how it feels to be flagellated with a wet noodle.

Months ago, a buddy of mine told me he saw a Japanese TV show in which celebrities were served a bowl of ramen so spicy that most of them could barely keep from spitting their food out. Naturally, this sounded like something I wanted to eat. A bit of googling turned up a shop called Yagura-tei (The Tower House), located on a small side street in the western suburb of Hatsudai, just a stone's throw from Shinjuku. In addition to a full phalanx of standard ramen bowls, Yagura-tei advertises something they call "Uchû-ichi karai miso ramen hotaru" - roughly translated, "Firefly Miso Ramen, the Spiciest in the Universe." From time to time, I've eaten bowls of moderately spicy ramen (including the tantanmen at Chinmaya posted below), but every time I thought about Yagura-tei I started drooling. The other day my bicycle route for the evening took me right through Hatsudai, and I decided the time had come for the Gusto to be Gone For. 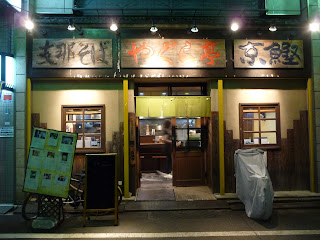 I screeched up to Yagura-tei on my bike and slid open the door to find myself the only person inside. I knew exactly what I wanted, but I had to take a few minutes to decide just how much I wanted to punish myself - Yagura-tei's spicy ramen goes from a scale of 1 to 10, so I had to weigh my adventurousness and confidence against the value of my taste buds and the question of how bad of a stomach ache I was ready to get the next morning. I figured I'd shoot down the middle and ordered my ramen at level 5; the waitress (who seemed to double as the mom in this family run neighborhood joint), tried to talk me down lower. "I've been to Sichuan. Twice!" I protested. She furrowed her brow. "I ate my way through South India!" I insisted, thinking that would convince her for sure. "It's a totally different kind of spiciness, the spiciest in the world," she reassured me. So I decided to go with level 4. 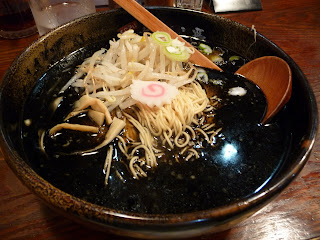 Now it's natural to associate spicy food with the color red. After all, that's the color of the chili peppers most commonly eaten in much of the world. But there is nary any red to be seen in Yagura-tei's "Hotaru" (Firefly) ramen. Rather, the whole bowl is a dark black color, flecked with specks and swirls of white, orange, and beige. After all, this is the "spiciest bowl of ramen in the universe," so the bowl should have a galactic appearance to it, right? The black color comes from butter soaked in vodka and fired over high flames, as well as from edible charcoal ground into the soup. 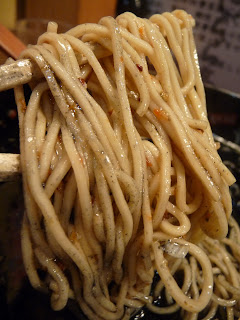 So, where does the heat come from? See those little orange specks? That's pure habanero pepper, and lots of it. Clocking in at roughly 200,000 Scoville Units (the official chii heat scale), or about 25 times hotter than a Jalapeno, the habanero is indeed one of the world's hottest chilis (though barely holding a candle to the recently discovered Naga Jolokia). For every star you raise on the Yagura-tei spiceometer, the cook dumps in an extra 5 grams of pure habanero puree; thus my level 4 Hotaru ramen clocked in at a full 20 grams of raw habanero. Um, ouch. 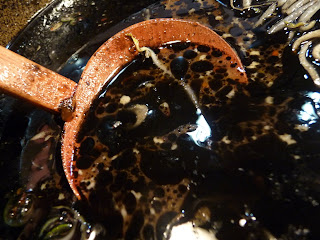 "Ouch" is the primary taste sensation that I experienced while eating this ramen. That and the feeling of coughing involuntarily and incessantly. I took a first sip and felt the biting sting of the capsaicin. The upswing of using habaneros in the broth is their unique, sweet, smoky, and honestly quite delicious taste - hot as they are, habaneros actually have a real taste, rather than deliver "pure" heat with no flavor. But you better believe that I didn't taste a whole lot of the miso underneath. As I continued eating, I began to understand the other reason why Yagura-tei uses the "universe" distinction - looking into that swirling black soup, sweating profusely, overcome with an intense wave of tongue stimulation, I began to feel at one with the cosmos. 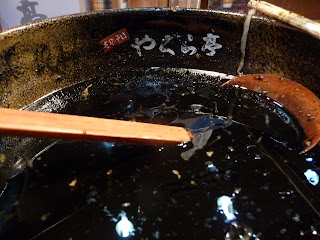 I knew from the first bite that this bowl would be a battle, but that I could do it. And do it I did, but it was not easy. Just to add insult to injury, Yagura-tei's portion of noodles is extra large, which means it's going to take plenty of time to choke down the bowl. I'm not really sure why they chose thin, Hakata-style noodles - I would have preferred thicker noodles, since thin noodles tend to be lower in water content and thus get soggy much faster, which these definitely did. I'm guessing the rationale is that thin noodles pick up more of the habanero bits, the bastards! The bowl was topped off with menma (bamboo), plenty of bean sprouts, and a naruto fish cake, but I'd be lying if I told you I could taste them at all. This was indeed a whole different level of spiciness than even the famous Môko Tanmen Nakamoto. And don't expect any encouragement from the cook, who looks stoically on as you challenge the spiciest bowl of ramen in Tokyo. 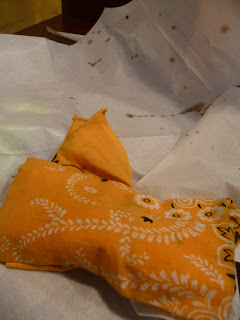 I started out legitimately enjoying the experience, and even the taste, but by the end I was spent, slowly stuffing small strands of noodles into my mouth so as not to shame myself with defeat. The only casualties were my handkerchief, drenched in sweat, and the paper apron I was thoughtfully provided with at the beginning of the meal. 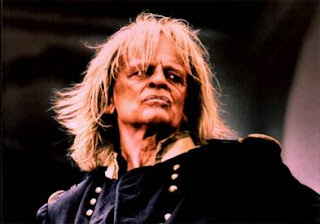 Thank goodness for the apron though, since it protected my Klaus Kinski t-shirt from spicy soup splatters. I had worn the shirt on purpose, hoping to draw some strength from his batshit crazyness in my quest. 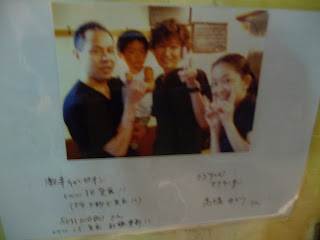 After nearly a half-hour, I vanquished the noodles, but abstained from slurping down the soup. When paying the bill (which turned out to be no small amount thanks to a surcharge per habanero), I inquired as to the records of previous challengers. A certain TV personality had wolfed down a bowl of the 10-star (that is to say, 50 gram) ramen in just over 5 minutes, even drinking the soup down to the dregs. I'm not even sure Klaus Kinski could do that! As I stumbled out into the rain, I felt a deep, strange buzzing sensation begin in my gut, which I half expected to light up like a dynamo running on pure capsaicin. So that's why they call it "Firefly Ramen!"

Afterword - The next morning was not so much fun.
Posted by Nate at 5:42 AM

You gotta do it Homer Simpson style, and coat your mouth with candle wax before eating the peppers. Only then can you eat the Guatemalan Insanity Pepper.

...and then trip balls and meet my spirit animal on the steps of a purple pyramid.

Dude, those broth photos like... actually scared me this time.

It looks like a moat around Mordor. Or the inside of a galactic planet eater.

I am sorry to hear that your guts got geri punished. It was... worth it?

Alice was asking how hot it was... compared to Korean or Indian spices, etc? She claims she could throw down a level 5 bowl... Bravado?