This installment of Beyond Baba is way, way, way beyond Baba. The Japanese labels for the Beyond Baba posts say "Baba bangaichi", which literally means "unnumbered place", "unregistered place", or "outside the numbering system." Perhaps the most famous use of the term bangaichi is in the classic prison break film, Abashiri Bangaichi, in which 60s movie star par excellence Takakura Ken escapes from the snowy "Alcatraz of Japan."

The reason why this particular turn of phrase is appropriate for this particular bowl of ramen is precisely the penitentiary connection - this bowl was eaten on the island of Sado-ga-shima, which served as the penetentiary of Japan during the 17th-19th centuries. During the period of the Tokugawa Shogunate's rule, criminals, the homeless, and anyone else unlucky enough to piss off the Shogun got exiled to Sado, and if they were really unlucky, sent to work in the island's mines. Some of the more famous Sado exiles include the Noh dramaturgist Zeami, the monk Nichiren, and the emperor Juntoku. 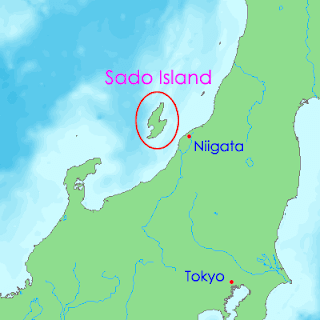 Naturally, this sounded like a great place to take a vacation. I had been wanting to go to Sado for years, and last week finally got around to it. Comparatively close to Tokyo but still somehow remote, this funny-looking island in the middle of the Sea of Japan in frigid Niigata prefecture was calling out to me. I went on a shopping spree at the outdoor store, bought a new tent, sleeping bag, and all the other necessary gear and hit the road, taking the night bus then a 2.5 hour ferry ride, arriving in Sado at the decidedly un-ominous hour of 8.30 AM. 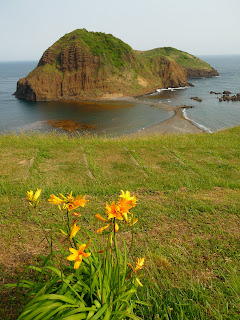 Sado may no longer be where they send exiles, but it is a world apart from the urban Tokyo conurbation. The Japan Sea seems to appear around every bend in the road, and for some of the locals living their whole lives on this rural isle, I wouldn't be surprised if it still feels a bit like a prison. Bussing and biking around the coast, I passed some of the smallest and poorest fishing villages I've ever seen; the whole place, while scenic (as the above photo attests), feels dilapidated and forgotten, which is the case in a lot of rural regional Japan.

After a few days of camping and sightseeing, I ended up in the town of Ogi in southern Sado. Ogi is (sorta) known to the world as the home base of the reknowned taiko drumming unit Kodô, and once a year, thousands of tourists descend on the island to see the group's annual Earth Celebration. Other than that, however, the place is pretty dead, to say the least. 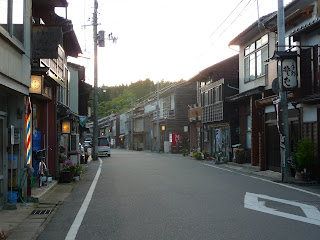 As with most towns in Sado, finding a square meal in Ogi was a distinctively difficult challenge. Each town only has a few restaurants, and the odds that at least a few of those are shuttered on any given day are high. I wandered through the deserted streets lined with low wooden houses built in the traditional style, feeling like a character in a Tsuge Yoshiharu story. At last I found a dockworker who pointed me in a foodwardly direction; I stepped into a local pub for some grubbin' and got one of the frostier receptions I've received in a while - the crew of just off work longshoremen was not happy to have my sunburned ass in their midst. The food was delicious, some fish and tofu, but the scene was awkward enough that I hightailed it after a couple appetizers. 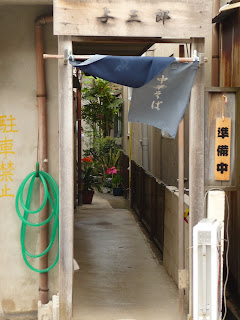 But fate was smiling on me, because there's is one thing always sure to put a smile on my face - namely, a cloth curtain with the words "Chûka Soba" ("Chinese noodles"- ramen!) written on it. As luck would have it, just such a cloth was hanging right across the street...Yosaburo, it read, and it definitely looked open. So I peeked under the curtain to find...an alley leading to someone's back yard? I double checked the sign and ducked through. I was basically in someone's garden, but the light was on, so I slid open the door. I got just about the absolute opposite reaction as I had at the last place, as a woman in her 50s greeted me with a big smile and beckoned me to sit down on the tatami mats in what was surely the refurbished living room of her house. 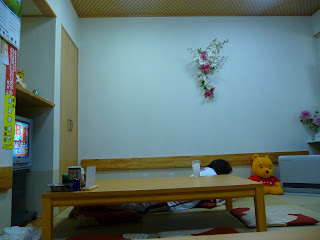 Warm and bright, the TV was on, and a kid in a track suit lay splayed out on the floor reading comics. When you have a big house in the countryside, why bother renting a separate store front? There was a small menu on the table listing all the basic ramen permutations of shio (salt), shôyû (soy sauce), miso soups and toppings, so I decided to go with a simple shio with butter. 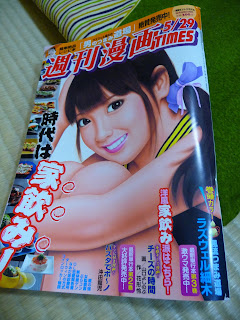 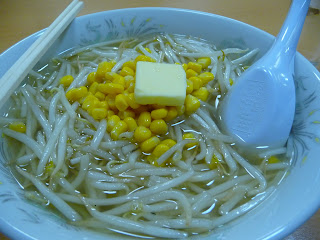 Before long the bowl was up, and it came with an extra helping of corn and bean sprouts to make up for the lack of pork. I'm not gonna lie. It tasted hella good. The soup base had an almost "western" kind of meaty taste, very buttery even before the butter melted it, and a lot closer to something you might find at a chuck wagon than something you might find at one of the "refined" shio ramen shops popping up over Tokyo. It was piping hot and rejuvenating, which is just what I wanted after a couple grungy nights of camping on the beach. 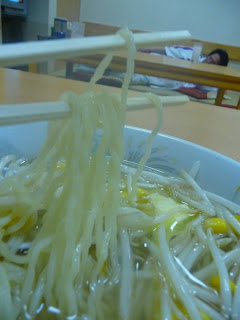 And the noodles were good too! I'm sure she just imports them, but man, they had plenty of sproing for being so skinny. It wouldn't have taken a lot to impress me at that point, but this was a great bowl of ramen. But what really puts Yosaburô above and beyond is what happened next. I asked the cook if the local onsen (hot spring) was still open, to which she not only replied in the affirmative, but offered to drive me there - hell yes I wanted a ride to the public bath! The only thing better than a good bowl of ramen is a hot bath and a sauna right after. So, if by some strange set of circumstances you ever find yourself looking for a meal in the town of Ogi, on the island of Sado, in the prefecture of Niigata, in the land of Japan, hit up Yosaburô. What other ramen place will drive you to the onsen??
Posted by Nate at 8:36 PM

Yeah, I've had my share of cold receptions in the Japanese countryside. But the warm ones are always above and beyond, and totally eclipse the frigid.

I really enjoyed this post, dude. Glad to hear you survived the beach and winds of the Western japanese coast.