One unseasonably warm day earlier this week, Brian from Ramen Adventures swung by Takadanobaba so we could grab a bowl for lunch. We walked west on Waseda-dôri, surveying our options among the still numerous shops as yet not ticked off from my list. Although I'd had some decent ramen of late, it had been far too long since I had a truly bomb ass bowl, so I wanted to make this one count. After strolling to the end of the strip, we decided to go with Yatai Ramen Takaryû. 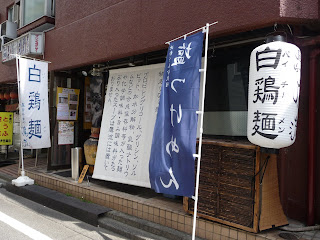 I had been hearing good buzz about this tucked away little shop on a backstreet just west of Narukisu. Takaryû's main menu item is something called paichîmen, a Japanizated pronunication of the Chinese bai ji mian - White Chicken Noodles. A thin, shio (salt) broth soup sounded like just the ticket on a hot afternoon, which is not the kind of day to load yourself down with thick porky broth that will be emitting from your pores for the rest of the afternoon. 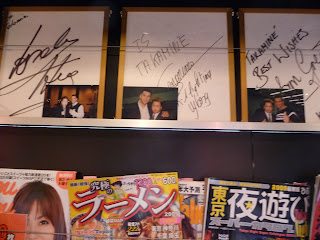 Takaryû is cozy inside, but relaxed, with just one guy working behind the counter and a bit of a homey feel. The majority of the walls are decked with motorcycle-related paraphenalia (apparently the owner is a big Harley rider), and tons of ramen-related reading. Definitely tapped into the scene, Takaryû has been reviewed in all the major magazines and guides and were sharing the love with fliers placed out for the shop staff's own favorite ramen shops around town. There was also information about an upcoming "Ramen Show" in suburban Tokyo featuring appearances by far-flung regional styles as well as "mashups" between some of Tokyo's most popular shops. Sounds intriguing...

The shop soundtrack was a live video of Utada Hikaru singing her hits on a plasma flatscreen TV. It occurred to me that it had been almost exactly ten years since I first came to Japan, which was the summer in which her first album took the country by storm. I struggled to remember the first bowl of ramen I ate in Japan back then - I think it might have been in a mall food court in Wakayama? 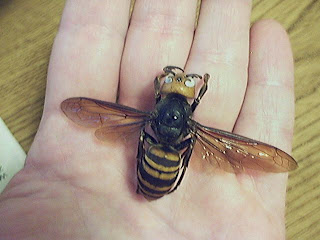 One thing you might not expect to find in your average ramen shop however, is bees. Well, giant hornets to be exact. The suzumebachi is a cajungulously large Japanese hornet whose venom is apparently powerful enough to kill. (That is, very thankfully, not a photo I took). Brian told me that apparently in some townships you get a bounty from the government if you bring in an empty suzumebachi nest. Naturally, the best thing to do after killing these guys is to soak them in booze, since anything THAT bad for you must make a hell of an aphrodesiac, right? There was some viper wine and other assorted critters soaked in alcohol against one wall, but it wasn't possible to squeeze in a pic past the slurping salarymen. 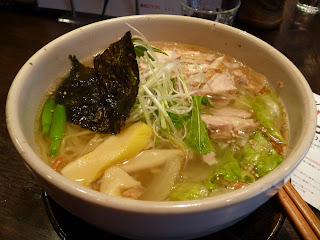 The crazy alcohol is probably part of the Taiwanese connection at Takaryû. According to their website, Takaryû's signature paichîmen was inspired by the food the head cook ate at night market street stalls while growing up in Taiwan. Interestingly, the source wasn't a noodle dish, but rather chicken fried rice which homeboy then recreated in a light ramen form. The soup is essentially made from a light, thin, but complex chicken stock, with no pork products or artificial chemicals used whatsoever. The result is delicious and refreshing. 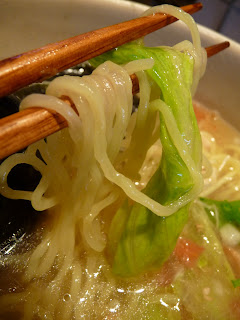 Not surprisingly, such a bowl is marketed heavily towards women who don't usually "do" ramen. One special menu item is the "salad topping" of raw chopped tomato and lettuce, which was apparently suggested by some regulars of the feminine gender. 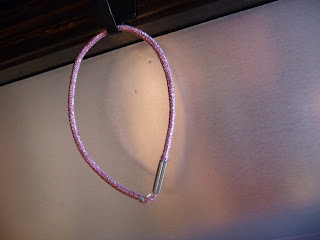 The other tip off that Takaryû is trawling for lady noodlers is the hair ties provided at each seat. 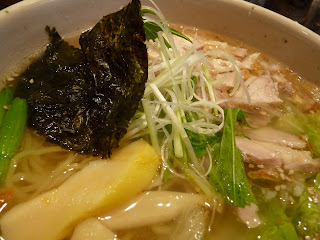 There's a lot of care all around when it comes to toppings. In addition to a veritable mountain of chopped light meat chicken (which I kicked Brian's way), Takaryû serves up the freshest, youngest, lightest, and just maybe tastiest chunks of menma (bamboo) that I have ever laid upon my tongue. And then there were some mysteriously unidentifiable veggies that Keizo over at Go Ramen figured out was "liliaceae." After looking at Keizo's photo of Takaryû's jewel-like jellied yolk egg, I regret not ordering one of those too. That's right, Takaryû is the ramen joint that the bloggers are buzzing about! 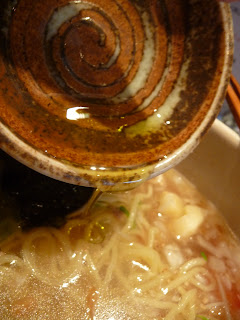 As an added bonus, Takaryû provides different "additives" that you can request halfway through the bowl - transform the taste with your choice of tabasco, olive oil, fresh pepper, Thai-style nam plaa (fermented fish sauce), or Okinawan citrus (Shikwasa?) salt. We both went with the olive oil, which was a good choice, giving a rich new layer to the mild soup. 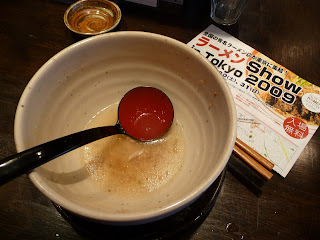 I slurped down every last drop of the succulent savory soup. Great broth, thoughtful toppings, high quality noodles that matched the soup well - not much to complain about. The only caveat - as Takaryû mentions on their website, "it may not fill up those used to heavy pork ramen." Personally, I was fine, though if you're really hungry I might head somewhere else. I didn't see an option for a large portion (ômori) on the menu, though the ticket machine did have a cryptic button marked "boku ikemen", which roughly translates as "I'm a hottie." Is this code for extra noodles, or is it like buying a "smile" at McDonald's? The best bowl I've had in far too long.
Posted by Nate at 10:02 AM

I had no idea this place was popular. I guess I got lucky when I randomly chose it.

Hey I've met Utada Hikaru before. I went to her prom (unfortunately not with her...haha).

I don't think it's that popular, but i think it's kind of one of those "hidden treasures." How did you find it?

And what's the Utada story??