What to eat, what to eat? My stomach was (again) a little on the dicey side after a few too many "Lime Sour" cocktails the night before, and I wanted something simple and filling. I had been thinking tsukemen (dipping noodles), but then I remembered Tokyo Menchintei Honpo. Menchintei serves one thing and one thing only - abura soba, soupless "oily noodles." Menchintei (Honpo just means "original shop") has been around for 10 years, dishing out what they call a "secret Tokyo meibutsu" - a hidden local specialty. 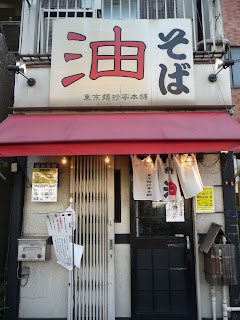 Menchintei is just barely hanging on to what might be considered the Waseda Ramen zone. Located on the southwest corner of the Tsurumaki-cho intersection northeast of campus, Menchintei is actually technically located in Bunkyo-ku, the next ward over, and is a lot closer to the Edogawabashi subway station. 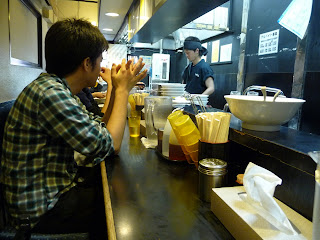 But there are plenty of Waseda students who make the schlep - at 3.30 PM on a Wednesday, I barely snagged the last seat amidst a full row of hungry male students...and one lone lady with her nose buried as deep in her book as possible. It sounds like there can be quite a line sometimes, but I guess I got lucky. Menchintei is definitely popular - ranking a staggering 8th in Shinjuku-ku on the Supleks Database, just behind shops like Watanabe and the famous Kururi, and ahead of Ore no Sora. Menchintei even sells prepackaged noodles and oil online, shipping their slurp out nationwide for 20 bucks a pack. 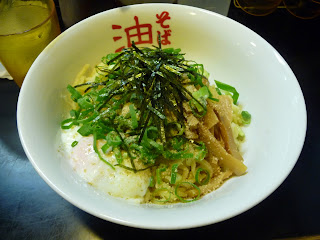 Everyone knows what you're going to order - abura soba, literally big pile of noodles sitting in a little bit of oily flavor essence. Despite the word "oil" in the name, Menchintei wants to be sure you know that abura soba is actually BETTER for you than a standard bowl of ramen; signs are posted that it only has one-third the calories and a lot less cholestorol. I guess it makes sense if you think about it - oil as there may be, there's no soup, which is where all the melted animal parts and according fats and such reside. In any case, Menchintei will serve you as big a bowl of noodles as you're prepared to eat - up to "onimori" (devil mountain) sized, a full 4 times the size of the standard bowl. There's a sign out front politely requesting that first timers do not challenge themselves to demolish the whole bowl, so I just went with the regular large portion. 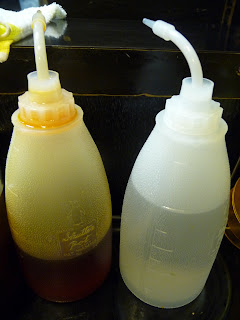 Since there's only a bit of flavor essence oil at the bottom of the bowl, drizzling the thing with plenty of vinegar and râyû (chili oil) is essential to bringing out the true taste of the bowl. Naturally, there is a sign to remind you of this as well. 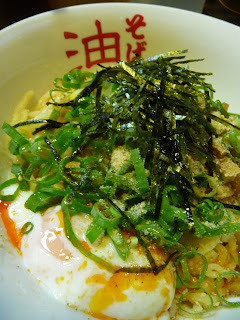 Unlike the new generation of abura soba, mazesoba, and other soupless noodle bowls that have stormed Tokyo in the last couple of years, Menchintei's bowl is simple and stripped down. Rather than operate in the Bubka or Junk Garage mode, piling on a phalanx of crunchy and chewy toppings ("Japanese nachos" I call it), Menchintei's abura soba is topped with just a few slivers of nori and a few pieces of tasty menma (bamboo). Since I was skipping on the pork châshû I added an onsen tamago (barely boiled egg) and got some extra green onions and sesame seeds. 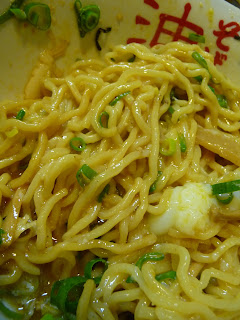 And then I started to mix. Yet another sign conveniently reminds you to stir hard and stir fast, flipping all the noodles through the little pool of oil and getting the oil and vinegar to provide a nice coating. There's also a little bit of garlic available tableside. Slurp, slurp...and it's good! Not that I was worried, but man, was this a satisfying bowl. Comfort food, pure and simple, nothing overpowering, savory and stripped down, and not the least bit bland. As much as I like a complex bowl with lots of toppings where every bite is different, there's something to be said for just shoveling a whole deep bowl of oil noodles into your mouth one after the next. Overall, a very similar taste and vibe to Niko Niko down the street, but I think I may give the slight edge to Menchintei Honpo. If you're ever in the mood for old school soupless noodles, it would be hard to do much better.
Posted by Nate at 7:58 PM