I've been downing plenty of bowls recently, but most of them have been outside the greater Takadanobaba / Waseda zone, so in the last couple of days I've been trying to make an effort to get serious about mapping out the rest of my own hood. I'm thinking that there's somewhere between 40 and 45 shops to go, but I'm definitely well past the halfway point. Going for the tortoise and the hare strategy here. 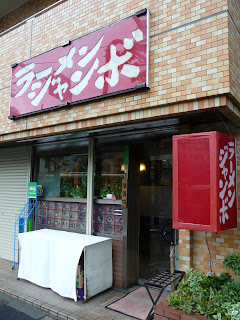 So speaking of hares, let's hop to it! This time up is Ramen Jumbo, just up the hill from campus on Waseda-dôri. To be honest, I wasn't real stoked about crossing Jumbo off the hit list - it seemed to have its shutter half-down half of the time, and the dusty old photos of the menu outside didn't look all that appetizing... 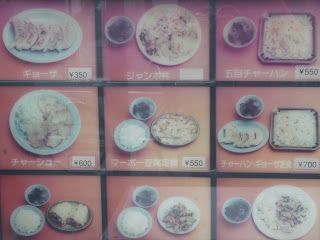 But I stepped inside and I liked the vibe instantly. A nice little neighborhood shokudô (cafeteria)-like joint, with a little TV perched in the corner and the menu written on scraps of colored paper pasted up on the walls. 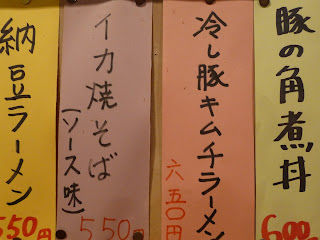 God help me, but I got a soft spot for restaurants who write their menu on rectangles of construction paper. In addition to the whole gamut of ramen offerings, Jumbo has also got yakisoba (fried noodles) and classic teishoku (set meals) like Japanese-style mapo tofu (a sweeter version of Chinese mabo doufu), reba nira (stir fried liver with leeks), kakuni (stewed pork), and the like. And you know they're doing it for the kids when the most expensive item on the menu tops out at about 600 yen. Like a lot of these places, Jumbo is run by an older couple, who have mostly likely been helming the kitchen for years if not decades. When I walked in, there was just one older man inside, probably a prof at Waseda or just a local ojisan (gramps) on his way to or from the bank, slowly sipping away at his soup. Definitely a calm neighborhood oasis removed from the hustle and bustle.

I'm guessing that the clientele at a place like Jumbo is almost solely Waseda-related. While it didn't seem to have quite the same vibe of "hallowed institution" like places such as Inaho, Hozumi, or Merci, which are right by the main gate, there was a generous plastering of posters for club activities, upcoming theater productions (Waseda has been thee place for independent theater for over 100 years), sports games, choral performances, and so on. While I was waiting for my order to come up, a student from Waseda high school came in, buttoned to the brim in the classic Prussian schoolboy uniform that has been de rigeur at elite institutes of higher education since the 1870s or so. 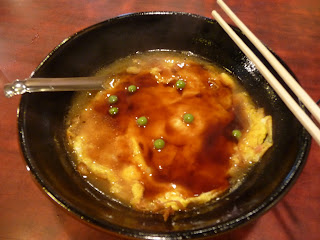 So, what kind of ramen can you get at Jumbo? To quote Steve Perry of Journey: "Any way you want it, that's the way you need it, any way you want it." Which is to say, for a couple hundred extra yen, Jumbo will take essentially any item on the menu and throw it on top of your ramen - sure there are regular toppings like corn and wakame seaweed, but you can get mapo tofu ramen, kimchi ramen, nattô (fermented soybean) ramen, grilled veggie ramen, liver and onion ramen, or what I got - Tenshin ramen. 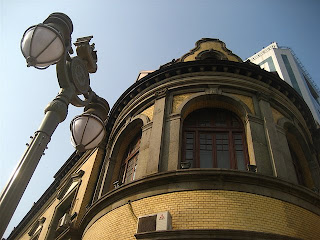 "Tenshin" is the Japanese pronunciation of Tianjin, the Chinese port city about an hour outside of Beijing. Tianjin was a colonial concession town where all the imperial powers of the 19th century tried to stick their foots (and other body parts...) in the door, and there's still a lot of the original brick architecture in the center of town, with an Astor Hotel, old banks with soaring columns, and all the other trappings of rich guys in monocles trying to turn a profit in Asia. 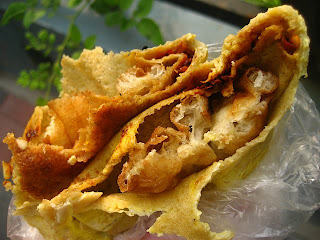 In Japan, a "Tianjin-style" dish (usually rice), means served topped with a thick egg omelette stuffed with imitation crab and green peas then doused in a sweet and gooey brown sauce. For the longest time I couldn't figure out what on earth the dish had to do with Tianjin, but I think I'll finally hazard an amateur guess. One of Tianjin's most famous local specialties are jianbing, thin griddled egg crepes topped with onion and cilantro and smeared with sweet and spicy sauce. Maybe that found its way to Japan? A specious speculation, but it could be, right? 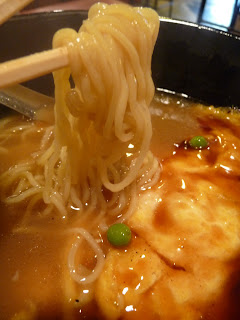 So when my bowl came up, it was a thin shio (salt) flavored chicken stock soup with a big ol' crab and pea omlette dropped right on top, smothered in sweet and tangy sauce. Maybe not the stuff of culinary wet dreams, but this falls into the comfort food par excellence category. The soup isn't so strong, so it gets pretty sweet pretty fast, but whatever. The noodles themselves are pretty thin and lacking in girth and bounce, and by no means of very good quality, but they sure taste good when you've got a big soft hunk of them clutched together with a piece of pea-studded egg. This is not a bowl to approach the same way you would approach one of the fancy places vying for a feature in Ramen Bank magazine - Jumbo is even less likely to be reviewed by a ramen critic than a place like Ramen 30 around the corner

So yeah, Ramen Jumbo serves up a bowl that is at once of very low quality and very high quality. It's kind of cheap tasting and gross, but I'm the kind of guy who will be defending Taco Bell until the day I die. And Jumbo puts in a lot more love than your average TB outlet. Plus, for just a few yen more you can add a mini fried rice or a coke to your bowl - not bad for 6 bucks. If you go to Jumbo expecting a "ramen experience" you'll probably be disappointed. But if you go in for the cheap and tasty old school meal that Waseda kids and grads chow down on every weekday, then you'll have a nice lunch.
Posted by Nate at 6:03 AM

ooo... i am a tofu super fan! sigh. i want the mapo tofu soooooo badly right now. with rice.