Ever been to Morioka? Ever even heard of it? Come on guys, city of 300,000, capital of Iwate prefecture? Founded in 1597 by the 26th lord of the Nanbu clan? No? Well if that's the case, then I am sorry to inform you that when it comes to one of the secret noodle capitals of Japan, you, sir, are an ignoramus. 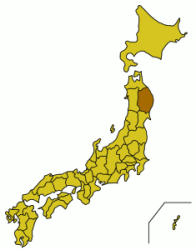 Located half a day's journey north of Tokyo in the rural Northeastern Tôhoku region, Morioka is the kind of city that you're most likely to visit "just passing through." While pleasant enough for a regional Japanese capital, there are lots more scenic and bucolic spots further afield. I've been through Morioka twice, both times spending the night by the station before catching the first train out in the morning. But both times I've been sure to fill my belly on plenty of noodles, because, um, what else are you going to do in Morioka? (Photo from www.moriokareimen.com) 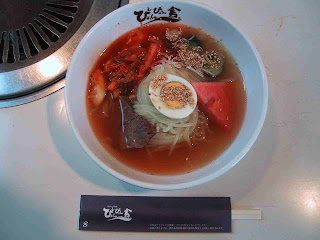 While many towns around Japan specialize in a particular kind of noodle or bowl, Morioka offers a veritable smorgasborg of noodle options. Best known among them is certainly Morioka Reimen - Korean-style cold noodles in beef broth. Back in 1954, a Korean-Japanese guy from the North Korean town of (I am not making this up) Hamhung opened a neighborhood restaurant in Morioka, serving an approximation of his childhood favorite of mul naengmyun - clear, stretchy lilybud flour noodles served in cold beef soup and topped with meat, kimchi, cucumbers, sesame seeds, and a hardboiled egg. Weirdly enough, I used to eat the stuff all the time when I spent my early teens hanging out at a Korean supermarket in the suburbian US. Long story. In any case, Hamhung Reimen didn't sound so appetizing, so the enterprising chef called the dish... 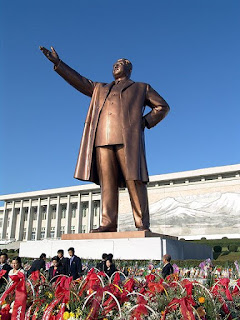 Pyongyang Reimen! For some reason, this name didn't catch on either, and although Morioka residents loved the stuff, hardly anyone else had heard of it until the 80s when some genius decided to call it Morioka Reimen instead. At some point a slice of watermelon found its way in there too. The cold noodles took off and rocketed to fame faster than a Taepodong missile, and when the media descended on Morioka, it turned out that the city had all kinds of other crazy noodles to offer to the nation. 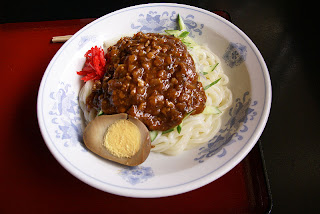 There was also Morioka Jajamen, an approximation of Northern Chinese zhajiangmian (Photo from Wiki). A Morioka resident who had lived in Manchuria during the colonial period brought back the Beijing staple of white wheat noodles topped with cucumbers and a meaty bean paste sauce, and the recipe would become the next of the "Three Great Noodles of Morioka."

The last of the three is Wanko Soba, which isn't so much an original noodle as a special way of serving it. The original all-you-can-eat menu item, Wanko Soba consists of a tiny bowl of traditional buckwheat noodles which is constantly refilled by a dutiful attendant after every bite. You try and down as many of the mini-bowls as you can, as the waitress tries to dump in the next bowl before you can finish the previous one. There's even a national Wanko Soba competition - the record is over 380 bowls in 10 minutes! 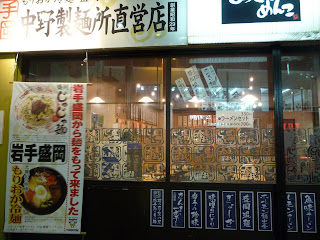 So, we've got Morioka Reimen, but what about Morioka Ramen? I never came across the stuff in either of my (admittedly brief) visits, but it's amazing what you can learn about a city hundreds of miles away by walking through your own neighborhood. I was cruising down Waseda-dôri just west of Takadanobaba and a sign caught my eye - Megusamenko: Morioka noodle cuisine! Already stoked, I eagerly flipped through the menu, finding of course the reimen and the jajamen (sadly, no wanko soba), but also a whole other set of Morioka noodles I had never even heard of before - jackpot! There was an intriguing salt ramen covered in lemon slices, an intense looking fully loaded miso ramen, as well as the rarely seen Morioka Onmen (warm noodles) - thin white noodles and cooked veggies in a thin soup. The reimen (cold noodles) are supposed to be some of the best in Tokyo - and probably the only ones cooked by a Nepalese chef! 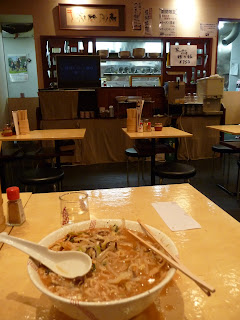 Megusamenko (whose name is allegedly a rural northern dialect for "an ugly beauty") is a sister shop of Nakano Seimen, which is one of the highest regarded reimen purveyors back in Morioka. But appetizing as the reimen sounded, I was here for the ramen, so I switched up my vowels and went for the gusto - kimchi nattô miso ramen (that's ramen with soybean paste, fermented soybeans, and pickled spicy cabbage, for yer information)! 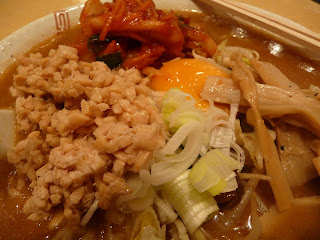 Now nattô has got to be one of the most infamous Japanese foods. Almost everyone who arrives on these shores is practically forced to try it just for yuks, and most totally recoil at the sound of the word. It's essentially rotten soybeans, brown, stringy, gooey, and rather foul smelling. I don't mind the stuff, at least in moderation, and I wanted the full Morioka ramen experience, so I figured what the hell. The bowl that arrived was almost as fully loaded as a bowl at the infamous Jirô. Besides the nattô and the kimchi, there are some tasty menma (bamboo shoots), plenty of moyashi (bean sprouts), plenty of onions, and, why the hell not, a raw egg yolk. 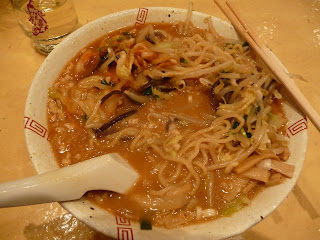 I did my best to mix it all together, slopping soup onto the table and getting down to business with this big ol' bowl. While not of the same uber-high quality miso as Junren down the block, Megusamenko's miso is certainly up to snuff, and the veritable landslide of toppings makes each bite a bit different from the bite before. The nattô loses most of its pungency when it gets mixed into the soup, and it really isn't objectionable at all, unless you really hate the stuff; it gives a nice earthy taste that works well with the tangy kimchi and the creamy miso. 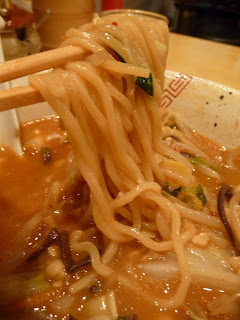 The noodles are medium-thick medium-curly and yellowish in the style of Sapporo ramen, which seems to be the base onto which all the rest is piled. I have no idea how "traditional" of a Morioka dish this stuff is, but I know I like it! Usually I don't like it when the toppings outweigh the noodles, but in this case, it felt more like eating a hearty bowl of country stew in which noodles served as the base. 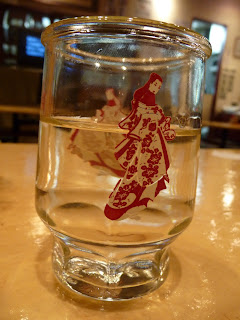 Between bites I took sips from my mini cup of my Nanbu Bijin sake. Morioka (like the rest of the Northeast) is reknowned for its high quality rice, which means it makes some of the best sake in the nation. Megusamenko offers a nice selection of tasty local Iwate sakes, all of which are available in pre-packaged "one cups" for only 450 yen a pop. 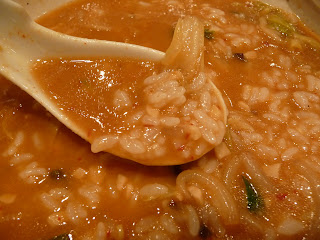 I still had plenty of my soup (stew?) left, so I ordered a bowl of rice to sop up the rest. All told, the bill came out a little bit pricier than your average bowl of ramen, but I was still full when I woke up the next morning, so it's all good. Overall, Megusamenko is rad, and I plan on going back to try all their other bowls. I really wish that there were more shops of this type - there are all kinds of obscure local delicacies from all over Japan, but even in Tokyo it can be hard to find restaurants (especially reasonably priced ones) to sample them at. More provincial countryside delicacy fast food now!
Posted by Nate at 10:44 AM

Kimchi Natto Miso Ramen? Dude, you're crazy! I so would have ordered the same thing! haha.

First of all, I envy the hell out of your life. Damn you! I shake my mundane fist at you!

Second of all, hell yeah. Natto!

Thirdly, that's right, thanks for giving credit to the Chinese for our amazing zhajiangmian.

I am hungry now.

y'all better believe that my butt smelled real good for 24 hours after this one.