After polishing off our bomb-ass bowls at BASANOVA, Brian, Keizo, and I took a stroll up Kanana-dôri in search of beer. Before too long, we caught a whiff of THAT SMELL. Then a couple minutes later, we found the smell's source. That's how it goes with a proper bowl of Hakata-style tonkotsu (pork marrow) ramen. I don't know how they do it, but something about the way they brew those bones gives off a powerful stench that is at once totally repulsive and highly appetizing, if that makes any sense. Nandenkanden is a pretty famous shop, and we half-joked about coming back later in the evening. Sure enough, after a few beers we couldn't pull away from that sickly seductive smell. 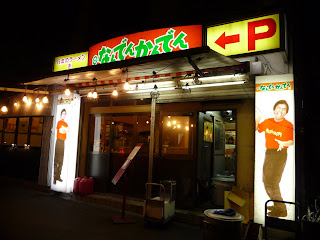 Where to even begin with Nandenkanden? It's semi-legendary / infamous as one of the first shops to take Hakata-style ramen from a regional northern Kyushu varietal to the level of mass popularity in Tokyo, helping to set off the "Hakata ramen boom" of the late 80s and early 90s. Kyushu Jangara Ramen had opened in Tokyo in 1984, but Nandenkanden's opening in 1987 met with high acclaim, and amassed so much popularity that it allegedly caused traffic jams on its lonely suburban Tokyo corner, even in the middle of the night. Apparently popularity with cab drivers propelled it to national fame. 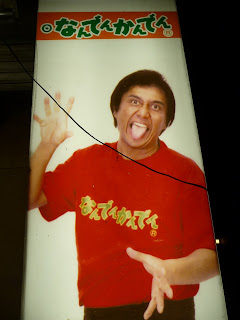 It would be impossible to talk about Nandenkanden without mentioning the existence of Kawahara Hiroshi, the founder of the shop, who has an extremely intense "wild and craaaaaazy guy" public persona. Based on his photo in front of the shop, we were all sure that he was some kind of Indian immigrant who had made good in Fukuoka, but it turns out he's just a really, really tan Japanese guy. Who knew? Kawahara left Fukuoka in the 80s to try and make it as a singer in Tokyo, but when that didn't work out, he opened up a shop selling the Hakata ramen he grew up loving. 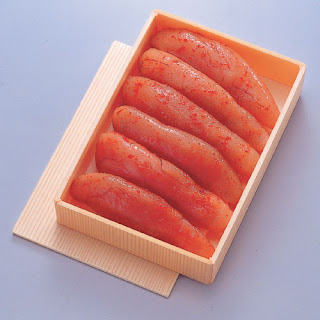 And as an added tidbit of knowledge, Kawahara's grandfather was allegedly the inventor of the now-staple food karashi mentaiko - spicy pickled cod roe.

So I guess it's a bit hard to separate the truth from the legend, but this Kawahara is definitely a crazy mother trucker. The craziness continues to the ramen itself, as in addition to more, ahem, traditional menu items, Nandenkanden offers "baka" items - I'm gonna go ahead and borrow Brian's translation of "stoopid", since I think it works perfectly. 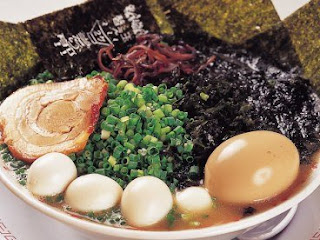 There's "baka tamago" (stoopid eggs), "baka nori" (stoopid seaweed), and "baka negi" (stoopid onions), plus "san baka" (the three stoopids) - we're talking so loaded with toppings that you can't even see the soup, let alone the noodles! "Nandenkanden" is apparently Fukuoka slang for "everything under the sun", so I'm guessing that's what's going on with that. Considering that it was already the second bowl of the night, we decided, wisely perhaps, to skip the stoopids and go for the classic bowls. 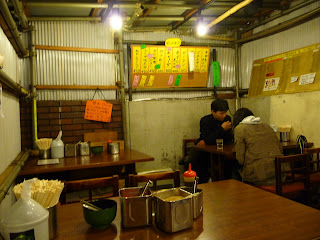 Inside, Nandenkanden uses corrugated steel walls and colored paper taped to the wall to go for what I'm guessing is an attempt to recreate the feel of eating in a lean-to shack near the river somewhere in Kyushu. Kurume Ramen Mutsumon, does something similar, but Nandenkanden's vibe is a bit scrummier, in a good way. Maybe since it's the burbs and they've got a lot of space, Nandenkanden is a bit more like a restaurant, and waiters come around to take orders. 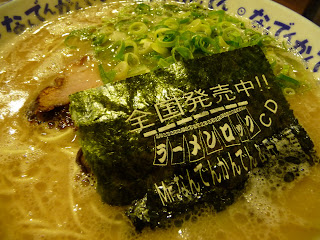 Never one to miss a chance for self promition, Krazy Mister Kawahara has even stamped ads for the new Ramen Rock CD onto the nori! The bowl comes with plenty of green scallions, but as any Hakata-style afficianado knows, a proper bowl has to get tricked out! 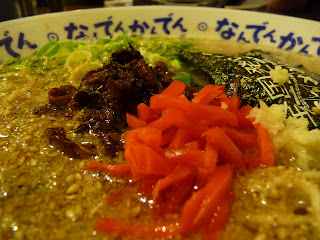 That means plenty of bright red beni shôga (pickled ginger), extra spicy takana (pickled mustard greens), a generous dousing of a ground sesame seeds, and of course, a bit of fresh crushed garlic. Nandenkanden's soup is pretty standard for Hakata ramen in Tokyo. Maybe a bit more "rustic" and unrefined (read: smellier) and less smooth and creamy than some other bowls around town, as well as a bit thinner, Nandenkanden's bowl is tasty but nothing earthshaking. 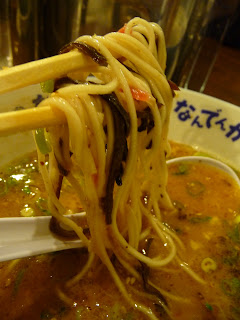 To be honest, I can't say I was tasting a whole lot of the soup. Between the full loading of toppings (which I may have gone a bit overboard with, considering the fact that I woke up with the taste of stale garlic still in my mouth), and the copious amounts of beer I had just drank, my tastebuds weren't exactly firing at Frank Bruni level. 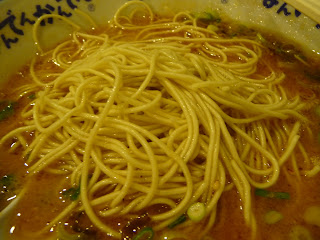 But that didn't stop me from ordering a kaedama (extra helping of noodles)! 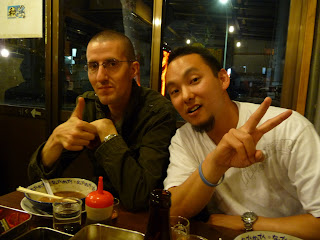 I've said it before and I'll say it again - this is ramen at it's truest. I love all the fancy stuff and experimental bowls, but when it comes down to it, ramen at it's finest is food to be eaten with dudes after sharing many beers. Nandenkanden that night wasn't the place for dissecting the finer points of the soup. It was about sharing noodles and love for noodles with new friends before making a mad dash to catch the last train.
Posted by Nate at 10:15 PM

Great post! I still can't get over all the research you do. It's awesome! Btw, who are those good-looking guys in the last pic. hahaha. Damn, that was a fun night!

I dunno who those guys are...I was just trying to take a photo of the window, then they jumped in the frame at the last minute!

Mad dash indeed. Saved myself a 3000 yen cab ride by about 1 minute.