Another day, another bowl close to campus between bouts at the library...can you tell that I have a deadline coming up? It was about 3.30 PM, kind of an ambiguous hour when a lot of shops are closed after lunch service but not yet open for dinner. 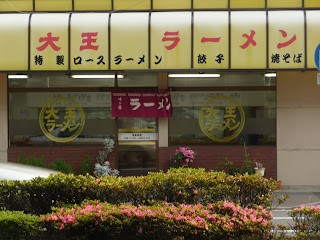 Saddled with the (not altogether unenjoyable) task of finding a shop that was not only open but uneaten, I found myself at Daiô Ramen, located on Shin-Mejiro-dôri just down the hill behind campus. Apparently it's famous for it's generous helpings of rôsu, cuts of pork short loin a grade above standard châshû. Not that my non-meat-eating self would know. "Rôsu ramen" is on the sign out front and about half of the menu consists of some kind of rôsu-topped permutations, and that definitely seems to be what people come to Daiô for. 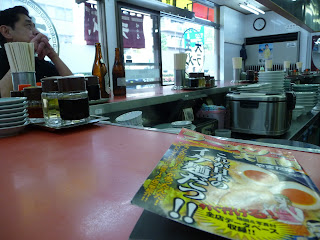 Daiô (Great King) is a pretty standard old school ramen shop of the no-frills variety. A long counter wraps around a large central area where you can see all the preparation going down. Sitting at a low counter and watching your ramen being prepared is another one of the special charms of repeat ramening - feeling your appetite build as you watch the noodle artistry go down. Unfortunately, the scene at Daiô wasn't so appetizing; a woman sat patting huge tubs of somewhat stale and pasty looking miso, while the man put something black and dirty-looking in a blender. Joining me at the counter was an older man well on his way to getting drunk, eyes half-closed as he absent-mindedly chewed on some pork. 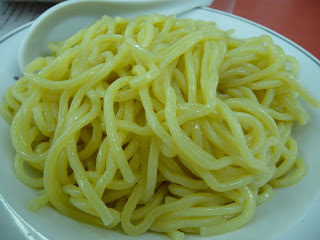 All major ramen varietals were on offer, as well as tsukemen, but tsukemen seemed to be taking center stage on both the menu and the reviews on the Supleks ramen database, so I ordered a bowl of miso tsukemen, which is something of a rarity to find. In addition to regular thick noodles, you can get thin noodle tsukemen, or even hisui tsukemen - I had mistakenly thought "hisui" meant "flat", but when I got home and looked it up, it turned out to mean "jade", so that means green noodles! I'm guessing they make them similarly to the more well-known chasoba (tea noodles), but I'm not sure if there's any difference in taste, or just the visual impact. 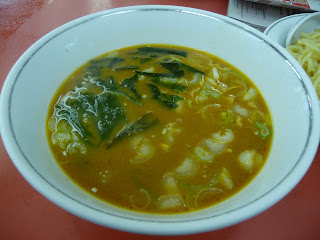 When the dipping soup for my tsukemen arrived a moment later, I was shocked at the size of the bowl; rather than the standard mini-bowl of thick dipping broth, I got a nearly full-sized bowl of what appeared to be a thinner miso broth. Thinking that perhaps "tsukemen" at Daiô meant nothing more than a bowl of ramen with the noodles served on the side (which is emphatically not the case for quality tsukemen), I took a cautious sip of the soup before dipping. Way salty. Way way way salty. Tsukemen broth tends to be more concentrated since it isn't meant for drinking directly, but this wasn't strong so much as just too salty, and, um, not very tasty. 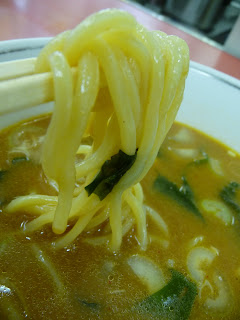 Excitement quickly flagging, I dutifully dipped and ate. The noodles were actually of higher than average quality, and the soup wasn't terrible, but it just tasted kind of cheap. Daiô's broth was no rich Sapporo-style porky miso like at Junren or Uoranzaka, but closer to an over-salted homestyle miso soup with too much wakame seaweed floating around inside. I sat flipping through an issue of "Ramen Daihyakka", a new ramen-themed comic that introduces tasty shops around the country, wishing I was eating at one of those tasty-looking places rather than at Daiô. The whole scene was a bit depressing, with the drunk guy in one corner, the sad miso scooping lady in another, and the goofy gaijin on the other side of the counter. 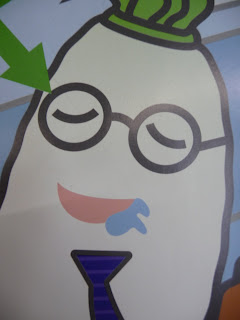 So, sorry Daiô ramen, but you didn't do it for me. That said, it's quite possible that the standard tsukemen broth is much tastier than the miso. And the rôsu meat ramen really does get high reviews and lots of love around the web, so if plenty of pork is your thing, by all means give Daiô a shot. Maybe I just caught them at a bad time and ordered the wrong thing? Oh, and I don't know why that radish is sleeping either. Or why it's wearing a tie.
Posted by Nate at 5:23 PM