Imawano Kiyoshirô died last week. Japan has lost a legendary rocker, a crazy personality, an LSD ("Long Slow Distance") bike rider, a tireless advocate for the place of politics in music, and so much more. Since founding the band RC Succession in 1968, Kiyoshirô carved out a unique place in Japanese rock history, walking and rocking on a path of his own. Wearing brightly colored make-up and bounding all over the stage, there was no one else quite like Kiyoshirô, but late last week, he lost a long, hard-fought battle against lymphoma and went to the big rock club in the sky at the too-young age of 58. Enjoy his pisstake cover of the Japanese national anthem:

Kiyoshirô was my friend K's hero, and he was the one who inspired her to start her own band. I joined my pals S, Y, and the rest of the crew in a gathering to light incense for Kiyoshirô, and we spent the day chatting, catching up, and talking about what a righteous dude he was. When night fell, we headed to a local pub to toast him and grab some dinner. S, Y, and I hopped on the subway to head home, but we had barely made it a station before someone floated the idea of stopping in Ikebukuro for a bowl of ramen on the way home... 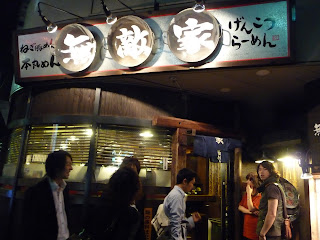 After a bit of googling around on our cellphones, we decided to hit up Mutekiya ("House with No Enemies [presumably because they have all been vaniqushed]"). Every time I bike to the 'Bukuro, there is always a line around the corner, any time of day or night. And that night was no exception, as about 15 people were queued outside. 15 turned out to be a bit too many for Y, who decided to skip the ramen and head home early. S and I dutifully waited, poring over the menu options and putting in our orders well before we got inside, so that our bowls would be waiting once we finally got seated. 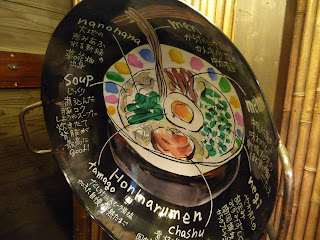 Mutekiya has got a drillion different options, but all are based more or less on the same fundamental tonkotsu shôyû (pork bone and soy sauce) soup - it's just a question of which permutation and combination of toppings you want - in addition to the standard toppings like extra nori (seaweed) and châshû (pork), there's two different kinds of onions, fried garlic chips, and the like. S and I both stuck with the basic original genkotsu ramen, taking advantage of the free upgrade to ômori (large size). Genkotsu refers to the use of extra pork knuckles in the soup. Which is frankly not how I would advertise anything. I try and AVOID thinking about the nitty gritty (as it were) of the pre-liquid forms of the ingredients of my soup. Especially if it's, um, pork knuckles. 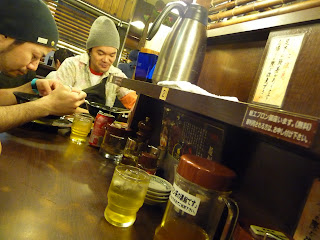 But hey, that seems to be what packs 'em in at Mutekiya, as the place was hopping with mostly people in their 20s and 30s either carbo-loading before drinking until the first train, or desperately trying to pack calories into the stomach before the last train, thereby making said train ride that much less dizzying. 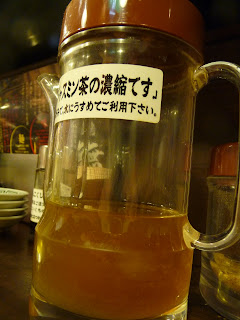 Note the little pitcher of extra strong jasmine tea as a beverage option. 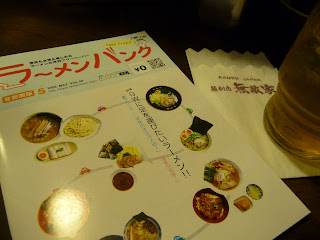 Also note the presence of Ramen Bank magazine, a tell-tale sign that a shop is (or at least wants to) transcend the local clientele base and tap into the metropolitan ramen scene. The little napkin says "creative noodle kitchen," and that's where this reviewer begs to differ... 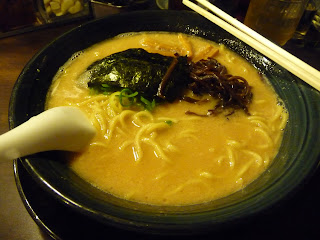 On first appearance, Mutekiya's bowl looks a bit like Yokohama ie-kei ramen - not overly heavy tonkotsu shôyû, packed with medium thick noodles on the yellow side. The shop name also contains the usually telltale 家 character, but ie-kei this ain't - none of the rest of the factors (extra ginger, spicy bean paste, extra nori) are there. Actually, the small helping of kikurage (wood ear slices) made it look a bit like the bowl I had eaten the night before at Kaburaya. 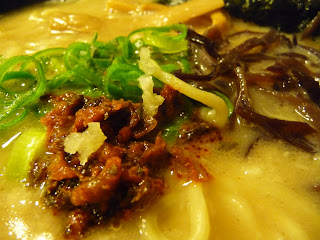 I dashed on a bit of the "extra spicy" pickled takana (mustard greens) and took a sip. Disappointment. There was nothing special about this soup, no tokuchô (defining characteristics). As S noted, it was a bit sweet, and not necessarily in a good way. I had tasted this soup before, it felt like dozens of times, though not recently. Then it hit me - Ryowa. Ryowa was my local go-to ramen joint in Mountain View when I lived in the Bay Area. A pretty legit little ramen shop for the States, Ryowa had all the basic varietals executed cheaply and competently enough, plus a good vibe with a huge wall of manga to read while you waited. But a good bowl of Tokyo ramen it ain't. 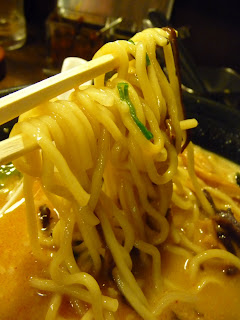 Thus, I'm sad to say, that I ate my first bowl of ramen in Japan that made me think - I could get this in America. Don't get me wrong, it wasn't terrible, just very boring. S and I just couldn't figure out why this place is so popular. Keizo over at Go Ramen offered an interesting solution when I talked to him later that night - "Japanese people love waiting in line." I gotta say, I'm thinking this is the kind of place that people line up for because other people are already lined up for it. It feeds on itself, and before long you've got a mediocre bowl of ramen with a line down the block at 1 AM. 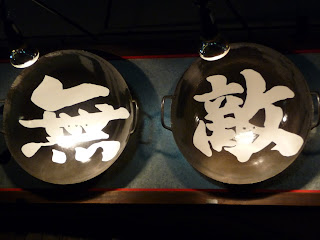 There's nothing "bad" about Mutekiya. But there's nothing good about it either. It scratched our itch for the night, but it left us disappointed - we'd had such high hopes! Mutekiya is basically a "famous ramen shop" for people who don't generally eat ramen, know about ramen, or care about ramen. You're out drinking one night with pals, they cajole you into stopping in for a bowl, you see the line and think "this place must be good," you eat it, you have no standard of comparison, and the next day you tell your friends, "I had a great bowl of ramen last night." This is by no means hating on people who aren't regular ramenistas, just irritation at a place that tries to sell a "special ramen experience" without delivering the product.
Posted by Nate at 9:52 AM

Wow, this shop brings me back! This might be the first ramen shop I waited in line for, and dare I say it, the one that inspired ramen mania in my heart. It's across from a giant bookstore I used to frequent. A couple years ago they had a special bowl with like 3 kinds of pork in it; regular, stewed, and a big ass pork meatball. I remember it being awesome. I'll check it out again next time I want to buy a book.

oh man! i didn't mean to be a hater on a place near and dear to your heart! maybe i was a bit harsh? i guess i just set my expectations too high since i had passed it by so many times...i think i was expecting nothing short of amazing.

that bookstore (Junkudo) IS amazing though!

Good to read this as I had a similar experience (and I'm no ramen guru-so don't trust my judgement). Are there people here who really don't eat much ramen? Impossible! I also thought it was fine but I think as you point out, its the constant long lines that set high expectations and when you don't see those lines at other places where the ramen is at least as good, you wonder. On top of that, they screwed up my order completely. I've not had that happen anywhere before. I did appreciate the Omori though-and I think the long-line thing is universal or maybe instinctual. Sometimes I'm tempted to stand in long lines just cuz they're there. Ditto on junkudo.