May 3rd is "Constitution Day," another one of Japan's countless national public holidays. Except unlike on "Ocean Day," "Green Day," "Kids' Day," or "Respect for the Elderly Day," people THROW DOWN on Constitution Day. That is to say, the left wing and the right wing hit the streets for some serious protests. Add that to the fact that Constitution Day follows hot on the heels of May Day, and you've got the spring season's all purpose political rally day. 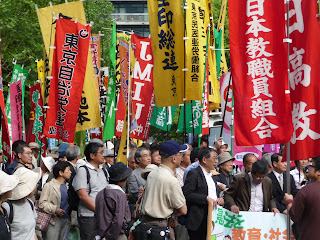 I spent the first part of the afternoon in Hibiya with aging labor unionists, 60s protest veterans, and my grad school comrades, listening to the Socialists, the Communists, the winner of the Nobel Prize for Physics, and an Ainu jew's harp player. They (well not the jew's harpist) delivered impassioned speech about the necessity of Article 9 of Japan's postwar constitution, which prohibits Japan from waging war or deploying troops abroad, and has become a hot button issue, with right wing factions trying to change the wording, thus allowing Japan to fully remilitarize. The demonstration was pretty low key, in stark contrast to the phalanx of rightwing nationalists circling in their loudspeaker trucks down the block: "Admit it! You love North Korea!" 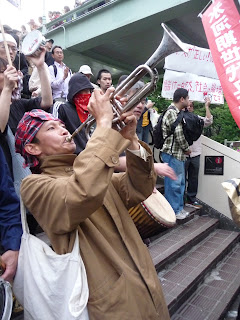 In the afternoon, I met up with Brian from Ramen Adventures and Schultz of Tokyo Damage Report to check out the scene across town at the protests in Shibuya. In contrast to the aging lefty geezers in Hibiya, the Shibuya crowd was much younger, more colorful, and louder, banging on gongs through the streets of Harajuku and campaigning for increased rights for temp workers and casual laborers in addition to waving banners for Article 9. I guess what I'm trying to say is that after all this walking and fist pumping, I needed rejuvenation! I needed ramen!! 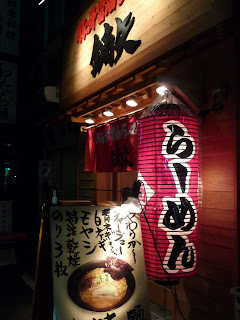 Needless to say, Brian didn't need any convincing, so we started scouting around. Central Shibuya is loaded with ramen shops, but it tends to be quantity over quality, since throngs of teens with dye jobs don't tend to be the most discerning consumers. But Brian flipped the script on me and showed me where all the quality bowls were hiding - BEHIND the station. Rather than walk towards Harajuku or down the tracks towards Ebisu, follow Meiji-dôri south into Shibuya San-chome and Yon-chome, and before long you'll find yourself in hidden ramen shop heaven. There must be at least a dozen shops lined up down two blocks of the road, a veritable gekisen-ku (fiercely competitive zone). 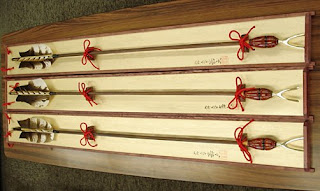 There's a Asahikawa-stylez Santôka branch, a Kitakata ramen purveyor, a shop run by reknowned ramen critic Ishigami Hideyuki, an outlet of tsukemen contender Yasubee, and many more, but we decided to give Kaburaya a shot. The name refers to a kind of cover attached to an arrowhead, but your guess is as good as mine as to what that has to do with a bowl of noodles. 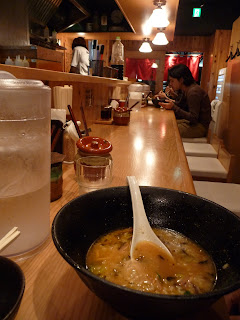 We walked into a clean, comfortable, blond wood room, and got our bowls, both of us sticking with the house special of tonkotsu shôyû (pork bone and soy sauce soup). 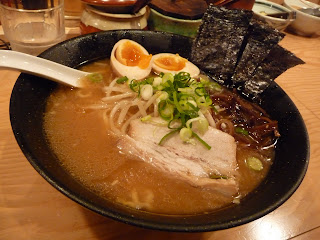 A quick survey of the bowl's contents pointed in a few different directions - there's the three pieces of nori and the thin layer of oil like Yokohama ie-kei ramen, but then there's the small mass of kikurage (wood-ear mushroom slices), which are usually only seen in Kumamoto ramen... 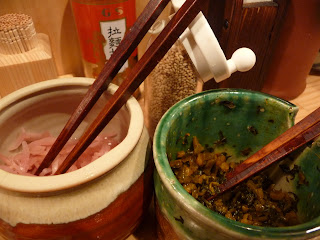 ...and to make matters more confusing, the additional toppings laid out on the table are akin to those found at a Hakata ramen shop, namely a sesame grinder, fresh garlic press, spicy takana (mustard greens), and even pink slivers of pickled ginger. 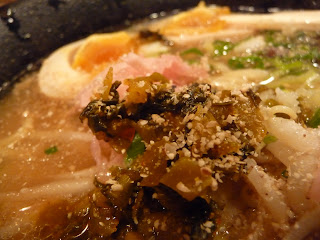 But don't take that as complaint! Rather than trying to be something it's not, Kaburaya's bowl just draws on different traditions to add layer after layer of savory tastiness. The soup is a bit thinner and less heavily greasy than a standard tonkotsu bowl, and while, it might not be mind erasingly delicious or original, it sure as hell tastes good! This was a bowl needed for sustance after a long day on the feet, and we both felt amply rejuvenated after a few sips. 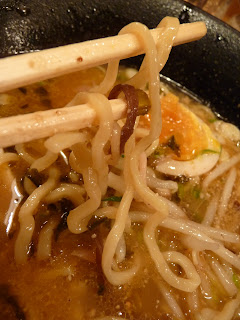 The noodles were nice and fat, but not overly so, again not dissimilar to the classic ie-kei style. Nothing about this bowl blew me away, but both Brian and I kept eating and eating... 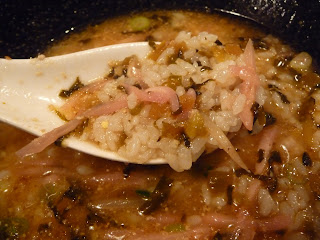 ...until we looked at each other and both decided to finish with some ramen rice. This is the perfect kind of bowl for dumping in a bit of rice at the end - strong but not too thick and loaded with plenty of toppings to get something akin to zôsui (rice casserole). 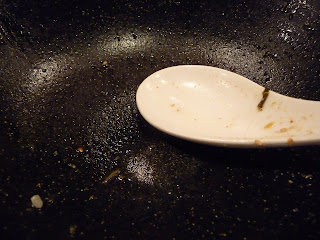 I guess we must have both liked what Kaburaya offered, since we both drank our bowls down to the dregs. A worthy contender and definitely a good option if you're in Shibuya and don't mind hoofing it a few hundred meters. Now to follow Brian's lead and start working my way through the rest of the shops on this heretofore hidden block...
Posted by Nate at 8:18 AM