Last week, some of my scholarly homies and I were engaged in the decidedly unscholarly pursuit of drinking beer and rocking out to ripping thrash from the likes of hardcore superstars UG Man and Charm.

There was plenty of headbanging, plenty of fistpumping, and a fair bit of moshing. The evening also featured an unexpected appearance from movie star Asano Tadanobu (Ichi the Killer, Mongol, every Japanese indie-esque film of the last decade), who, it seems, fronts a dual-vocaled fastcore band of his own. After the show ended and things wound down, the crew (which did not include any movie stars, mind you) decided to head to Ikebukuro for another round. 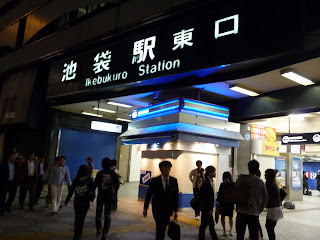 Not wanting to get stuck after the last train, I decided to take my bike, racing the train from Okubo to 'Bukuro. Somewhat to my own surprise, I arrived first, though I'm guessing the result has more to do with the amount of the time it took the rest of the group to navigate Ikebukuro's labyrinthine underbelly, rather than reflect some John Henry-like feat of man versus machine on my part. 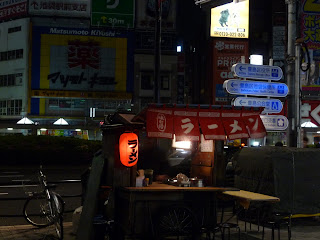 Just south of the east entrance to the cavernous station complex flickered a red lantern that I knew would get the better of me. I had five minutes to spare. There was a guy selling ramen on the street. I couldn't say no. I pulled up a stool to the little table next to the wooden pushcart and put in my order. 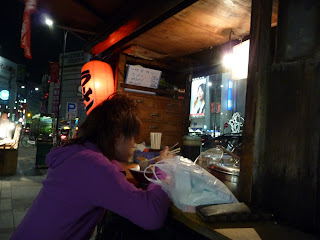 I had one other dining companion, that is if you don't count the everpresent face of the idol Horikita Maki, who seemed to be gazing down from three gigantic billboards at once. Somewhat unusually for a little stall (yatai), miso ramen was on offer in addition to the classic Tokyo-style shôyû (soy sauce), but I stuck with the original. 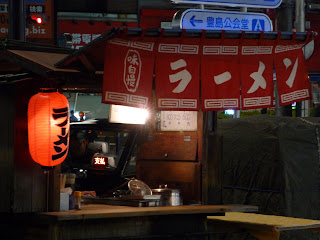 I sat perched on the stool in the night air just the right side of cold and waited for my bowl and my friends to show up. As it turned out, the latter arrived before the former, so I told my buddies I'd catch up with them soon - I had ramen to eat. I hadn't eaten at a yatai stall in a long time, so it was nice to sit and watch the old man do his thing basking in the glow of the late-night neon while watching the rest of Ikebukuro rush for the last train. 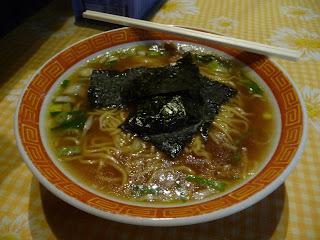 A few minutes later the bowl came up, and I took a slurp. Nothing special, but it sure hit the spot. Thin, warm, refreshing, salty soy sauce soup in the classic Tokyo tradition. Just the kind of thing to warm you up after a night of drinking up and rocking out. Nowhere near as complex as an Ogikubo-style bowl like Harukiya, this stand's soup was a lot more "Chinesey" in taste, almost sweet. 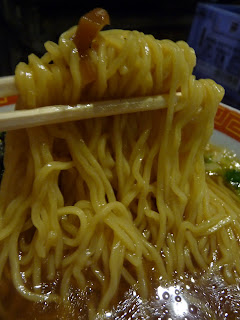 It crossed my mind if the cook himself might be Chinese, as the Chinese characters for lamian were written under the Japanese on the menu. It's also possible that the cook just knows his clientele - Ikebukuro is the fastest growing Chinatown in Japan. The other tipoff was the consistency of the noodles - they were waaaaaaay waaay soft. The image of Chinese noodlers is that they don't prefer their noodles nearly as firm as Japanese slurpers. I'm not jumping to any conclusions, but I feel like this truism actually might be true. The noodles clumped together a bit too much, and were, let's be honest, pretty weak, but for their role as comfort food to knock the taste of beer out of my mouth, they worked. I took a last sip, thanked the cook, and found my pals. 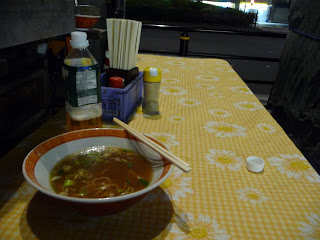 Overall, I'd have to say that these noodles came the closest to reminding me in taste and quality of my old days when I lived on bowls of Maruchan and Top Ramen "Oriental" flavor instant ramen. Which is to say, I probably wouldn't plunk down another 600 yen at this particular stall. But hey, who can put a price on eating noodles outside at midnight on an unseasonably warm night?
Posted by Nate at 1:50 AM