Another day another dish. Or should that be another belly another bowl? I was studying at the main library on the Waseda campus and wanted to dash out for some tasty sustenance to help me power through the piles of prewar publishing histories. 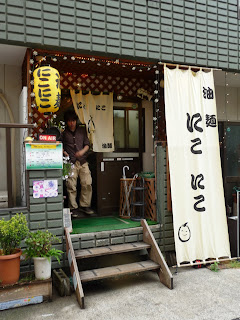 Fortunately, Niko Niko was just around the corner. Just down the hill from the library is a big bike parking lot - dip down the alley next to the lot and Niko Niko will be on your left. 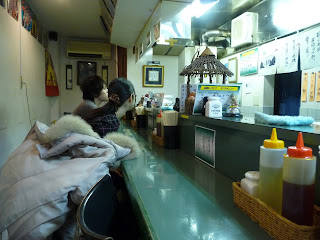 Inside, Niko Niko is one long counter, with seats on the left and a cooking area on the right. Like Inaho, Jumbo, and other places close to campus, the lion's share of the slurpers Niko Niko gets are Waseda students. I was easily the only person over 22 in the shop...except of course for the single middle-aged chef bopping his head along to the soundtrack of Japanese blues and 60s and 70s American pop. 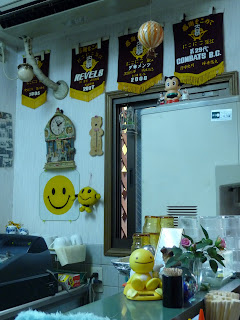 The place is done up in a way that's about half student clubhouse and half rock bar, with sports banners hanging on one wall and LP covers tacked to another. Then there's the ample collection of bright yellow smiley face memorabilia - Niko Niko means "smile." 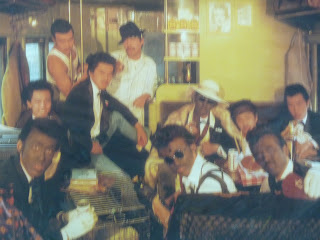 Not all the smiles are "yellow" though...I scanned over the mostly unfamiliar Japanese 80s rock album covers, and one stuck out in particular. It might be hard to see for the blurry photo, but, um, yeah, those ARE Japanese guys in blackface. It could be worse, they could be selling toothpaste with Sambo on the label... 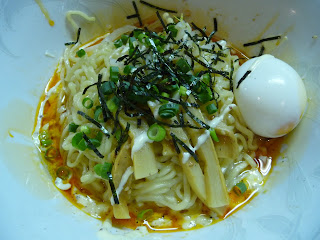 Niko Niko specializes in what they call "abura-men" - soupless noodles. These day, the synonyms "abura soba" or "mazesoba" (mixed soba) are more common, but Niko Niko has been serving these "oily noodles" since way before it was cool. In the last two years or so, abura soba has become all the rage, thanks to shops like Junk Garage, but Niko Niko has been serving their ramen sans shiru (broth) at least since 2002 if not much longer. The place definitely has a bit of a "lived-in" vibe, and I'm willing to bet there are a lot of hungry students who are regular visitors. 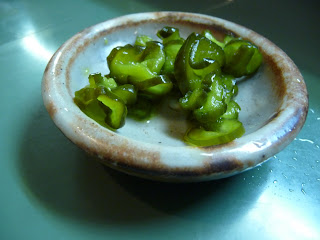 But why not become a regular when you can get a big bowl of scrumptious noodles for about 600 yen? To sweeten the deal, the lunch set comes with a little plate of pickles... 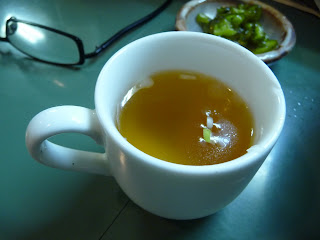 ...and a tiny teacup of tasty soup to cleanse the palette. 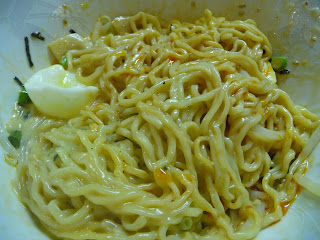 According to the menu, soupless noodles are "healthier in vitamins and lower in calories" than standard ramen, but I have a hard time believing in the physiological benefits of a bowl of noodles tossed with egg, pig extract, and mayonnaise. There are also little containers of spicy oil, vinegar, and black pepper to adjust the noodles to taste, but honestly, it's hard to go far wrong, since Niko Niko serves up a tasty savory mess. There are a bunch of styles to choose from - basic, mayo, extra spicy, curry, kimchi, and mentaiko (cod roe), though the last two aren't available with the soup and pickle combo for some reason. I may have to find my way back to try all the other flavors. Niko Niko has ramen on the menu too, but I'm guessing that's more pro forma than anything else. 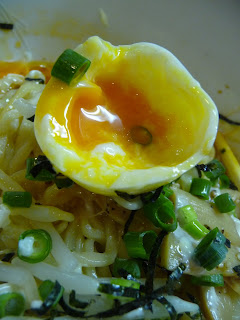 And the egg. Good sweet lord, the egg. Every bowl comes with a choice between a small bowl of rice or a soft-boiled hanjuku tamago. Just take a look at that beauty, orange insides all oozing out all over the damn place. Hands down one of the best eggs so far. 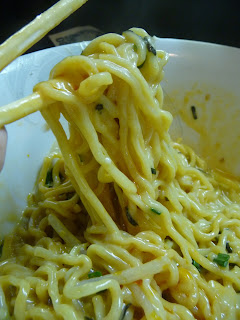 It's hard to find much fault in something as salty and satisfying as just a big mess of chewy thick noodles tossed in oil. I could have done with a few more toppings besides just onions and menma (pickled bamboo shoots), but no big deal. All in all, Niko Niko may not have been quite the over the top revelation / calorie bomb that Bubka's abura soba was, but these were high caliber soupless noodles. I know where I'm going whenever I need a calorie injection while working at the library...
Posted by Nate at 7:25 AM

there's that gorgeous egg again. this made my mouth water.

i ate it myself and i'm still drooling looking at it...

China and Russia put the blame on some screwed up experiments of US for the earthquake that happened in Haiti.
Chinese and Russian Military scientists, these reports say, are concurring with Canadian researcher, and former Asia-Pacific Bureau Chief of Forbes Magazine, Benjamin Fulford, who in a very disturbing video released from his Japanese offices to the American public, details how the United States attacked China by the firing of a 90 Million Volt Shockwave from the Americans High Frequency Active Auroral Research Program (HAARP) facilities in Alaska
If we can recollect a previous news when US blamed Russia for the earthquake in Georgio. What do you guys think? Is it really possible to create an earthquake by humans?
I came across this [url=http://universalages.com/hot-news/what-happened-in-haiti-is-it-related-to-haarp/]article about Haiti Earthquake[/url] in some blog it seems very interesting, but conspiracy theories have always been there.

Greeting for the day!!

I just joined this good site. Loads of individuals have added so many good things here. Please accept my little contribution towards community. I would like to share some [url=http://www.weightrapidloss.com/lose-10-pounds-in-2-weeks-quick-weight-loss-tips]quick weight loss tips[/url]. If you wish to know how to lose 10 lb in a week, you are believably not seeing for a standard diet and workout plan. You can lose weight with a basic diet and exercise plan, Still this requires a lot of time doing utmost cardio practises and adhering a strict diet. Here I will draft the perfect steps that I took to lose 10 pounds in just a workweek.

1. Keep Distance from all deep-fried foods for the week
2. Drink In an 8oz glass of Citrus paradisi with breakfast every day. (this speeds up up your metabolism)
3. Consume fair portions (stop consuming when you are full)
4. If you are eating 3 huge a meals a day, take 5-6 smaller meals to keep your metabolism up and keep your body burning fat.
5. Do not eat anything after 9pm. Its good to eat before 9 P.M. so that our body gets proper time to burn calories before sleep.
6. Have a proper sleep everyday. Not having plenty rest causes been proved to be a ranking element to the body putting up excess fat.
7. Utilise a body/colon clean for the 7 days. This will get rid of unnecessary fat stored close to the stomach area as well as cleanse your body of harmfull pollutants that makes you store fat and feel tired. Flush away excess pounds around the stomach area that otherwise would be hard to lose.
8. I suggest you using Acai Berry Diet Pills. This one is proven to work, and you can get a free trial.
9. For those man's/womans who want to burn fat quickly, avoid alcoholic drink.
10[url=http://www.weightrapidloss.com/lose-10-pounds-in-2-weeks-quick-weight-loss-tips].[/url] A low GI diet is an outstanding method of burning fat quickly.

Hi everybody! I don't know where to start but hope this place will be useful for me.
Hope to get any assistance from you if I will have any quesitons.
Thanks in advance and good luck! :)

I wonder how your blog got so good. This is really interesting to be here, lots of useful articles for everyone. One thing I just want to say is that your Blog is so cool!
Good Day dear Admin
--------------