One of my favorite things about wasei eigo (Japanese English) is how you can attach the prefix za ("the") to almost anything. You can have "za" ramen, "za" single malt whisky, "za" magician, "za" pizza, "za" hamburger, "za" condominium, "za" dash, "za" 21st century...you get the idea. "Za" goes beyond the simple English meaning of "the" and is also more of a "thee", as in "thee" definitive example of whatever it refers to. A pal of mine would always pepper his Japanese with excessive za's for effect; funnily enough, his name is Zane. And then there is "za" whole set of Japanese bands using "za in their names - Za Spiders, Za Tigers, and not least of which, Za Mops, who I recommend as a soundtrack to this post.

Not that any of that helps me figure out the story behind the newest place to open on my block - ZA za za, or as the sign helpfully translates, "THE the the." 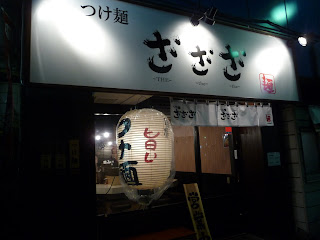 Za za za opened up at the beginning of the month, but since it's so close to my house, I'd been saving a trip for sometime when I didn't feel like venturing further afield. Just such a day came about last week, as I had been working at home all day then suddenly realized that I was hooooongry.

I can't say that I was too excited about Za za za, it being a tsukemen (dipping noodle) only shop; it would have been nice to have a proper souped-up ramen place just around the corner instead. But hey, you've gotta eat with an open mind. Za za za's menu is simple - basic tsukemen with a thin fishy broth, yuzu tsukemen, which is the same thing but accented with Japanese citron, double spicy (karakara) tsukemen, and then mega spicy (gekikara) tsukemen. I'm not sure what happened to single spicy soup, but I wasn't complaining either, since my philosophy tends to be the spicier the better. I was curious how Za za za would stack up to Baba's other spicy tsukemen specialty shop, Takagi-ya. 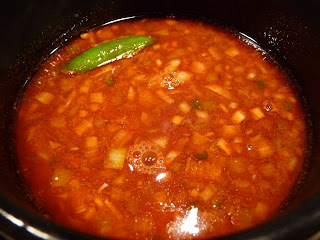 I was the only customer for the majority of my time in Za za za, but that seems to be an unusual state of affairs, as it seems to be packed most days around lunchtime. When my bowl came out a few minutes after sitting down, I was served up what looked a lot more like a spicy Korean chige (casserole stew) than a standard bowl of tsukemen broth. Like a Korean dish, it was served in a clay pot, which keeps the soup piping hot. Floating amidst the bright red broth was a single long green chili pepper amidst a sea of onions. My expectations rose. 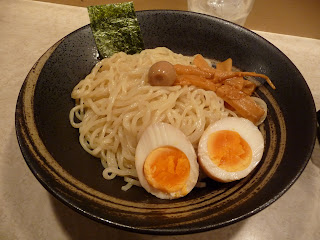 And they rose further still when I got my plate of noodles, garnished with a sheet of nori seaweed, a few sprigs of menma (bamboo), and a tiny quail's egg laid on top, in addition to the extra chicken egg I had ordered. The menma turned out to be some of the best I've had so far, super fresh and bursting with woodsy flavor. The egg, while not quite as soft in the middle as I like, was also of high quality, and delicious after a dunking in the spicy broth. 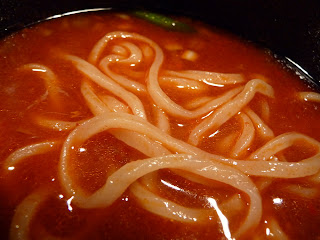 So I loaded some noodles in the soup and started slurping. Tastewise, the Korean connection continued - the taste of the broth was nearly identical to the sweet and spicy pepper sauce you see in a lot of Korean cooking. Za za za owes comparatively little to the classic Taishôken style tsukemen, and it's also a far cry from Takagi-ya, whose broth is much more viscous and vinegary. 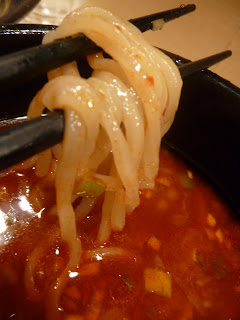 The noodles themselves were medium flast, medium thick, and whiteish, again a bit different from the megafat yellow noodles that you often get with tsukemen. Overall, it really really worked for me - the soup was spicy for sure, but just spicy enough to tingle the taste buds and keep you going, definitely not the same level of heat that a shop like Nakamoto packs. I felt like the quality of each of the individual ingredients was high, and that a lot of thought had gone into this bowl - while Za za za is definitely riding on the high tide of the tsukemen boom, their stuff isn't cookie cutter. 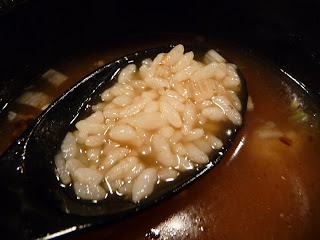 As an added service, Za za za dishes up a free bowl of ojiya after you finish your noodles; not quite sure what that meant, I nodded yes, and a minute later was presented with ANOTHER bowl of soup, this time a thinner broth. Apparently ojiya is what you get when you use soup to wash the toasted rice out of the bottom of the pot - if you aren't full from the noodles, you will be after slurping down some of this soupy rice. The taste was a bit thin, but it was a refreshing finisher. 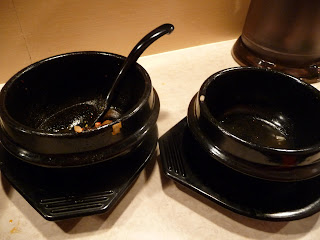 In the end, I drank both bowls down to the last drop, so I guess you could say I liked Za za za. Maybe not worthy of pilgrimage from across town, but a nice place to have around the corner. When the waitress cleared my bowl, I noticed her accent - she was Korean too, so maybe the whole place is a Korean-run business? Tokyo's main Koreatown of Okubo is just one station away, and Takadanobaba is a major immigrant center as well, with lots of students and workers from all over Asia at most shops and restaurants up and down Waseda-dôri. In any case, Za za za is za new kid on the block, so get down there and spend za money on za noodles!
Posted by Nate at 7:07 PM