I had been itching to get out of the house, so I took my bike for a spin down to the Kandagawa, once one of the major rivers of Tokyo, now reduced, like most other waterways in Japan, to a cement canal. 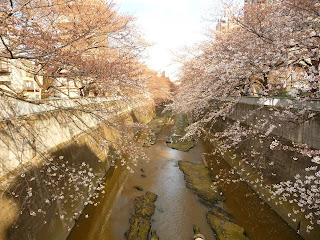 The cherry blossoms had just started blooming, and they lined both sides of the canal, making for leisurely cycling along the "banks." I took my time, shooting photos and stopping to read the poems taped to the fence by the trees, before suddenly realizing that it was already after 2 PM and I was famished, so I upped my speed and headed down Shin-Mejirô-dôri to find some ramen. I figured that as long as I was in the neighborhood I might as well try and tackle an out of the way shop in the area behind the Waseda campus, a zone which I had so far largely ignored. 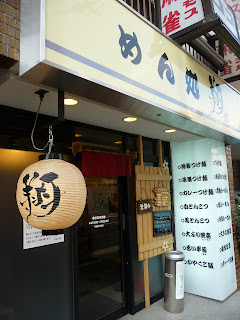 The first shop I passed was Men-dokoro Shô, whose name uses a relatively obscure kanji that roughly translates to "fly away." Upon sliding open the door I caught site of a big yellow board of nearly identical looking menu photos, not unlike what you might see in a skeezy Chinese takeout joint across the street from housing projects in New York. But you know, classier than that. 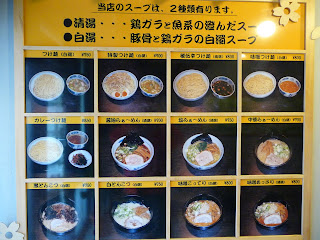 Shô is the kind of shop that serves every possible variety of soup a customer might want - thin miso, thick miso, white tonkotsu (pork marrow), black tonkotsu, shio (salt), shôyû (soy sauce), tsukemen (dipping noodles), spicy tsukemen, miso tsukemen, curry tsukemen, and something called "Chinese ramen." The lighter soups use a chicken and fish "clear soup," and the heavier use a pork and chicken-based "white soup," which are based on the old-school Chinese soup designations of qing tang and bai tang. 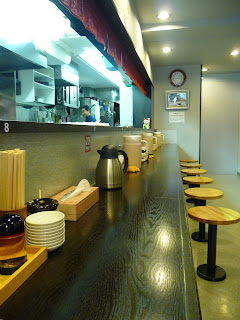 Curry tsukemen sounded the most interesting to me; I try to only eat miso and tonkotsu ramen at shops that specialize in those broths, and you can get shio and shôyû ramen anywhere, so I figured I'd go with the option that most places don't offer. I gave the cook my ticket and sat down in the deserted restaurant. Shô is clean, simple, and spacious, with a few tables in addition to the counter. The lack of customers wasn't particularly surprising given the fact that school was on break; and besides, 3 PM isn't exactly rush hour. A few diners trickled in as I waited. 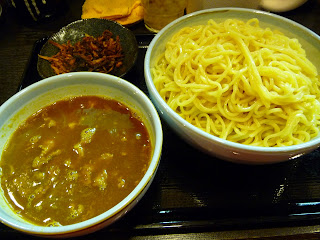 About 10 minutes later, my bowl, or rather, bowls, came over the counter, served on a simple laquer tray. The biggest bowl was, of course, filled with moderately curly medium thick yellow noodles, and the smaller with a thin curry soup much like that you often get in a bowl of curry udon (which, coincidentally, was invented just around the corner at Sanchôtei). 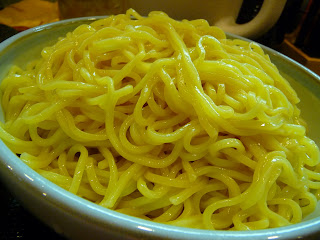 The visual impact of the noodles bulging over the bowl was intense, but rather than fill the whole bowl, they sat draining on a slatted wooden zaru board. In the afternoon, Shô offers any size of tsukemen for the same price, ranging as high as over half a kilo. I think I ordered the second-largest from the top. 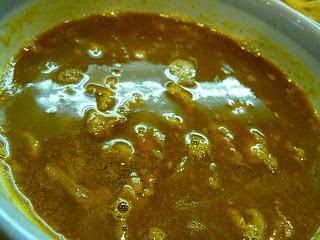 The curry was thinner than I make at home, but that's something of a necessity if you actually want to get the noodles into it, out of it, and into your mouth with any facility. Sometimes if you ask the cook to leave the meat out of curry, he'll say it's too much trouble and urge you to order something else, so I figured I'd just pick it out myself. Shô's curry was jam-packed with chopped up pork, which took a few minutes to remove before I really started going to town. 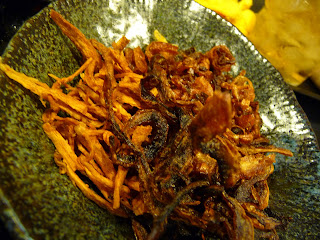 But what really made Shô's tsukemen stand out was the third small dish on the tray, a small plate holding two different kinds of fried shallot onions. I dumped them into the curry and got down to chowing. 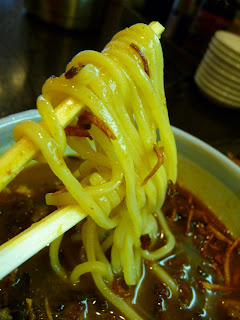 The shallots gave the curry a richer, more complex taste, almost like a kind of French onion soup. At the beginning, they give a nice crunch to couple with the thick chewy noodles, and as they get soggy, they cling to the noodles and let their mild taste out into the rest of the broth. Like most Japanese curries, Shô's dipping broth is more sweet than spicy, but after a few minutes of eating, I did notice a nice buzzing on my lips; while nothing compared to an Indian curry, the soup was spicy enough that Tokyoites of weaker palettes might take issue. No other toppings, but the curry was rich enough not to need them.

The presence of curry turns any dish into comfort food, and Shô's bowl was satiating. I took advantage of the hot pot of extra broth on the counter to thin out the curry and drink the soup down to the dregs. They did the curry tsukemen well enough that I'd be willing to give their standard ramen a shot. Good stuff - Shô gets the thumbs up.
Posted by Nate at 6:02 PM