Like a good graduate student, I spent most of the day in the library doing research. After a full day poring through thick tomes on Japanese publishing history, I was ready for some ramen. Since I had been the dutiful Waseda student, I figured I should end the day with some a bowl of ramen at a classic Waseda institution - Inaho. Located right in the middle of the block of scruffy old school cafeterias on the road leading to the main gate, Inaho has been dishing out noodles for a full 50 years. The name refers to a mature ear of rice, which is presumably what grows from the "early rice fields" from which Waseda gleans its name. 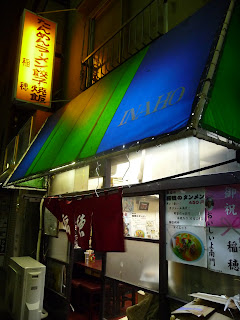 I could make out a few sets of legs in the light beneath the frosted glass door, so I figured there were customers, but when the sliding door clattered open, no one inside seemed to be eating. At the back table, the cook and his wife sat chatting with a friend, while another old timer sat in the front sipping a beer and staring off into space. I was greeted with moderate surprise, but a big smile, and sat down on one of the squat chairs and ordered a bowl and a beer. The old man slowly pulled himself from his chair and puttered over to the wok, where he got down to cooking. 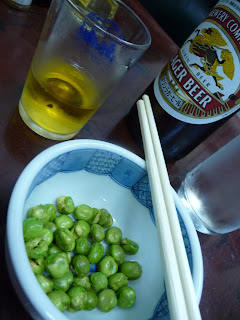 One of the old ladies brought me a nice cold bottle of Kirin and the other produced a small dish of fried peas to munch on while waiting for my order to come up. While sipping, I drank in the surroundings; Inaho is ollllld school. 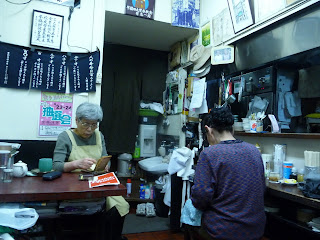 The place probably looks about the same as it did when it opened back in 1959, though it's hard to tell what's new and what's old amidst the yellowing clutter. Most available wall space is filled with faded photos of shrine festivals, graduations, and outings past, as well as all manner of Waseda-related knick-knacks. Though the old ladies reminded me more of the waitresses at Ogikubo's Harukiya Honten , the shop felt a bit like Ganso Ichijôryû Ganko in that it felt like an extension of someone's home, with shoes, keys, and the like laying around.

While I sat and waited for my order to come up, the old couple running the place and their friend sat gabbing about which shops in town serve the best sembei (rice crackers) as the phone rang off the hook with friends calling to RSVP for what sounded like an upcoming karaoke party. ("Seven o'clock next Friday. No, no SEVEN. SEVEN O'CLOCK. on FRIDAY. Can you hear me? OK, see you then! What? No, NEXT Friday"). I alternated between sipping my beer, chatting with them about school, and trying to wrap my head around the sensation that I had been transported to some corner of the countryside in 1972. Presumably the prices seem to have been subjected to the same time slip, since a bowl still clocks in at only 450 yen! 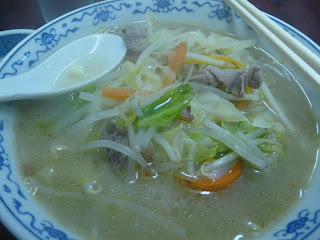 I was about to order a bowl of simple shôyû (soy sauce) ramen, but just in time noticed the numerous newspaper clippings tacked to the wall, all of which sung the praises of the tanmen. Tanmen is a japanese pronunciation of the Chinese tang mian (soup noodles), though I'm guessing that the dish has about as much to do with Chinese-style Chinese food as Lemon Chicken does. Tanmen consists of firm, white noodles in a thickish and mild shio (salt) flavored broth, topped with generous helpings of all manner of stirfried vegetables. Apparently its a Kanto (Eastern Japan) staple food, the kind of thing mom might whip up to please the kids at home. 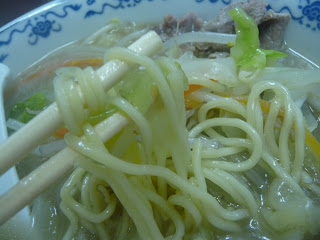 When the bowl arrived, it was huge, laden with bean sprouts, cabbage, leeks, sliced carrots, and white onions. The soup was a milky white, probably based in a chicken stock, though there was definitely more going on. There were a couple small chunks of lamb on top, and the soup tasted like some lamb might have gone into the broth, at least based on my limited exposure to lamb soup while travelling in Northwest China. The noodles themselves were long and densely packed, and there were a lot of them, making it difficult to extract the al dente strands from the tangled mass at the bottom of the cloudy bowl. This is not a bad thing by any means. I can't say I'm the type who regularly gets all my vegetables (what with eating so many bowls of ramen), so it was nice to get some veggies besides bamboo shoots and onions. The package was simple yet complex, and extremely satisfying, like any good old school bowl. 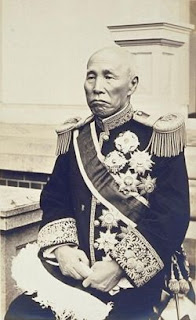 One of the most interesting things on the cluttered walls of Inaho is a banner displaying Waseda founder Okuma Shigenobu's "125 years of life" theory; Okuma, one of the bureaucrat oligarchs of Meiji era Japan, wrote that by properly taking care of oneself and one's health, one can live to be 125 years old. It looks like the crew at Inaho are well on their way to living out that maxim, and here's hoping that the shop makes it another 75. This is the one of the truest bowls of Waseda ramen.
Posted by Nate at 6:30 PM