Continuing my attempt to conquer the shops of the Tsurumaki-chô area near the university gate, I decided to hit up one of the newer places on the block, Uoranzaka. The location used to be occupied by a branch of popular Sichuanese chain restaurant Chinmaya, but in February Uoranzaka moved in. They call it Hokkaidô ramen, but I'm pretty sure it's an outlet of a Tokyo-based chain with about a half dozen shops around the metropolis. Even if the pedigree isn't from the northern island, the taste certainly is, as Uoranzaka dishes out bowls of thick and hearty Sapporo-style miso tonkotsu ramen. 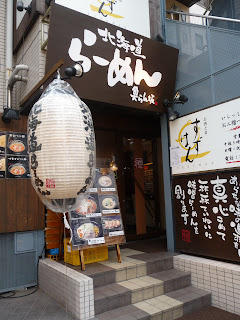 Uoranzaka is just around the corner from the Waseda subway station, across the street from the 350-year old liquor store Kokuraya. Piping hot porky miso might be more appropriate for snowy climes than for the t-shirt weather we've been having recently, but what was I going to do, not eat ramen? 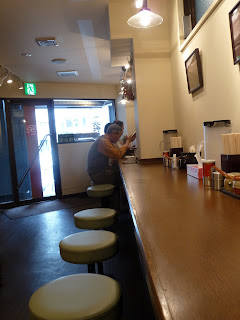 Inside, the shop is spacious, with a few different counter areas and cream and wood surfaces accented with old black and white photos of various famous locales around Hokkaidô. Even though there was plenty of room, the seats were inexplicably small and close together, and I felt a bit too close to my fellow slurpers for comfort. I was surprised that most of the clientele were not Waseda students but local office workers on lunch break. Maybe the place is too new to have registered on the student lunch circuit? 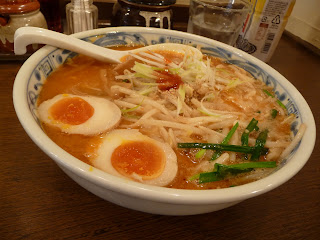 I went with the "orochon" ramen. Orochon ramen generally seems to refer to the spiciest option on the menu, perhaps as a nod to the toughness of the Siberian Oroqen tribe for which it is ostensibly named. I've got a full rundown on the phenomenon from my last orochon bowl at Fujiyama Seimen. I got a free upgrade to ômori (large size), and Uoranzaka definitely delivers on volume. In addition to a larger and fuller than average bowl, the orochon ramen is packed with all kinds of veggies - bean sprouts, nira (Chinese chives), fat menma (pickled bamboo shoots) and thin strips of onion. This is in addition to a healthy dusting of ground sesame and a dab of spicy paste. 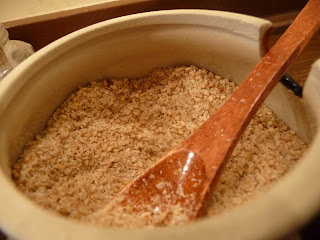 The sesame is one of the three "kodawari" of Uoranzaka. Kodawari is a bit tough to translate, but it refers to things that one takes great care about selecting; lots of restaurants use it in reference to the pride they take in selecting the best quality ingredients. Uoranzaka's kodawari, splashed up on one wall of the shop, are their sesame, their water, and their collagen. Collagen? Somehow the gelatinous substance found inside pigs' feet and joints has come to be marketed as a good-for-you food. I guess it's claimed that it gives you softer skin? I'm guessing it's tough to find a good way to convince slim fashionable young girls to eat pork lard. Only in Japan could eating pure pig grease be considered GOOD for your skin. 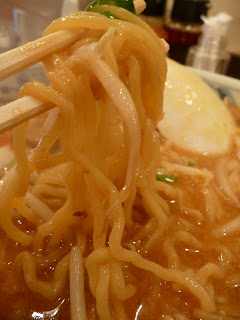 There'll be more on the collagen later. When this fully loaded bowl appeared in front of me, I got happy. So much food! So many vegetables! So rich and delicious looking! But could it be as good as miso ramen king Junren? The short answer is no, but Uoranzaka still serves up a mean bowl. The tonkotsu (pork marrow) soup is rich and flavorful, and great care has certainly gone into the selection of the miso, giving a cloudy, dark broth tinged orange from the "orochon" spices. A tiny dab of garlic brings it all together. The noodles are orthodox curly noodles, fresh and dark yellow, though I'm not sure if the color is due to the high alkaline content of the kansui water or eggs mixed with the flour. If you asked me, in my pre-ramen freak days, what ramen noodles looked and tasted like, I'd point to noodles like these. 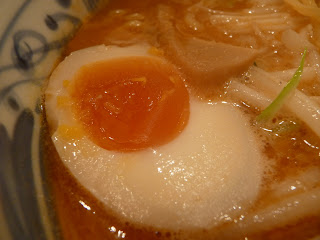 My soft boiled egg was fat and gooey, and the bamboo shoots were way, way above average. Bad menma can have a kind of tinny taste, or no taste at all, but these were bursting with woodsy flavor. Every time I grabbed a hunk of noodles I pulled up a few slivers of one vegetable or another. 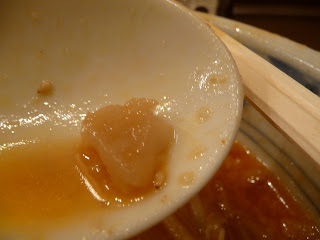 But now it's time for my beefs. For being the shop's "spicy" ramen, Uoranzaka's orochon is seriously lacking in heat. Sure there's a jar of tôbanjan (Chinese-style pepper paste) on the counter, but that can't substitute for a solidly spicy soup. But hey, it's not a big deal - some shops' spicy miso bowls end up with the chili overwhelming the taste of the miso, so I can understand erring on the side of caution. But what I couldn't get down with was the collagen. There was craaaaaazy amounts of suspended fat in the soup. Easily the most fat of any bowl I've had outside of Jirô. Suspended fat usually comes in small dots that float around the surface of the soup, but Uoranzaka's bowl had thick, solid chunks of pig fat that would be big enough to pick up with your chopsticks and hurl at an unsuspecting diner. Which to be honest, I find a little gross. By the end of the bowl, it got too be too much, and I was having to dip my spoon carefully so as to not pick up too much of the white stuff. Naturally, the kid sitting next to me drank his soup down to the last drop. And looked like he weighed 110 pounds. Fucker.

I thought about giving Uoranzaka the "highly recommended" nod for the rich soup and great toppings, but the fat got to be too much for me in the end. And then there's the little fat of what it did to my insides a few hours later, of which I'll spare the details. Still, if you can handle a hearty soup and dig Sapporo-style ramen, Uoranzaka is definitely worth a whirl. I bet you can ask them to go easy on the fat when you put in your order.
Posted by Nate at 6:58 AM

Nice blog! I love your casual writing style. I can't wait to read the rest of your posts once I'm done with my trip. I'm back in Tokyo on the 27th then leaving back to LA on the 29th. Shoot me an email. Maybe we can meet up on the 27th or 28th. Lates!

Glad you like it! Happy travels - I'll be eagerly awaiting each of your daily posts. I'll drop you a line and see if we can find time to grab some noodles in Tokyo.