There's been a fair amount of goings on in the 'Baba ramen scene of late, so I thought I'd do a quick rundown between bowls.

There have been increasing numbers of shuttered shops around town in recent weeks - no telling if its the global crisis in capitalism or just business as usual. 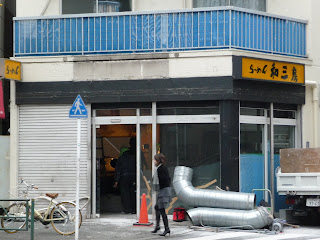 The branch of Kazusanbô just east of Meiji-dôri is no longer. A couple weeks ago I passed by to find a construction team inside tearing out the counter. I only went to Kazusanbô once, and was pleasantly surprised by a tasty but greasy tonkotsu shôyû (soy sauce and pork marrow soup). To the best of my knowledge, the Kazusanbô east of Waseda near the Bentenchô intersection is still open. 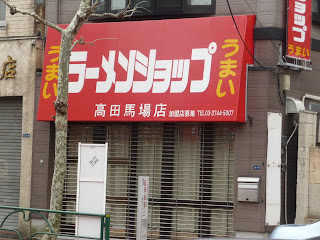 In another major blow to the state of tonkotsu shôyû options in the neighborhood, the eponymously named Ramen Shop has shuttered its doors. A note left behind thanked the good people of Baba for their patronage and encouraged them to visit the new location; unfortunately, that location is in Shizuoka, two prefectures away. I really liked this place, and I'm sorry to see it go. Other branches of Ramen Shop located out in Saitama are presumably still in business. 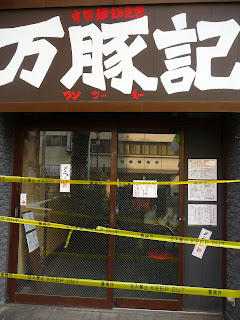 In more sad news, a fire gutted the local branch of tantanmen chain and fried rice purveyor Wantsûchi. About two months later, the police tape is still up, and there are no signs of life or hints of an impending reopening. Wantsûchi was one of my favorite places to go for a quick meal, and served a mean tantanmen with legit Sichuan spices, so I'm really hoping they get the pots fired up again soon.

There's no law of absolutes in 'Baba ramen, no zero sum game, but it does seem that every time a shop closes a new one pops up in its stead. 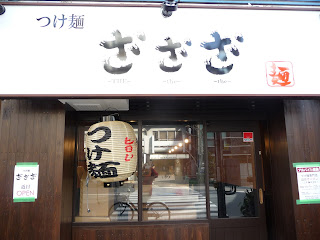 Just around the block from my place, Za Za Za, a new tsukemen (dipping noodle) restaurant, started slinging noodles on April 1st. The storefront used to house Saitama-ya, but that shop went kaput back in September. Za Za Za, festooned with flowers on opening day, advertises extremely spicy tsukemen in the style of shops like Takagi-ya. While I'm always excited to try a new place, I'd prefer a bowl of proper ramen rather than yet another tsukemen shop. 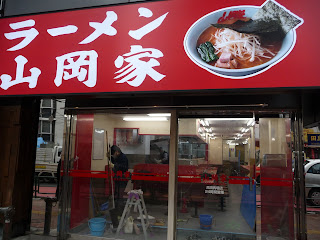 On the northwest corner of the Babakuchi intersection, just across the street from Ramen Shop and next door to the long-closed Fukushin, Yamaoka-ya is under construction and preparing to open in April. It looks like Yamaoka-ya will be dishing up classic Yokohama-style "ie-kei" ramen featuring thick pork-chicken broth and spinach, similar to that served at Shichifuku-ya down the block. The sign says 24 hours, so drinkers who miss the last train now have one more option to nip hangovers in the bud.