I was leaving Tokyo for about a week, so before taking off, I was in the mood to have a hell of solid bowl of straight up Kyushu-style tonkotsu ramen. I had to run some quick errands in Shinjuku, so I figured I'd swing back through Kabukicho, Tokyo's biggest red light district and home to more tonkotsu ramen per square meter than anywhere else east of Fukuoka. Once you head into the backstreets, it seems like you can't spit without hitting a pork bone ramen purveyor. Kabukicho is a neighborhood of dudes, and Hakata ramen is a food of dudes. I had already had one brutally awesome bowl at Shinjuku Hitotsubo, so I had high hopes for the next one. 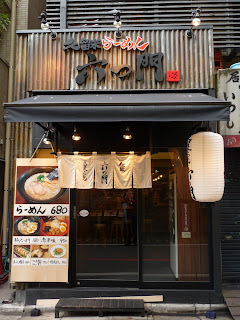 I had planned on hitting up the Shinjuku outlet of one of the classic Tokyo tonkotsu joints, Nandenkanden, but it seems like that branch bit the dust a year or so back. Undeterred, I headed down the block, ignoring Nigerian hustlers' invitations for matinee sex shows and searching for a suitable replacement until I stumbled upon Kurume Ramen Mutsumon. To get there from Yasukuni-dôri, go north on the street leading to the now-defunct Koma theater and then make a right down the second alley. 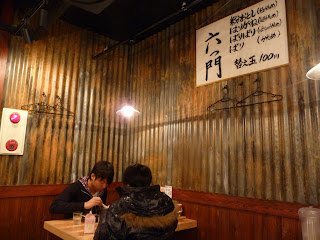 I had eaten a couple of bowls of Kurume-style ramen before, one at Kinmaru, and one at Tatsunoya - both had been among the best bowls yet. Something about the sineage at Mutsumon felt familiar, and I wonder if it might be some kind of sister shop to Kinmaru - similar font and photos, identical garlic press, and a menu that offers the whole gamut of ramen choices in addition to the classic old school pork marrow and soy sauce broth that Kurume is known for. I dug Mutsumon's interior of polished wood and corrugated metal walls - maybe at some point the Kurume city shopping arcade for which the shop is named had a tin roof? 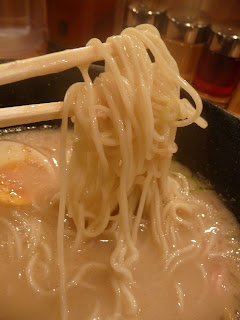 Like at Kinmaru, you can choose between mulitple levels of noodle firmnosity, beginning with yawame (soft), futsû (normal), and going through katame (hard), bari kata (very hard), bari bari (very very hard), harigane (hard as a wire), and finally kona otoshi (with the flour knocked off). Al dente to the max is the canonical way to eat Hakata and Kurume style ramen noodles, but the degree to which customizability on that tip is available is impressive. I started off with bari bari, which was just the right amount of chewy. 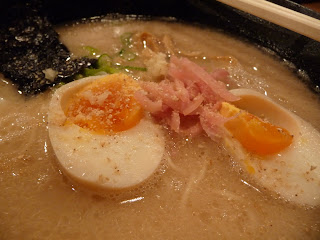 As for the bowl itself, Mutsumon brings it really fully loaded with all the trappings - thin slices of green onions and pickled bamboo, a tiny sheet of nori seaweed, and slivers of beni shôga (red pickled ginger) and a sesame grinder tableside. 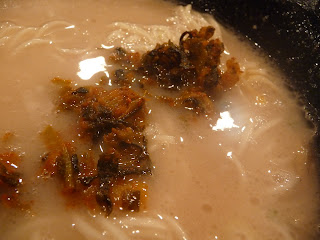 And let's not forget the spicy pickled mustard greends (takana)... 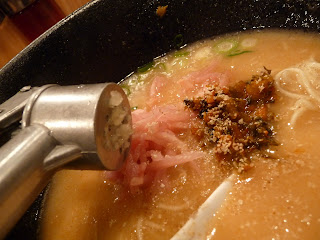 ...or the fresh garlic press. Trick that bowl out! Mutsumon's broth is of course a hearty pure tonkotsu (pork marrow), with just a splash of shôyû (soy sauce) flavor essence. Maybe not quite as over the top rich as Tatsunoya's soup, but very creamy and more "mild" than some of the more rustic / smelly broths plied by shops specializing in Kurume's neighboring areas of Kumamoto and Hakata. Sesame, garlic, ginger, and liquid pig are a match made in heaven. The only weak link was the egg, which wasn't really steeped in shôyû and was cooked a bit harder than I like. 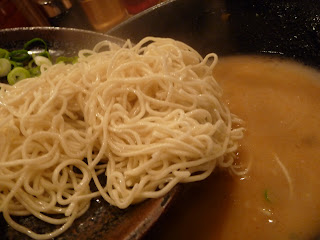 One helping is never enough at Kurume and Hakata-style joints, so I plunked 100 yen down on the counter and got a noodle refill (kaedama), this time screwing up the courage to shoot for the top and get the "kona otoshi" noodles that are only dipped in boiling water for about 2-3 seconds. They definitely taste almost raw, but since the noodles are so fresh and pliant, they're still very edible and not crunchy. 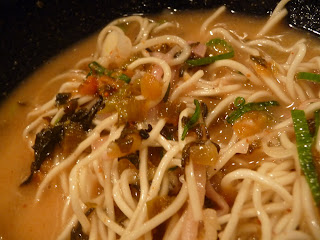 Against my better judgement, I decided to throw down for an unprecedented second refill. My philosophy when it comes to Hakata ramen is that it should look like the inside of a dumpster by the end of the day, with tons of remaining shreds of takana greens, onions, ginger, and all the rest all mixed together at the bottom of the bowl. 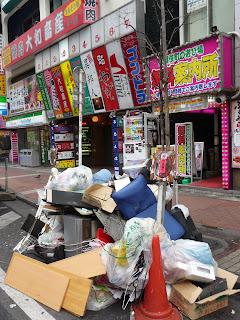 A garbage plate is an appropriate thing for a bowl to look like, since all the previous night's trash in Kabukicho was still piled up on the street when I walked out. Mutsumon's ramen might not have been the total revelation that Kinmaru's or Tatsunoya's was, but I think that's more of a result of knowing what to expect at Kurume ramen shop - if I had been to Mutsumon before I went to Kinmaru, I think I would have been more blown away. Mutsumon still whips the pants off the vast majority of other ramen shops, at least if you love Kyushu-style ramen as much as I do. Hit it up!
Posted by Nate at 6:57 PM

i love anything with pork bones and/or pork marrow. i do believe that's the secret to good brothage.

definitely. i'm the guy who doesn't eat pork, but slurps down liquid marrow like there's no tomorrow.