I've eaten at a pretty good number of the ramen shops of the Takadanobaba / Waseda area, if I do say so myself. I'd gamble there's about 80 or so shops in all, and I've probably topped 50 at this point. I've definitely still got a long way to go, but I feel like I can see the remaining task in front of me, and it feels manageable. Geographically speaking, the zone I've covered the least is probably the Tsurumaki-chô area in the back streets east of the university near the Waseda subway station. I have to pedal down (and then back up) a decent-sized hill to get there, so I feel less inclined to head in that direction when I set out. But from here on out, I'm making an active effort to cover that territory...beginning with Shichifuku-ya. 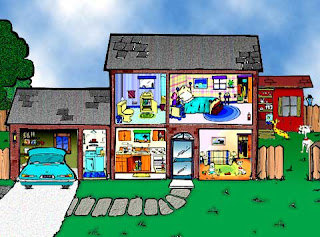 To the well-informed noodler, the kind of ramen that Shichifuku-ya serves can be hermeneutically deduced through the presence of the final kanji in its name - 家, read "ya" or "ie." This character is a general indication, but not a sure-fire give-away that the shop in question serves what is colloquially known as 家系 (ie-kei)"house-style" ramen. At first, I was under the mistaken impression that "house-style" meant "homestyle" ramen, perhaps a simple shôyû broth reproduceable in the average kitchen. However, the "house" of "ie-kei" refers to a very particular house, in particular the "House of Yoshimura" - Yoshimura-ya 吉村家, an immensely popular and influential ramen shop founded in Yokohama in 1974. 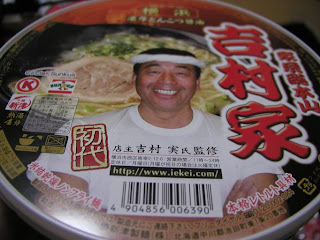 Unlike most ramen shops that carefully guard their secret recipes, the owners of Yoshimura-ya (who are in fact named Yoshimura), allowed their recipe to spread. Spread it did, and now there are hundreds of shops nationwide serving similar bowls of pork bone and chicken soup in the style of Yoshimura-ya. As a kind of homage, these shops almost always attach the character 家 (house) to the end of their names, and thus the term "ie-kei," "house-style" ramen was born. Among those, there are direct and indirect lineages, of which I believe Shichifuku-ya is the latter. 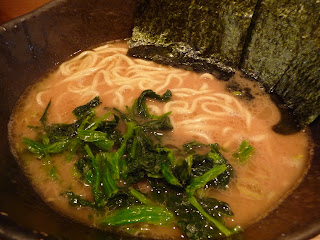 This, however, was all information I gleaned after my visit to Shichifuku-ya (House of Seven Good Fortunes). This was my first experience with "ie-kei" ramen, and thus I had no standard of comparison, and was not aware of how ritualized a bowl I was in for. When I ordered the basic ramen, I was served up a bowl topped with spinach, menma bamboo shoots and an unusual three sheets of nori seaweed. I took this variation as inventiveness and generosity, but little did I know that spinach and exactly three sheets of nori are standard operating procedure at ie-kei shops. Not knowing about the ie-kei standard chicken/pork broth, I mistook the soup to be a modified, light tonkotsu shôyû. 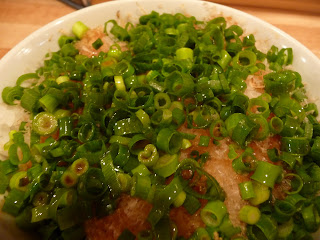 But before I tucked into the ramen itself, I got served up my side dish of negi gohan, rice topped with crisped bonito shavings and a forest of tiny onions. It wasn't bad, but the tare (essence) used to give it flavor had a strange tart, almost tangy taste that I didn't care for. So, if you go to Shichifuku-ya, pass on the negi gohan... 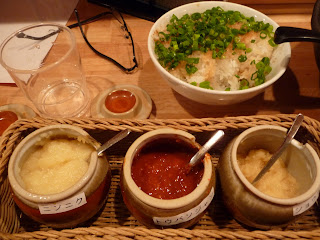 ...but don't forget to properly trick out your ramen before you get down to chowing down. On the counter are a few small ceramic containers holding minced garlic, ginger, and tôbanjan Chinese-style hot pepper paste, as well as a fresh sesame grinder. My first sip of the soup was less than satisfactory, but in retrospect, I think I just still had the tangy onion taste in my mouth from the negi gohan. 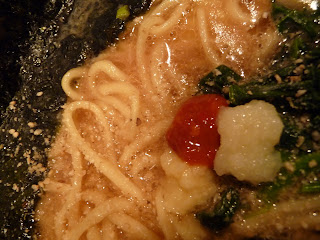 A few small dollops of the garlic, ginger, and pepper, and the whole bowl came together. Since the soup uses a substantial amount of chicken and not pure pork bone, the broth is far less oily and greasy than the average tonkotsu shôyû (pork marrow soy sauce) bowl. This means its also a bit less rich in flavor, but that's where the ginger and garlic come in. A bit of blending makes for a much more complex bowl, kind of like how a good bowl of Hakata ramen functions. I had wrinkled my nose and committed myself to a mediocre bowl after the first bite, but after the additions, the taste kept growing and growing - Shichifuku-ya's is a bowl that gets better with each bite. 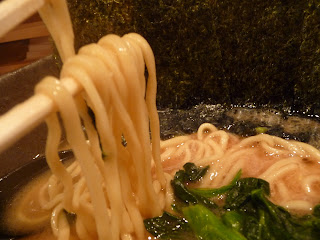 As for the noodles, they are apparently in classic ie-kei style as well, being a bit thicker, wider, and flatter than average. Fat noodles always work for me, and no exception here. In the topping department, the menma (bamboo shoots) were better than average, extra nori was a nice touch, and I'm always a sucker for spinach added to any dish, so checks across the board. 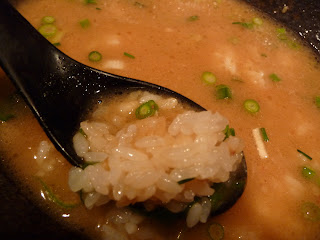 By the end, I did something I hadn't done in a long time - dump the rest of my rice into the remaining soup to eat "ramen rice." I used to do it all the time in Kyoto, but have since phased it out for health-consciousness reasons. In any case, take it as a good sign that I kept spooning the rice and broth down my gullet until it was nearly gone. 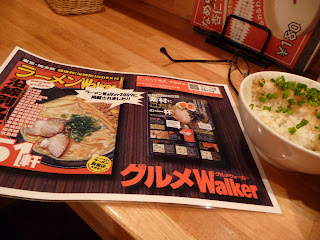 No small wonder then, that Shichifuku-ya got a full-page write up in the 2009 Ramen Walker magazine, which they display proudly at each seat. Shichifuku-ya also brought to my attention the ie-kei a whole style of ramen I didn't know existed, and for that, they get mad props.
Posted by Nate at 8:25 AM

from the picture looks good to eat, so hungry to see it hhe