I just got back from a week in New York, where I spent a not-insignificant chunk of time eating not-insignificant amounts of Italian food. Now that I'm back in Tokyo, I figured I should re-adjust my mouth to Japanese food gradually, so I headed off to Menya RYOMA for their famous tomato cheese ramen. RYOMA was one of the first places I ate after arriving at Waseda, and I had a bowl good enouh to make me reconsider my whole opinion on the relative merit of shio (salt) ramen. But the dish everyone buzzes about is their "Sio Tomato Cheese Ramen," and I couldn't go on with my quest until I had satiated my desire to try this fusion bowl out. 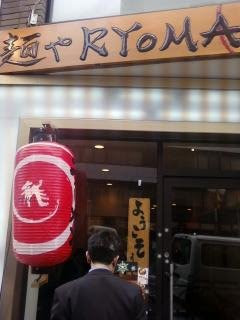 My mouth was already watering when I walked into the spacious, hip, restaurant-style dining room. RYOMA is nearly all tables, which, while nice, makes it a bit hard to get the waiter's attention. I knew what I wanted but still took a gander through the multipage glossy menu - in addition to the Tomato Cheese, RYOMA serves classic shio ramen, shio ramen with katsuo fish stock, mild tantanmen, and a series of teppanyaki iron hot plates featuring griddled meat and comically oversized gyoza. 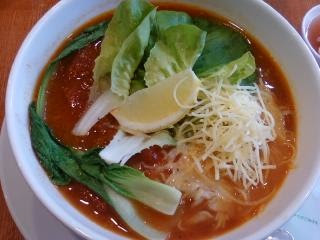 It just takes one glance to realize what a unique bowl RYOMA's ramen is. Tomato paste? Leafy green vegetables? A slice of fucking lemon? What in the dogg, sir. But it works, I swear to god it works. RYOMA's tomato ramen is based in a simple and thin salt broth with a hefty amount of tomato sauce tossed in. The tomato sauce isn't the gloopy canned stuff, but rather is replete with fresh hunks of crushed and stewed tomatoes and a nice blend of mild spices. After a squeeze of citrus, the first bite tasted like it had as much in common with a tomato-based spicy Thai soup as Italian pasta. 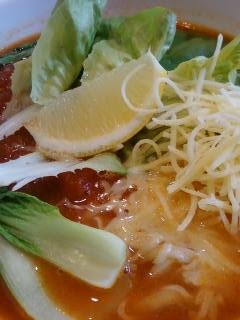 That said, Italian was definitely the overall impression, with just enough of a "ramen soup taste" to balance it out and remind you that you are eating ramen, and not just spaghetti served in a fancy bowl. What really gave it extra punch was the mozzarella cheese - a far cry from processed cheese, this stuff had a rich and sweet yet slightly pungent flavor, rather than the bland but fatty taste of some mozzarella. Balance it out with some palette-cleansing greens, and you have yourself an eminently slurpable bowl. The noodles were thickish, whitish, and flattish, not surprisingly not too different from Italian pasta. 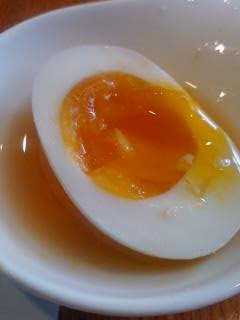 I ordered a side of an umetama "plum egg." While most ramen shops's ajitsuke tamago (flavored eggs) are just soaked in a soy sauce broth, RYOMA lightly poaches theirs in a thin Japanese sour plum vinegar, making the yolk sweet, sour, and runny. As a final touch, every bowl of ramen comes with a free mini-sized bowl of rice. So, at my server's suggestion, I waited until I finished my noodles... 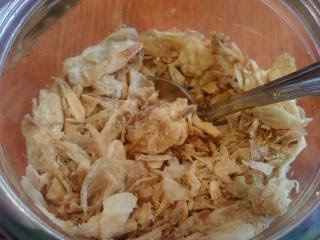 ...sprinkled in some of the tableside fried shallots... 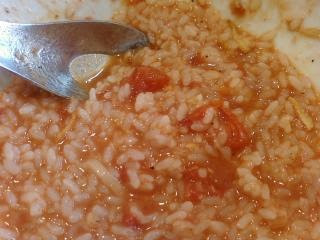 ...and mixed myself up a nice risotto to finish off the meal. 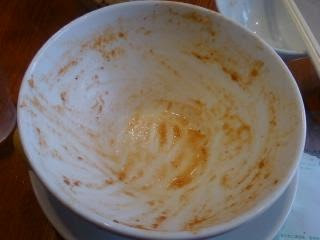 I patted my belly twice, paid my bill, snagged a copy of the new "Ramen Bank" magazine, and left behind my emptiest bowl in quite some time. RYOMA's Sio Tomato Cheese is ramen as a full, balanced (uhh, sorta) meal, and hit the fucking spot. Another highly recommended bowl.
Posted by Nate at 11:23 AM

i'm gonna check this out for sure

DreamHost is ultimately one of the best web-hosting provider for any hosting services you need.

website link dolabuy have a peek at these guys https://www.dolabuy.co find out this here Valentino Dolabuy