Last week I was heading home after my buddy's house party, and, having filled up primarily on potato salad, potato chips, mashed potatoes and potato croquettes, I was in the mood for...not potatoes. Despite having already eaten way too much for the day, I had a hole in my stomach that could only be filled by...do I even need to say? While reading the following review, I recommend the following as background music - a great clip from "Tapeheads," which was on at the party, and which stands the test of time admirably.

I got off the train at Baba station and it was pissing down rain, so I didn't want to go far. 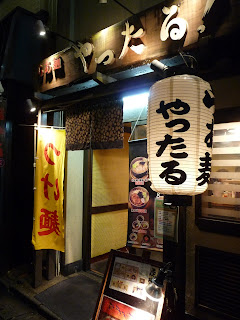 Drawn in by the white lantern, I ducked into one of the few remaining shops on the backstreets northeast of Baba station - Ramen Yattaru. 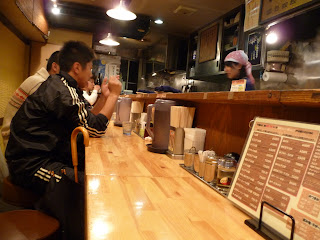 "Yattaru" might be roughly translated as "got it goin' on," and there was a lively atmosphere in the shop, with a young man and a young woman cheerfully working behind the counter and cracking jokes with the mostly young customers and each other. Yattaru takes pride in both their light tonkotsu shôyû (pork bone and soy sauce) ramen as well as their abura soba (soupless noodles) - I hadn't done abura soba since Bubka a couple months back, so I decided to go with the latter. 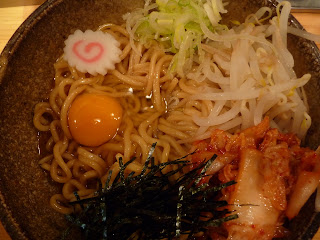 One of the nice things about Yattaru is the wide variety of toppings on offer - in addition to standards like extra sheets of nori seaweed, soft-boiled eggs, and extra onions, they've got bean sprouts, raw egg, mentaiko (cod roe), kimchi (!), and regular as well as mentaiko-spiced mayonaise (!!!). I say grab it while you got it goin' on, so I topped off my bowl with some kimchi and a raw egg. 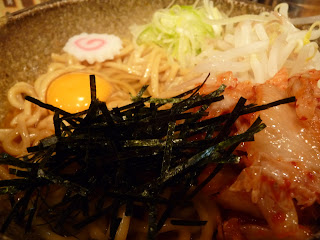 When I went to Bubka, I compared abura soba to a something like Japanese nachos - a big pile of carbs with all colors of savory toppings laid out on top. Way back in the day, a friend of a friend used to always turn her Taco Bell nachos into what she called "chaos nachos," mixing all the ingredients together into a salty, delicious mess. That's the way to do it with abura soba too - you start with something like the picture above, with your naruto fishcake, shredded nori, egg, onions, and sprouts, laid out all pretty... 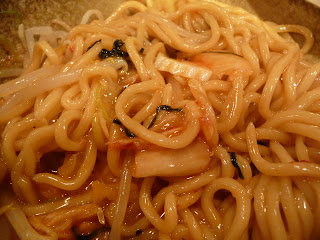 ...and then you turn it into a heaving mass of chaos like this. And then you get down to business slurping. Chaos business. Unfortunately, Yattaru's abura soba didn't quite make it to the full-on we-mean-business level. Everything was in order, but it just didn't have that strong of a taste. It was oily enough, and I left with the classic tonkotsu shôyû film on the inside of my mouth, but the package was missing some punch. It was tasty enough, filling (too filling) comfort food, but there was nothing to really make these noodles stand out. The kimchi was a bit on the bland side, and I slurped away a bit disappointed, especially after my last abura soba bowl at Bubka had left me posting up images of giant flaming hands flashing the devil horns. 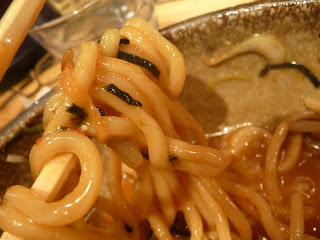 I did catch a couple of glances down the counter and the plain ramen actually looked and smelled real nice. For now, I'm withholding a recommendation for Yattaru, but I may get back around to going back and trying their basic ramen, which I'm still holding out hope for. For my Japanese chaos nachos, I'm sticking with Bubka.
Posted by Nate at 7:38 AM