Last week, spring finally hit Tokyo in a big way. It's since left again and the cold has rolled back in, but there were a few brief days of beautiful sunny t-shirt weather. I knew I had to take full advantage of the weather while I could, so I hopped on my bike to take a long ride. I headed north then pedaled along the banks of the Arakawa river, working my way clear to the other side of town before working my way back through central Tokyo. 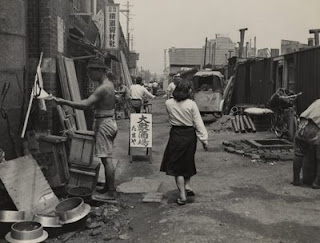 Northeast Tokyo is a very different world from the glitz and high-rises of areas like Shibuya and Shinjuku. If you look closely at a map, Tokyo is a very riverine city, especially on the east side of town, with the Arakawa, Sumidagawa, Edogawa, and other smaller rivers winding their way between lowlying tidal flats. Perhaps the most salient traditional geographic distinction in Tokyo is between the higher land west of the imperial palace (yamanote), and the "low city" (shitamachi) in the north and east. The lowlands by the rivers have been and generally still are among the poorer parts of town, and have been the first to burn the many times Tokyo has gone up in flames in the last 400 or so years. 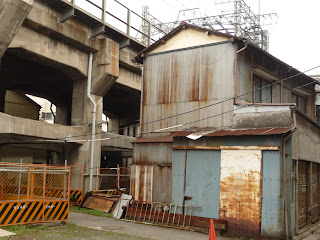 On my ride, I passed factories, waste processing plants, corrugated shacks, homeless tent cities, sidewalks layered in garbage, and other such sights not generally associated with the squeaky clean image that Tokyo tries to project. The reality is that Tokyo (and Japan at large) is in fact a class society, and those classes are becoming increasingly stratified in the present economic climate. As I've talked about in past posts, ramen began as street food for the people and has made a long climb to the top. We now live in an age of "ramen dining," boutique shops, 3,000 yen bowls, and other such extravagancies, but sometimes you need a reality check to remind you where ramen really came from and what it's all about. 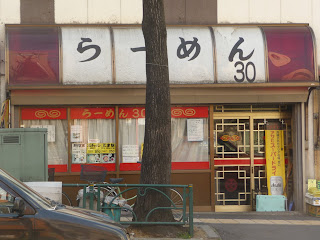 So it was perhaps fitting that I ended up at Ramen 30 for dinner. Ramen 30 is located on the west side of Meiji-dôri, just south of Waseda-dôri a bit past Menya Sou. The contrast between the two couldn't be more distinct - Sou prides itself on luxury ingredients in a high-design environment; Ramen 30 is a spitting image of a "classic" neighborhood ramen shop. 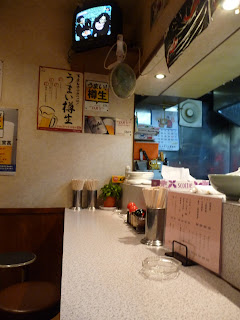 When I stepped inside, I found myself the only customer save for a middle aged man with a cap pulled down low over his brow, absorbed in his Playstation Portable and appearing to have been camped out drinking beer for a not insignificant period of time. The cook, having nothing to do, was leaning against a wall on one side of the shop, watching a variety show on a tiny TV perched on a bracket in one corner. 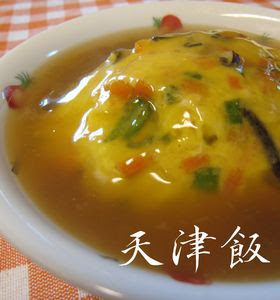 In addition to ramen, Ramen 30 functions as a kind of neighborhood-style Chinese restaurant, serving old-school Japanese-Chinese standards like "Tianjin-style" rice (mock crab omelette in brown sauce) or stir fried liver and onions, as well as a decent selection of more complicated Chinese dishes and beer snacks, conveniently scrawled on white paper and taped to most available surfaces. I got the vibe that the place serves as a kind of izakaya pub for a certain salaryman set. I can't remember if the ramen soup options ran the whole gamut, but this is the kind of place where you're best off ordering simple soups like shôyû (soy sauce) or shio (salt); after a moment of debate I got the latter.

Sitting there watching the middle-aged cook and his pock-marked, splotchy-faced (sorry, she was) Chinese wife bustle around to prepare the bowl for me, the only customer, I started to feel a little depressed. Are they making enough money to stay in business? How much longer would this place be around? The twin openings of Garasha and Kitarô right across the street must have caused significant gnashing of teeth for the couple running Ramen 30. Those are both high-concept, fashionable shops that people travel from across the city to eat at. I would be shocked to ever see an O.G. joint like Ramen 30 in a ramen magazine or on a TV program. 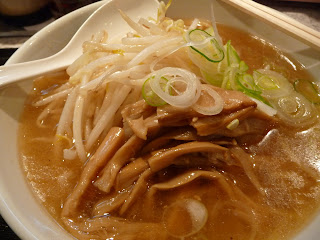 A few minutes later, the noodles came up. And you know what? They were really, really good. With each bite, my mood started getting better. Slightly wavy, yellow, medium thick noodles, light, orthodox, thin chicken broth soup, a mound of crunchy bamboo, a mound of bean sprouts, a mound of sliced onions, a couple sesame seeds, and nothing else. Totally normal in every way. But in a town like Takadanobaba, that somehow makes Ramen 30 special. Every other shop is trying so hard to put their own spin on the classic bowl, and there are less and less shops like Ramen 30 that come correct in canonical style. 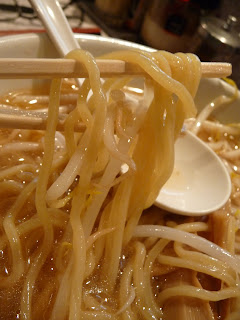 Every aspect of Ramen 30's bowl was completely standard and completely well-executed, and I realized that it had been a long time since I tasted ramen like this. These days I'm always digging some store doing something crazy, but Ramen 30 reminded me what the ramen I first came to love tasted like. It had been too long, and I sorely needed a reality check. And besides, at only 550 yen a bowl, it's one of the cheapest games in town. Another 130 yen gets you a mini fried rice on the side, which I regret not taking advantage of. And despite the lack of PR, Ramen 30 gets overwhelmingly positive reviews on the Supleks Ramen Database. Ramen 30 is ramen of the people, by the people, and for the people, and I hope it does not soon perish from this earth.
Posted by Nate at 1:18 AM