My cousin and his girlfriend were in town visiting Tokyo for the first time last week, and what was I going to do, let them go home without eating ramen? Not an option. We spent a rainy morning in Ueno Park, then went traipsing around the alleys of Ameya Yokocho, which is one of the parts of Tokyo that feels like, for lack of a better term, the rest of "Asia." Ueno is one of the main shopping areas in the northeastern corner of town and has always been an important destination for people living in the lower more riverine parts of eastern Tokyo (shitamachi, the "low city") as well as travelers and migrants arriving from the rural Northeast (Tôhoku), who come in through the Ueno station train terminus. Ameya Yokocho was one of the biggest black markets in the early postwar years during the occupation, and it still retains something of that atmosphere, with lots of raw goods being hawked, tiny drinking establishments under the train tracks, and so on. 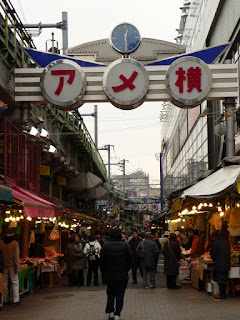 The Ameyoko alleyways are also a great place for a ramen shop, and its no surprise that the Menya Musashi local chain set up shop in this major tourist and shopping district. Each Menya Musashi shop has a different concept and style - I hadn't been too into the fish-heavy broth at the Takadanobaba outlet (Takatora), but the Ueno shop, Bukotsu (which means gruff, uncouth, or caveman-like - literally "warrior bones") was a whole new shop with a whole new menu. 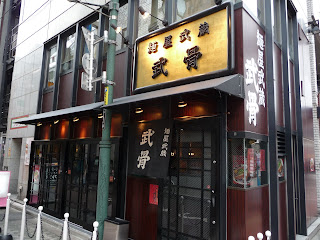 Musashi shops are definitely buzzed about and have strong followings, so lines can be sort of infamously long. Luckily, we had a late lunch, and only had to wait about five minutes, but testament to Bukotsu's popularity lied in the chained off designated lineup area that wrapped around the corner. Inside, Bukotsu was cozy, with a very wide and open square central kitchen area and seats on two sides of the square. The menu came in three options - White, Black, and Red. White is the basic, Black is tinged with squid ink, and Red is spicy. 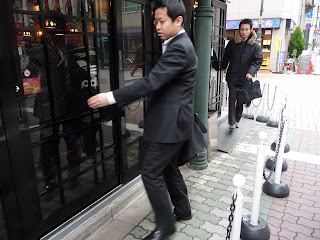 My cousin and I both opted for Black, while my cousins' GF got the old-school white. After a few minutes, we were shown to our seats, which involved leaving the restaurant, rounding the corner, and re-entering through the opposite side.
More than almost any other ramen shop I've been to, Bukotsu gives you a great view of the ramen making process, which is always a pleasure to watch. You get a front row seat to the action - giant vats being stirred with a comically oversized spoon, meat and veggies getting chopped, toppings being laid on. Unfortunately, none of my pics of the kitchen came out, since all the cooks were moving around with way too much velocity for my camera to capture. 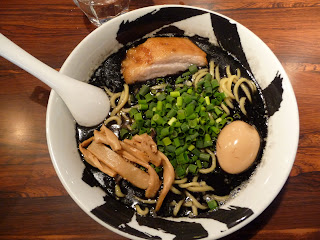 We were famooshed by the time the bowls arrived, having been tantalized by the rich porky smell wafting through the room. Bukotsu's bowls are bu-yootiful, and look great filled with thick black soup. There are tons of tasty green onions, nice thick slices of fresh menma (bamboo), and jesus christ are you fucking joking about that pork? 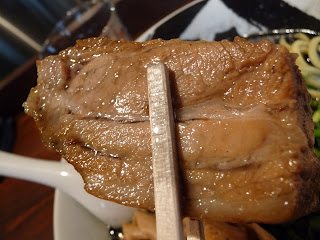 Obviously I can't speak to the pork's taste, but its size was truly imprsesive. As for the soup itself, the base is a thick creamy tonkotsu (pork marrow) soup, with just the slightest hint of fish stock mixed in. Unlike at most other "black ramen" shops, the color at Bukotsu comes not from burnt miso, but from squid ink. Despite its color, squid ink is surprisingly mild, having a salty taste that blends easily, rather than any kind of strong or pungent taste of its own. Accordingly, while Bukotsu's broth was certainly tasty and top-tier, it lacked that kind of extra something, that deep complexity of flavor that the burnt miso black ramen at Gogyô delivers in, um, spades. Very solid, very tasty, but a bit generic in that kind of contemporary high-end ramen way. 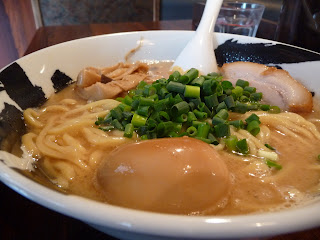 The "White" soup (more of a milky brown) was a bit milder, but maybe even a tad more complex - it had a bit stronger of a blended fish taste, which I'm not always a fan of, but it crossed the bar perfectly balanced. My cousin's GF was perhaps unprepared for the amount of noodles and pork delivered, and I slurped up (down?) the last of her bowl. 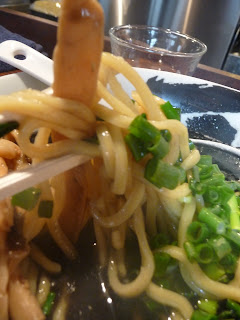 The noodles themselves were just a wee bit thicker than average, a wee bit flatter than average, and just curly enough to pick up the onions along the way. All in all, a very well executed, tasty, and satisfying bowl of ramen, but somehow lacking that extra something to make it a truly fantastic bowl. I still want to try Musashi Edokin, the Asakusa branch that serves up both curry tsukemen and a modified Hakata-style bowl, both of which I'd be interested to try in their Musashi reimaginings. 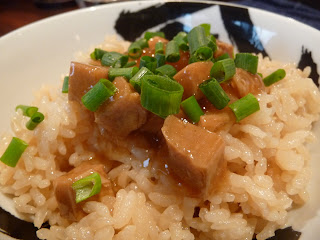 Oh yeah, there was also a pretty tasty-looking side of yakimeshi (fried rice) with a bit of diced pork in a sweetish sauce ladeled on top. 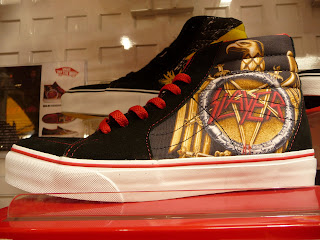 But the best part of the day was finding THESE SHOES!!
Posted by Nate at 6:34 AM