Conventional wisdom in the Tokyo ramen world is that "you can't talk about ramen in Takadanobaba without talking about Benten." So I guess it's time for me to talk about Benten and allow the legitimacy to rain down upon me. It's been said that Benten is to Waseda University as the original branch of Ramen Jirô is to Keio University, which is to say a beloved institution beholden to local students. I don't know exactly how old Benten is, but apparently it's the kind of place alumni always stop by when they're stomping the old haunts. 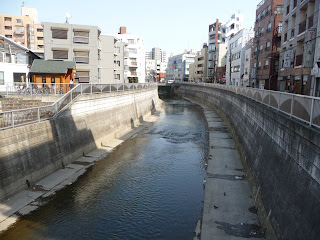 Benten is located off the main drag of "ramen street" Waseda-dôri, tucked away on an alley corner facing the concrete canal that passes for the Kandagawa river. 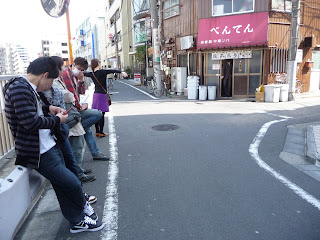 I rolled up a bit after 1 PM on a sunny afternoon and there was a line about 10 deep, which is apparently par for the course. Rather than wait by the door, the line formed along the riverside, as a mix of students and businessmen chatted and read manga while sitting perched on the guardrail. 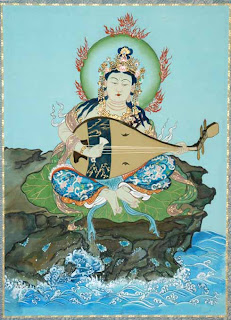 The beat up old awning says "noodles - fat, dense, tasty, and a lot of them," and the emphasis at Benten is definitely on the "a lot of them" part of the phrase. Although Benten is in the upper echelons of renowned tsukemen shops, that reputation lies largely on the sheer volume of noodles that they serve. Benten's namesake is the goddess Benzaiten, and it would probably take an act of divine intervention from her in order for the average mortal to be able to polish off the largest size of noodles, which clocks in at a whopping kilogram - 2.2 POUNDS of noodles. 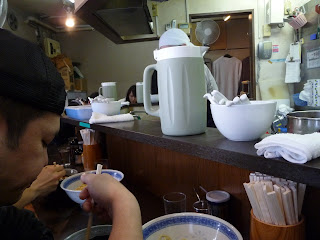 After about a ten minute wait, I slipped open the clattering glass door and took my seat. Benten is old school all the way, with ratty off-white walls, a cramped counter, and a huge whirring ventilation fan as the only musical accompaniment. It always makes me smile to sit down at a place like this amidst the sea of cleaned up high design shops. I decided to go with the "small", which is still a respectable 350 grams - the better part of a pound. For another 100 yen you can go up to 600 grams, but a small sign asks first timers not to even try ordering the large. I was somewhat surprised to find myself sitting next to that rare species - a fashionable single girl at a ramen shop; not so surprised when she sheepishly asked the cook to make her helping "extra small." 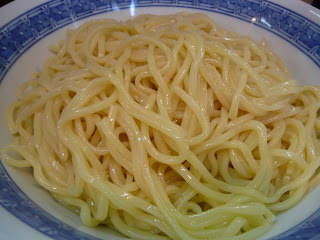 Benten serves ramen as well, but everyone I saw ordered the tsukemen. Rather than make each bowl to order, the hefty cooks make whole huge batches then dish out noodles to the whole room at once. The weights of each portion are approximate at best, since service essentially consists of a fat middle-aged man grabbing handfuls of noodles and filling a small salad bowl. The noodles are basically chewy and spaghetti-like, just a wee bit curlier than the similar ones at Taishôken across town. The important thing is that there's a fucking lot of them. Even for tsukemen they're served a bit on the lukewarm side, since the cook runs the lot of them under water before serving. 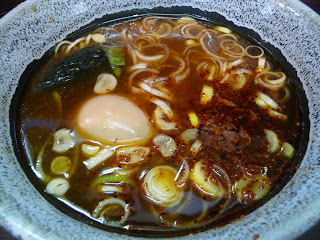 I ordered my cup of broth extra spicy with an egg, which I ended up regretting. Spicy just meant a dumping of cheap chili powder on top, and the egg was boiled a bit too hard and on the bland side. 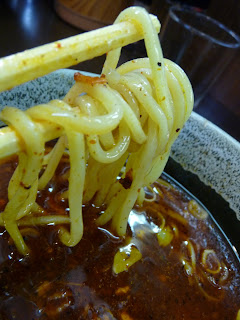 I had heard that Benten's broth was sweet, but it didn't seem as sweet as Taishôken's. In fact, every aspect of the broth was similar to Taishôken's, but a bit inferior in my opinion, being a bit fishier and lacking that perfect balance of sweet, spicy, and suppai (sour). If it wasn't for the huge portions, I'm not sure Benten would be so well loved. That said, the near bottomless bowl did make for an enjoyable eating experience - it felt good to be able grab huge hunks of chewy noodles and just fill the mouth over and over again. The only sound to be heard was the beating of the fan and the slurp as all conversation ceased so the mouth could be devoted to eating. Benten is definitely worth it once for the experience, but since I'm not such a big tsukemen fan to begin with, I'm not sure I'll be back. I would like to dare someone to eat the 2.2 pounder though...
Posted by Nate at 6:05 AM