I was running late and needed to stop and grab a bite before meeting my buddy in Shinjuku for some drinking and catching up, so I decided to keep it simple and get some tsukemen by the station. Takagi-ya has two outposts, one at the bottom of the hill right by the Waseda subway station, and one at the top of the hill in the small streets east of Takadanobaba and just north of Waseda-dôri, back in the warren of alleys where middle-aged Taiwanese guys hang out on the corner and ask you if you want a massage. Takagi-ya's logo is a little guy that I had always thought was an octopus, but turns out to be a modified Munchian screamer yelling "Hiiiiiii karai!" - "Whooooooa, spicy!" Accordingly, what they specialize in is chili-loaded miso tsukemen (dipping noodles), a dish they serve moderately well, if not masterfully. 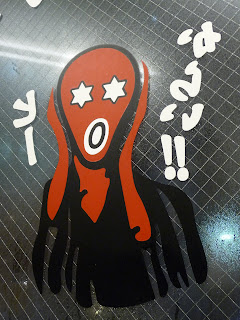 For whatever reason, both branches of Takagi-ya are on the second floor of the buildings they occupy. This is somewhat unusual for a noodle shop, since generally cooks want to avoid having to schlep the heavy loads of ingredients and oversized cooking equipment up and down the stairs if they can avoid it. 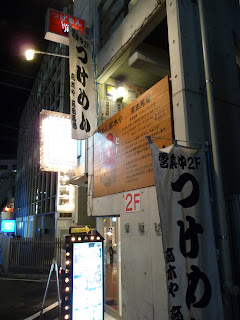 So keep your eyes peeled for the tsukemen (つけめん) sign and the little red guy. 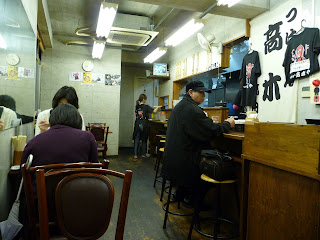 Inside, Takagi-ya is pretty standard no frills ramen joint, albeit a bit wider and more spacious, and having just a touch of that casual provincial restaurant feel. 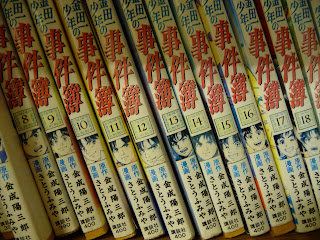 There's a little bit of counter space, but it's mostly tables, so I grabbed a chair, grabbed a volume from their sizeable manga collection (always a nice touch), and sat myself down. Takagi-ya is definitely a tsukemen shop and not a ramen one - although they offer one ramen option hidden at the bottom of the menu, choices are pretty much limited to tsukemen or "bukkake-men" (splashed-on noodles), that have a small amount of soup and some veggies, tofu, and meat dumped on top. I was tempted by the bukkake (...and this is the only time I will write this sentence), but decided to stick with the standard. There's a variety of spicy options ranging from the spiciest "spicy miso", to "mixed spicy miso" to "mildly spicy miso" to...wait for it..."non-spicy miso", plus a shôyû (soy-sauce based option). Naturally, I went for the spiciest one on offer. 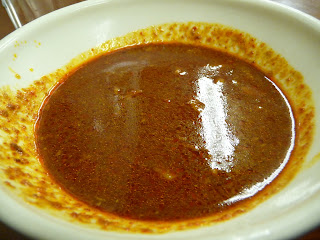 Definitely red, and a bit thicker than average, almost thin gravy-like, with a small amount of meat hanging out at the bottom. This is all the meat you get unless you order châshû (roast pork) for an extra charge - what's the deal with tsukemen places charging as much for lukewarm noodles and a little broth as most shops do for a fully loaded bowl of ramen? Not that I eat meat, but I call bullshit on that. 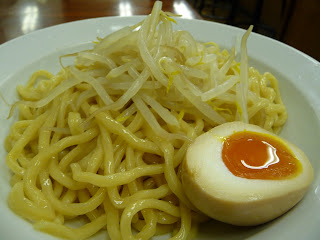 The noodles were mega thick and rough cut, owing more to Jirô style noodles than standard thick tsukemen noodles. In any case, that's just how I like 'em, and Takagi-ya is strong on that front, though the dough tasted perhaps just a bit too starchy, which is of course a relative term when you are discussing...uh, about 250 grams of pure carbohydrate. I still just can't get used to tsukemen's room temperature noodles though. Next time I need to remember to order them atsumori (that's "extra hot", not a reference to the medieval Noh play of the same name). The egg was gloriously gooey and runny in the center, if a bit bland. 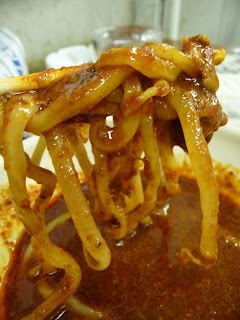 So, how did the two taste together? That is the essential question when discussing tsukemen, is it not? The answer - not bad. Not great, but not bad. The broth is certainly spicy, though nowhere near the atomic power of Nakamoto Tanmen or Nong Inlay's Shan noodles. There's a bit of bite, but unfortunately Takagi-ya's broth doesn't bring out the deep flavor of a good chili pepper - instead it tasted a bit vinegary and somewhat overpoweringly salty. Tsukemen broth is always more condensed than ramen soup, but I found myself puckering a bit. Nonetheless, it was tasty enough, and the noodles were properly mochi mochi (chewy), which always gives a little bump of pure physical satisfaction. 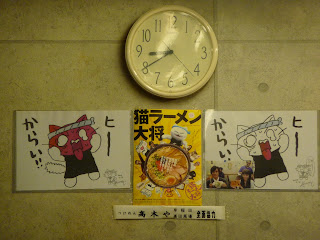 The thick broth and thicker noodles meant each bite picked up a lot of flavor, and Takagi-ya sated the hunger, even if it didn't blow me away, like they did this cartoon cat. Actually, this is a particularly famous cartoon cat, one who loves ramen and began life as a manga character before getting his own anime series, and now, live action movie.

Please, please, please watch this trailer. I promise you will not regret it. It is mental. The movie stars a bunch of cats, a few hand puppets, and um, a 14-year-old who is famous for having a huge rack. I had never heard of Neko Ramen ("Ramen Cat") before, but I guess now I have to check it out. It seems the Ramen Cat is not alone in his love for Takagi-ya, as I was somewhat surprised to find about two dozen magazine clippings posted on the wall on the way out. All in all, I'm not sure if I would go back to Takagi-ya, but it was nice to get a bowl of tsukemen offering something a bit more interesting than the standard thin shôyû and fish stock broth. It'll do in a pinch, I suppose.
Posted by Nate at 8:50 AM