It seemed like Garasha had been closed forever. Just before New Years, a sign was posted on the door that the shop would be closed until further notice due to an unforeseen injury. I kept checking back, but every time was greeted with nothing but the same note, albeit a bit more curled and faded with every passing week. Would that be it for Garasha? It had just opened a few months ago, and was billed as a promising newcomer, but would it die before it ever had a chance to blossom? 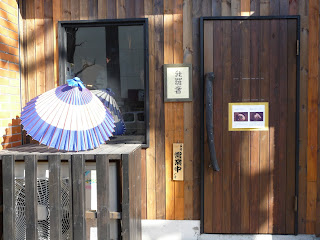 But last week, Garasha was blossoming again, or at least, the huge bouquet of flowers to celebrate the reopening was. Also blossoming inside was the scent of garlic and liquified pig, the flame to my hungry moth. When I asked the cook what had happened, he told me that the previous cook had gotten injured, making a "thrown out his back" gesture; after the closure, the new guy had stepped in to take the old master's place. But would Garasha be worth the wait? 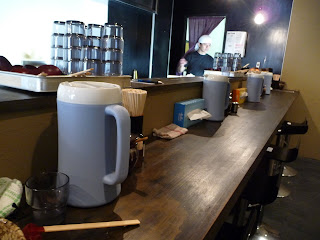 Located on the east side of Meiji-dôri just south of the Babakuchi intersection, Garasha is right next to Kitarô, making for a one-two new ramen punch. When I walked in, I was greeted with a dark, earth-toned minimalistic interior in the style of popular shops like Watanabe; the outside is also very difficult to distinguish as a ramen shop, with only a small wooden sign laid against a gray wall, also a bit like Watanabe. The next thing that caught my eye inside was the stack of Ramen Bank magazines near the vending machine - although I'd been following the free monthly mag online, this was my first time to snag a paper copy, and it makes for nice reading to flip through while waiting for your bowl to come up. 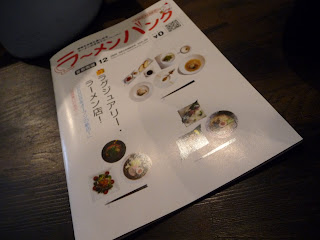 Signs like these indicate to me that Garasha is definitely interested in "the scene" part of the ramen world. Being aware of the new styles and trends can be a plus or a minus - on the one hand, it means shops are trying hard to create a distinctive bowl and a positive and consummate eating experience. On the other hand, sometimes this results in shops slavishly following trends and churning out bowl after bowl of overconceptualized and overpriced blended fish stock soup, so its a bit of a toss up. 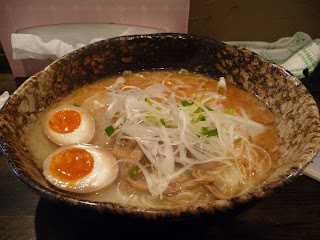 Fortunately, Garasha does not fall into the latter camp, and does deliver to the slurper a satisfying experience. Somewhat unusually for a shop of this type, the cook presents a ticket to customize your bowl, but, unlike often weaker shops that allow the customer to customize the taste of the soup, Garasha's options are limited to the noodles, so you can get Garasha's ramen the way you want it. 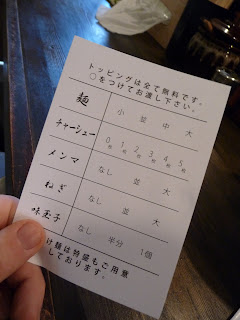 And the options are very generous, with four sizes of noodle serving, selectable amounts of menma (pickled bamboo) and sliced onions, and most impressively, up to five (!) free slices of chashu (roasted pork). I selected none, but the cook goofed and gave me a bowl with a few - I sent it back, but not before noting that they looked substantially thick and tasty - five thin slivers of pig these were not. 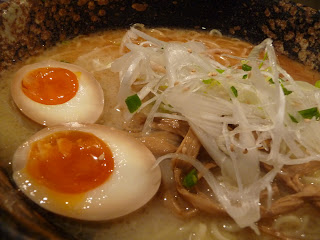 When the (beautifully crafted stoneware) bowl was hoisted over the counter, the sheer volume of noodles almost hid the soup from view. I selected the basic ramen, which is a garlic tonkotsu (pork bone soup), but Garasha also offers the soup served with shio (salt) and shôyû (soy sauce) tare (flavor essence). The taste of the burnt garlic oil (mâyû) hit the first sip hard, not in a typical garlicky way, but possessing rather more of a surprisingly tangy taste, which mellowed out a bit over the course of the bowl. Rather than an old school porkyporked out tonkotsu, Garasha's soup borrows a bit of the "clearer" flavor of shio ramen while still delivering a broth that is thick and satisfying, if not delicious enough to make one drop to one's knees in ecstasy. 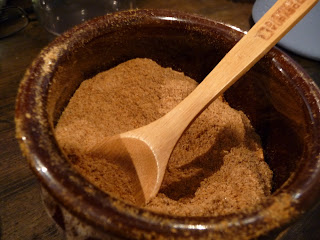 One nice touch I hadn't seen before was a small ceramic bowl filled with dashi (fish stock) powder - while I had heard tell of some restaurants placing a lump of pulverized dried fish skin straight in the bowl, Garasha allows you to tailor the degree of fishiness to your own taste, which I found very appealing, since I'm not as big into the fish stock soup trend as many other ramen fans. I tapped in just a little and found it to mellow the garlic in a very pleasing way, adding complexity without overwhelming the soup, which I far prefered to the extremely fishy taste at places like Watanabe around the corner. The weakest link was probably the menma, which was as shrivled a winter wilmo. 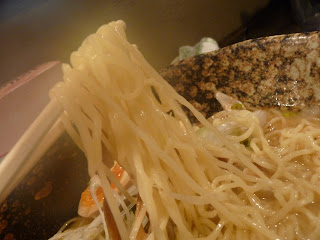 The noodles were pretty standard, whitish and medium thin, a bit "stringier" perhaps than some, and while not overly firm, held up admirably over the course of the many minutes it took me to polish off this to-the-brim-filled bowl. I had somewhat unthinkingly selected the largest noodle size, which was a larger force to be reckoned with than I had been prepared for. I left with belly bursting, and noticed a few hours later that I had not been blessed with the scent of vulcanized pork fat emitting from my pores, which was a nice change of pace for a bowl of tonkotsu. Garasha is good ramen bar none, but it just didn't have quite the extra oomph to make me really fall in love. Between the two neighbors on the block, I'd probably choose Kitarô, but I wish Garasha the best, and they deserve the buck of any ramen fan at least once - and keep in mind that you get a lot of bang for that buck if you get five pieces of chashu and double noodles for 700 yen!
Posted by Nate at 8:16 AM