I thought that I was noodled out after "Ramen Girl"", but taking a break was not in the cards. After the movie, I spent a couple hours hanging out and drinking beer on the street in Kabuki-chô while waiting to meet a pal so we could hoof it out to the suburbs to check out the Lou Reed "Berlin" concert film. Kabuki-chô is Japan's biggest and most notorious red light district, and is a great place to do some people watching; the endless parade of big-haired hosts and hostesses, equally big-haired touts, drunken businessmen, Chinese tourists, the occasional gangster, and befuddled visitors from the countryside never gets old, especially with a couple Asahi brews in your system.(Photo of big-haired hosts from the Japan Times) 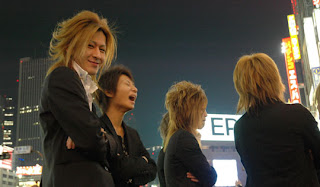 When my buddy showed up, we did a lap of the area, threading through streets filled with massage parlors, strip joints, love hotels, "pink salons," bars, and of course, plenty of ramen shops. Although its become a bit more laissez-faire in recent years, Kabuki-chô is still largely a man's world, and most of the restaurants in the vicinity skew towards greasy stuff to eat when your wife isn't looking. Plenty of yakitori (grilled chicken), motsu nabe (pig offal hot pot), tonkatsu (deep fried pork), and so forth. Almost all of the ramen shops in the area are, perhaps unsurprisingly, Hakata-style tonkotsu (pork bone soup) joints, serving that most dudely and unhealthy of all ramen types. 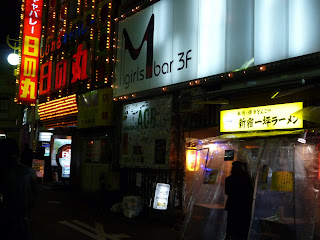 There were a few tempting-looking options, including numerous locales of the always dependable Hakata Tenjin chain, but the branch we tried entering was packed to the gills, so we decided to keep searching. This ended up being a blessing in disguise, as the shop we found outshone not only Hakata Tenjin, but almost every bowl of Kyushu ramen I've had since arriving in Tokyo. We reached the backside of the main zone of Kabukichô, where the neon signs give way to darker streets filled with hourly hotels, and just as we were about to turn around and head back, a small sliver of yellow sandwiched between cabaret clubs caught my eye - bingo! 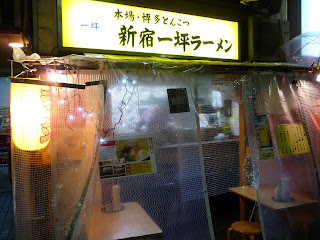 Shinjuku Hitotsubo isn't a ramen shop so much as a tiny "yatai", a streetside stall, cart, or in this case, something akin to a lean-to shack, easily the tiniest ramen venue I've had the pleasure to eat at in Tokyo. "Hitotsubo" means "one tsubo," a traditional measure of area equivalent to about two tatami mats. Thick clear plastic curtains hang down, shielding two tiny tables from the winter winds. Inside (if you can call it inside), a counter holds four, with a small serving area; the kitchen seemed to be just around the corner in the back of the shack. It's the kind of place that might be a bit intimidating to the uninitiated slurper, a ramen shop reduced to its most extreme fundamentals - perhaps a part of daily life in Hakata, but a bit unusual in 21st century Tokyo. In any case, we were warmly welcomed by the elderly cook up front and the older woman shuttling back and forth between the front and the back of the kitchen. 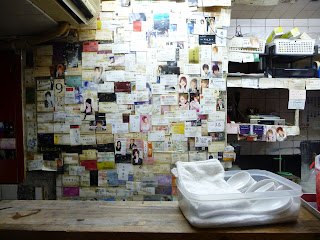 It felt cozy and perfect for a wintry night, perched on a tiny stool and awaiting a steaming bowl of tonkotsu soup - a minimalist and yet fully-realized ramen experience. Like in a Golden Gai bar, you're elbow to elbow (or more) with everyone else at the counter, in our case, a chubby fellow slurping down noodles at twice our pace. I would guess that a large number of the clientele are drunken businessmen on their way to or from a night of for-hire sexual satiation, and ased on the state of the back wall, Hitotsubo serves a fair amount of hosts and hostesses, many of whom have tacked up their business cards, which make for interesting viewing while waiting for the noodles to come up. 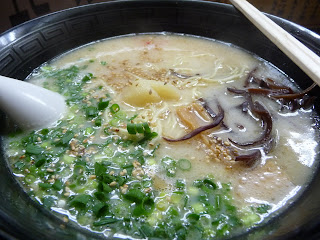 The noodles, ah the noodles. As close to an unreconstructed Kyushu-style bowl as you are likely to find in Tokyo. Creamy but not greasy white tonkotsu broth, plenty of thin green onions, just enough kikurage (wood ear slices) and menma (bamboo shoots) to get by, and fresh white sesame and garlic tableside. No beni shôga (red pickled ginger) or takana (spicy mustard greens), but when your soup and noodles are this good, who gives a shit? The first sip was a revelation. There's a certain feeling, a certain taste. Say you've eaten a particular food dozens of times, but then you get a chance to sample a really legit rendition of it. My first fully loaded burrito in San Diego, after having eaten hundreds of burritos that I then instantly realized to be inferior. My first slice of pizza after moving to New York. There's an experience of tasting "the real deal" that's not quite like anything else. It's not even necessarily a matter of "better" or "more delicious," just a certain quality to the taste and to the whole experience that's almost unmatchable. Now I've been to Kyushu and eaten ramen there, but I can't front that I've toured the ramen stalls of Hakata; nonetheless, I feel confident in stating that the tag of honba (in the style of the original place) on Hitotsubo's sign is far from false advertising.

We slurped feverishly, and of course, each called for a kaedama (helping of extra noodles). Unlike in the somewhat disappointing bowl at Nagahama-ya few days earlier, all the flavors (pork, garlic, sesame, onion) blended together to form that perfect storm of Hakata goodness. The noodles were al dente and just right, and a small sign in the back indicated that they offer the whole gamut to barely-cooked kona otoshi noodles. The old couple who run Hitotsubo clearly know what they're doing, and it's no wonder that they seem to be a Kabuki-chô institution. On the way out I asked the master if he was from Hakata, and he said that he wasn't, but that the previous cook was, and had taught him his tricks. A far cry from franchised by-the-book tonkotsu, this is as grassroots as it gets - an old dude from Kyushu with a little stall, some folding chairs, and a secret recipe. Highly recommended.


By the way, the Lou Reed flick was fantastic - perhaps a bit of overdirecting on the part of Julian Schnabel, but the main man's craft, performance, and ragged voice, as well as the gorgeous arrangements including backing vocals by Antony, Sharon Jones, and the Brooklyn Youth Choir rendered any complaints moot. Rock opera at its finest - if you have any chance to see this film, don't miss it!
Posted by Nate at 7:42 PM