I've been posting frequently, but it's been a bit since I actually hit up a ramen shop in the greater Takadanobaba / Waseda area. Today I headed over to Udatsu Shokudô, located along Shin-Mejiro-dôri behind the Waseda main campus, just across the street from the Rihga Royal Hotel. 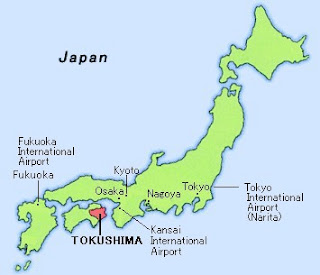 Udatsu's full name is 阿波徳島中華そばうだつ食堂 (Awa Tokushima Chûka Soba Udatsu Shokudô) - this tongue-twister actually gives some important clues as to what kind of ramen is on offer at Udatsu. Tokushima is one of the four prefectures located on the island of Shikoku, the smallest of Japan's four "main islands"; Awa is the former name of Tokushima, from when it was a feudal domain; Chûka Soba means ramen; Udatsu is a kind of traditional architectural feature; and Shokudô means "cafeteria." As should be evident, Udatsu specializes in Tokushima-style ramen. Tokushima ramen is well-regarded enough to be generally recognized as a "major style," but it still probably falls into the second or maybe even third tier of ramen fame; it's certainly no Hakata, and is probably even less well-known than it's cross-strait kissin' cousin Wakayama ramen. 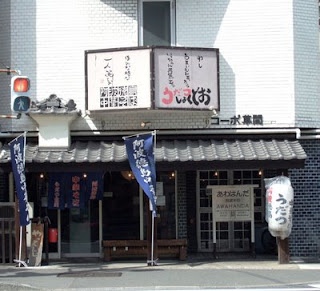 There are only a handful of Tokushima ramen joints in the greater Tokyo area, and Udatsu takes a lot of pride in its heritage. A lot. The "Udatsu" part of the restaurant's name refers to the architectural feature of the small vertical pillar on the roof (on the left side of this photo borrowed from Udatu's website), which are famously well-preserved in the Tokushima city of Mima. 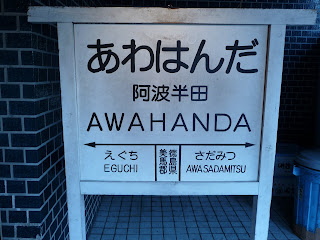 Also outside is a wooden railroad station sign to add to the countryside feel. Inside there are more train maps and scheudles pasted up, in addition to more Tokushima tourism posters than your average travel company office. The whole place is done up in rustic wooden country-house style, with a peppering of old-fashioned ads and dangling globe lights. One of the most famous tourist attractions in Tokushima prefecture, far more famous than its ramen, isn't really in Tokushima prefecture at all, but just off-shore. Beneath the span of one of the world's longest bridges are the Naruto whirlpools, which are the biggest and most famous in Japan. The lower deck of the bridge has a viewing gallery from which you can observe the swirling waters from a safe distance; before the bridge was built about 25 years ago, the whirlpools made the Naruto ("Wailing Gate") strait from whence they get their name a treacherous one to cross. 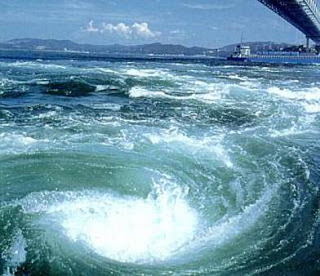 Of course, these days, the name Naruto conjures up something else to most ramen fans - namely the small disk of fish cake found in some bowls that features a hot pink abstraction of the whirlpool from which it draws its name: 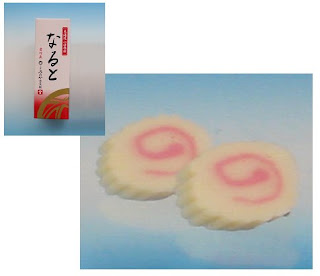 Or maybe you know the name from the wienery-yet-inexplicably-popular animated ninja that wears a Naruto-emblazoned headband: 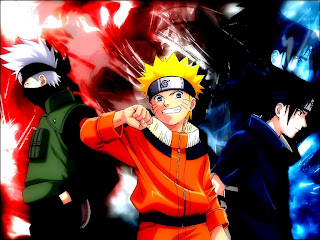 In any case, despite being from the home of one Naruto, Udatsu's Tokushima ramen featured no naruto floating on top. It did, however feature a delicious bowl of noodles not quite like any other bowl I've had yet. Although I've been to Tokushima, it was only for a few days about six or seven years ago, and I must admit that I didn't know the first thing about Tokushima ramen before walking into Udatsu. 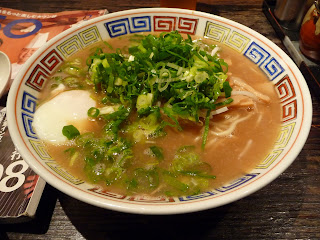 I went with the "negi ramen" (green onion ramen), and ordered an egg on top. Which brings me to the first of Tokushima ramen's defining characteristics - rather than the much more common boiled egg, Tokushima ramen shops serve up bowls featuring raw or half-boiled eggs. However, the "half-boiled egg" (hanjuku tamago) at Udatsu is not a soft-boiled egg, as is usually the case, but a semi-boiled egg with runny whites far from solidfying, much closer to what is generally known as an "onsen tamago" (hot spring egg). 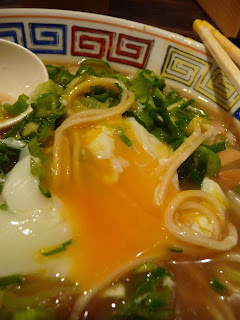 Apparently the other major characteristic that sets apart Tokushima ramen is the use of "butabara" pork belly, as opposed to standard châshû, but I passed on that part of the dish. My first sip of caramel-colored soup revealed a medium-thick and not at all greasy broth - after going home, I googled up the fact that Tokushima ramen is a tonkotsu shôyû (pork bone and soy sauce) blend, but it's a far cry from a seemingly-similar blend at a place like Jirô. Rather, Udatsu's soup reminded me more of Tenka Ippin's Kyoto-style ramen than anything else, so I wonder if there may have been some chicken in the broth as well. Definitely a very "old school" ramen flavor, though a different kind of old school than the thin and clear Tokyo-style shôyû soups. 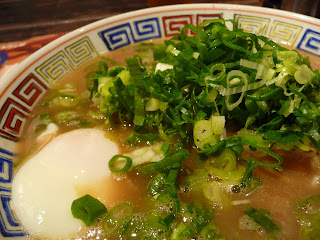 The excess green onions matched the soup well, and bamboo shoots, though a bit small, were also in plentiful supply. There were a couple bean sprouts hidden under there somewhere, but I didn't really notice them. The onions almost thicken the soup as they get soggy, and each pull on the medium-thick medium-wavy noodles pulled up plenty of the onions along for the ride, making for tasty bite after tasty bite. 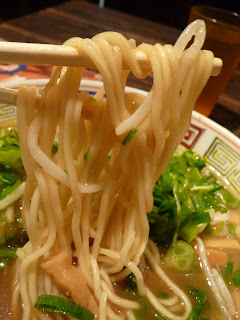 While I ate, I took a flip through O5O magazine, a magzine for "people over 50 who want to get the most out of Tokushima," and before I knew it I had drank the soup down to the very bottom, which is of course a very good sign. It was nice to finish a bowl that didn't leave me feeling heavy or greasy in the slightest. 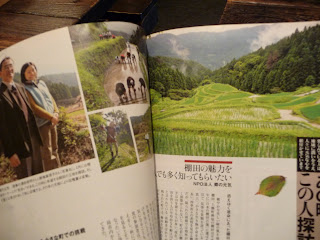 One last interesting point about Udatsu is the fact that it had perhaps the most unusual bathroom situation I have seen in Tokyo thus far. Open the door marked "bathroom" and you step into a long warehouse-like corridor filled with boxes of noodles and other ingredients, old pots, rainboots, and other sundries. There was even a washing machine back there! 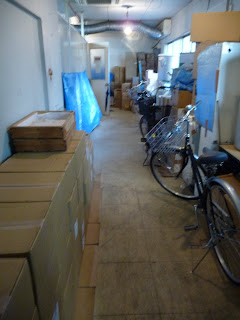 When even the bathroom feels that much like it belongs in the countryside, you've really accomplished something. 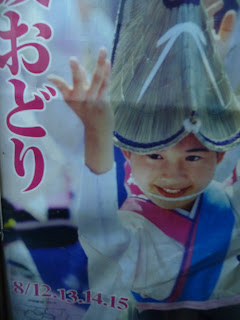 On the bathroom door was a poster for Tokushima's other most famous attraction - the Awa Odori dance, held every year in mid-August during Obon, the festival of the dead. Cities and towns across Japan hold local "Bon dance" festivals, but Tokushima's is perhaps the biggest and most famous in the country, with thousands parading through the streets. The Awa Odori has been going on for hundreds of years (though apparently went through a major revivification effort after the economy collapsed in the 20s), and people come from all over Japan to watch it and participate in it, and, if you trust the old man my friend met on the boat, have casual sex. The lyrics of the most famous dance tune go a little something like this:

I'm not sure if Udatsu's noodles are enough to make you get up and dance your way home, but they were a very tasty introduction to Tokushima ramen and a good choice for mixing it up.
Posted by Nate at 2:01 AM

Well done! I was in Japan last week and was just googling a recipe for Tokushima ramen! Delicious! I found your blog very interesting thanks. I'm gonna have a go at my own recipe and try to recreate the delicious meal i had last week. Wish me luck! Love the dancing video too. I saw them too it was amazing!

Never been to Japan but I'm already a fan of Tokushima Ramen.

Men oh Tokushima, a ramen-ya in LA, is my favorite ramen shop. I will visit Japan in December for the 1st time and I hope I will have a chance to try an authentic bowl of ramen with super yummy stirfry pork belly in Tokushima!!!

I like the post format as you create user engagement in the complete article. It seems round up of all published posts. Thanks for gauging the informative posts.