Not all ramen visits are planned. I left my house without intending to eat a single bowl, but by the time I returned this evening I had downed two. Such is the way of the world, at least in Takadanobaba. I headed out in the early afternoon to meet a buddy, and had been thinking about grabbing a quick snack of some udon or a sandwich on my way to the station, but on the north side of the street just west of the Babakuchi intersection, this sign caught my eye: 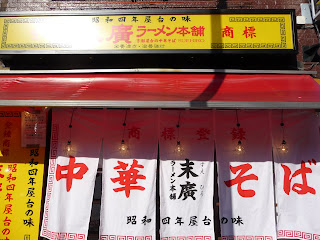 The spot had been vacant since I arrived in town a couple months ago, but it looks like the wrapping has come off to reveal a newly birthed shop - Suehiro Ramen Honpo. Apparently yesterday was their first day in business, so I decided to nix the udon and drop in for a bowl. The sign out front advertises "Kyoto street stall (yatai) ramen, as served since 1929." So why is Suehiro the branch of a shop based in Akita...800 kilometers away from Kyoto? Apparently Suehiro traces its heritage to Shinpuku, a Kyoto institution - these days, Shinpuku is no longer a ramen shop, but a wholesale noodle supplier; however, the secret soup recipe has been officially transmitted to Suehiro, which runs shops in Akita and Aomori, in deepest Tohoku (rural Northeastern Japan).

The secret recipe in question is for a very old-school, rich and classic shôyû (soy sauce) broth, made with not only pork stock, but also chicken bones and vegetables, in the classic Kyoto style. The basic ramen at Suehiro is a strong shôyû, with other options on the menu including shio (salt) and assari shôyû (a more diluted broth). I went with the standard and added on a topping of butter - butter is pretty common on Sapporo-style miso tonkotsu ramen, but I hadn't seen it paired with shôyû before, at least not since begging my mom for white rice with butter and soy sauce on top for dinner when I was 7. There were also a few basic sakes on offer, though it seemed like they were too understaffed to offer the fried rice sides listed on the menu. 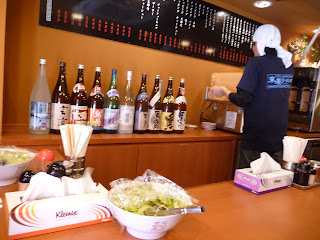 However, not long after I bought my ticket, I began to regret my decision to just "pop in." When I took a look at the counter, there was only one customer busy slurping, while five more waited for bowls and another two had yet to hand in their order tickets. Three empty but uncleared bowls sat on the counter, as a single cook worked busily in the back. The omens were less than rad. It took a full ten minutes for said cook to make it back to the counter to take tickets, clear bowls and bring out the orders he had been preparing. I'm not uptight when it comes to stuff like this, but I was in a hurry, and got a bit irritated. Eventually another younger cook popped up (maybe back from break?), and things got moving. 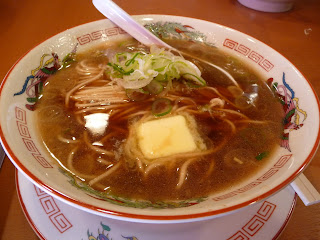 The bowl I received was as barebones as they come. A dark, dark brown soup, a serving of noodles, the pat of butter, and nothing else. A large container of sliced onions sat on the table for the taking, but that was it. Seriously dudes? You're gonna charge me 700 yen for a bowl of ramen, and I don't even get a few slivers of menma (bamboo shoots) or nori (dried seaweed) for that? In Japanese, you'd say Suehiro has low "cosuto pafômansu." 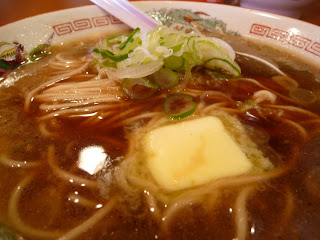 After sending a couple of text messages to my friend apologizing for my tardiness, I got down to chowing down. The soup was simple, but tasty, definitely richer and darker than your average Tokyo style shôyû (probably due to the chicken stock), and lacking the fishy "Japanese-taste" (wafû) undertones. A wee bit salty, but the butter added a mild edge making it eminently sippable, if not epochal. Onions were crunchy and copious, and a glance around the room revealed bowls loaded with big thin and floppy slices of pork belly (butabara). 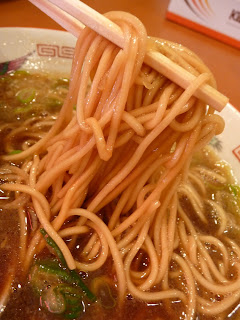 The noodles were above average - long, medium-thick, and very straight, apparently sourced directly from the Shinpuku factory in Kyoto. The portion seemed a bit on the small size; maybe no smaller than anywhere else in town, but certainly not as generous as at Ramen Shop the night before. All in all, it didn't add up to a great experience at Suehiro. I would have quickly forgotten the awkward wait if the ramen had blown me away, but it didn't. For 700 yen, all I got was noodles and onions in soy sauce - not a great deal. Don't get me wrong, Suehiro wasn't bad, just kind of not worth it. Since Shichifukujin down the block just closed, a shôyû-scented hole had been gaping, and Suehiro opened up just in time, but I don't think I'll be back.

Apparently this is Suehiro's second try to break into the Tokyo market - a few years ago an ill-fated branch in Okubo only lasted a few months before folding. Nonetheless, I wouldn't be surprised if Suehiro ends up commanding quite a following - it's got a pedigree, and does fill a specific niche, adding diversity to the scene here in 'Baba. Strong, plain shôyû ramen definitely serves a specific need in the current market, and the clientele today seemed to skew to the over-40 crowd - in other words, those who grew up on shôyû ramen out of necessity. I guess we'll see how Suehiro does after working the kinks out in the coming months.
Posted by Nate at 4:44 AM

I used to eat here a lot while I was living in Japan. It brought a tear to my eye to see pictures of it as unexpectedly as I did.

I'm deeply saddened to see that it has fallen this far. I would like to believe that it might have just been because it was earlier in the day. Every time I'd ever gone, the place was packed.