No, that's not a placeholder or a typo, tonight's bowl was downed at a ramen shop named...Ramen Shop. The jury is still out as to whether that is the best or worst possible name for a ramen shop, but the good news is the noodles delivered. It had been a long day that involved poor sleep patterns, injections, too long subway rides, and pain killers (not the fun type, just regular ones), and I wanted a steaming hot bowl of tasty soup to get me back to full health. I was meeting my buddy Schultz (of the amazing, inimitable Greatest Japan Blog of All Time, Tokyo Damage Report), and had just enough time to sneak in a bowl of noodles for din-din. Apparently the hyphen in "din-din" is a necessary; without out it spell check does not approve.

This is what I got when I tried a Google Image search for "self referential." Ramen Shop, just west of the intersection of Waseda-dôri and Meiji-dôri was on the way, and I hadn't X'd it off the map yet. For some reason it always seemed to be closed, but in retrospect, I think it's just that they took an extended holiday season break. I'm a yutz and forgot to take a picture of the sign out front, but it's a big red and white thing that says "Ramen Shop" in katakana (ラーメンショップ). Apparently it's part of a chain all over the greater Tokyo urban area, but most locations are in the suburbs on the edge of town. 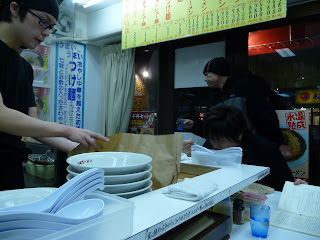 Inside, Ramen Shop is straight up no frills ramen shop all the way. Uhh, it still feels a bit weird to write sentences like that, given the name of the...ramen shop at hand. All white walls and counter, bright fluorescent bulbs, packed with besuited salarymen busy carboloading between working and drinking. I think part of the reason it may have been so crowded is because Friday is Discount Ramen Day, with basic bowls clocking in at a meager 350 yen a pop, though this will change to Thursdays in a couple weeks.

I was a bit skeptical at first - between the name and the cheap prices, Ramen Shop seemed to have a relatively good shot at sucking. But when I got inside, sidled up to the counter and began to watch bowls being prepared, I started to get a good feeling. Ramen Shop has a very low counter, so you can watch the cooks at work, which is always a pleasure. I had expected maybe a kind of lame thin shôyû broth, but the younger cook whipped out a special shaker to decant chunks of fat into the very rich-looking milky brown shôyû tonkotsu (pork bone soy sauce) soup, and I started getting excited. 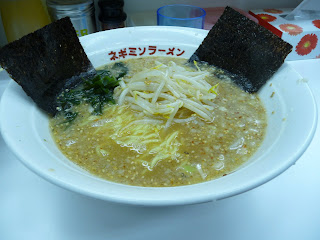 Since it was my first time at Ramen Shop, I decided to pass on the discount dish, and get the shichimi su ramen - ramen with vinegar and seven spice blend. Not items that generally find their way into the ramen bowl, the seven spices are, for the record (usually) - red chili pepper, orange peel, sesame seeds, Sichuan pepper (sanshô), dried seaweed (nori), hemp seed, and either ginger, shiso, or poppyseed. When the bowl found its way to my side of the counter, I was happy to see a nice big cauldron filled with a larger than average mass of noodles topped with some shreds of wakame seaweed, bean sprouts, sesame seeds, and two big Mickey Mouse-ears of nori.

The soup was good. Damn good. In fact, so good, that I regretted ordering the version with vinegar and seven-spice; though the bit of tingle from the spice was nice, and the acid helped cut the grease of the soup, in the end I felt like they got in the way of a surprisingly rich and tasty tonkotsu shôyû broth. Not Jirô fatty, but getting there, with plenty of suspended fat floating on top. Really savory and tasty, without being too salty, though I must admit I still have that greasy feeling in my mouth that often lasts a few hours after a bowl of tonkotsu shôyû. In addition to the basic bowl and the vinegar varietal, Ramen Shop also offers a negi (onion) ramen, and a nori ramen packed with seaweed, as well as all of the above with miso, rather than shôyû flavor. 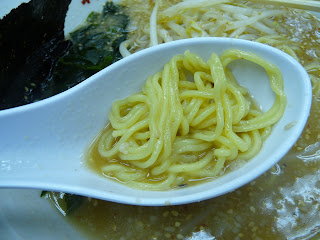 The noodles were as old school as the vibe - totally yellow, totally curly, and a lot "sproingier" than average. I think this is due to a high amount of kansui, mineral water blended with alkaline salts in the dough-making process - it's the salts the give the noodles their distinctive yellow color, not eggs. More alkaline salts mean more "give" in the noodles, which give them that nice chewyness and protects them from becoming too soft too soon. Though I must say, if anything Ramen Shop's noodles may have been a bit too stretchy. In any case, there were a lot of them, so I can't complain. 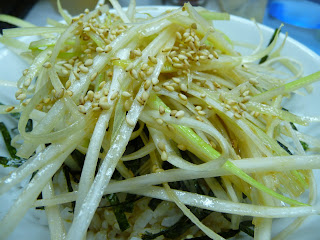 In addition to the noodles, I got down with some negi-don, rice served with sliced long onions and savory tare (flavor essence). The onions were sweet and smoky and not too "oniony" at all; together with the noodles, they made for a nice filling "full course" dinner. Ramen Shop was a hell of pleasant surprise. I came in with low expectations and came out smacking my dang lips. A really solid tonkotsu shôyû is always a good thing to have close to hand (or mouth), and if you can pick up that bowl for a measly 350 yen, then you got your bad self a shop you gotta go back to.
Posted by Nate at 6:22 AM