Today I tried for the second time to go to Heaven's Kitchen Reon, but struck out again. The store had a sign up saying "Open 11 AM - 11 PM, Mon - Sat," but they were closed at 2:30 PM on a Saturday. Stymied again, I headed back up to Waseda-dôri west of the station to tick another shop off the list. 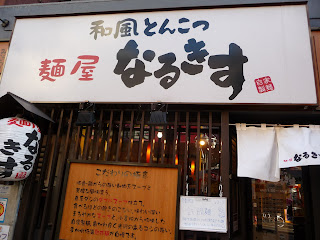 Narukisu was the first place that caught my eye, so I parked my bike and ducked inside, too hungry to really care what I was about to put in my body. I don't have much of a clue what "Narukisu" means. I once met a guy in a sushi bar in Kyoto named Naruki, and apparently there is a pornographic anime computer game also called Narukisu, but neither of those shed a whole lot of light on the origin of the name. 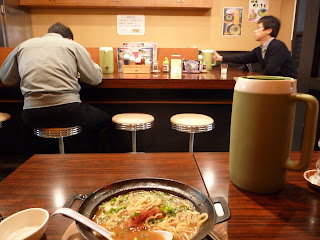 Inside, Narukisu is pretty nondescript, with a few tables and a counter and the kitchen hidden away in the back. Pretty much all the customers were men in their 30s and 40s, one of whom let an awesomely loud fart mid-meal. When I got a glimpse of him later, he looked like the kind of guy who would let an awesomely loud fart in public; a man of considerable girth, with big glasses and a flat top. Yesssss.

Narukisu offers all four main ramen types - shôyû, tonkotsu, miso (in both red and white varieties), and shio. All are based with a "wafû tonkotsu" (Japanese style pork) broth, made of pork bones, chicken, sardines, konbu seaweed, and bonito. In otherwords, the blended-seafood "W" (double) soup. Places like this generally don't really appeal to me, in that they just kind of offer up the basics, without really specializing in any one style, and are trying to be all things to all people. The current limited seasonal item was tetsunabe ramen, ramen served in an iron pot - that sounded the most interesting to me, so that's what I went with. 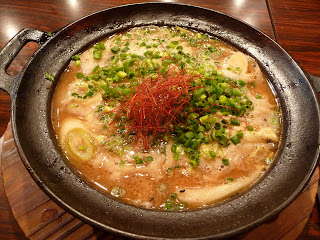 Iron pot shôyû was on offer, but I got the iron pot miso; rather than cook the noodles separately and put them in the soup, the noodles are cooked directly in the soup itself. The first sip revealed just a faint hint of seafood taste, mostly overpowered by the miso, and perhaps even more prominently, the substantial dusting of black pepper on top. The fact that just some black pepper could hide the taste of the soup did not bode well. My complaint with Narukisu is that their broth was completely without what you might call tokuchô, defining characteristics. Between the chicken, the pork, the seafood, the miso, and the garnishes, there wasn't much of any distinct taste to the soup, other than just a fattier miso. I guess a critic would say it tasted "unfocused." The iron pot also kept the soup uber-hot for a long time, which is rough on the tongue. 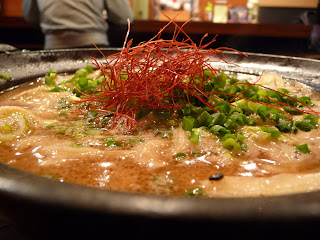 What I did like was the abundance of vegetables - there was plenty of Chinese baicai cabbage, a thick layer of tiny spring onions, and best of all, a generous helping of naganegi (long onions), which are sweet cousins of leeks. The mysterious red things also put in an appearance. As a whole it was actually not a bad dish, but the whole impression was closer to something akin to a miso-flavored hot pot that happened to have ramen noodles in it, rather than a proper bowl of ramen. 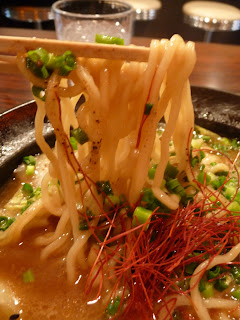 The noodles were jikaseimen (home-made noodles), though more likely made specially at a third-party location then shipped to all the Narukisu locations, since it seems to be a decently-sized chain, at least in the Tokyo area. Boiling noodles directly in the soup can sometimes make them soggy, but these held up well; however, despite staying nice and chewy, they were pretty generic wavy and yellow noodles, awfully thin for noodles advertised as futomen (thick noodles). Again, competent execution completely without distinctive characteristics.

Narukisu was OK; not the worst bowl I've had. The iron pot thing was kind of fun, but I don't think I'd come back here. This is serviceable ramen that could sell in the US or in a train station somewhere, but I have a hard time believing it leaves much of an impression on anyone long after the eating is over.
Posted by Nate at 10:21 PM

I was shocked to visit this awesome and good updated website now. I needed to thank you for this fantastic articles!
Good Day dear Admin
--------------

This blog is so nice to me. I will continue to come here again and again. Visit my link as well.
Good luck

Cox login
Cox communication is a telecommunication company based in the United States. During this they offer high-speed internet free emails to customers. As a result, Cox provides its users with security tools and other settings to customize their email experience. Cox communication offers best email service.


With Xfinity Login, we deliver customers all their favorite entertainment – any time, anywhere. As a result, Xfinity X1 is a game-changer, allowing millions of people to search and discover the content they love like never before. And with the X1 Voice Remote, just say what you want and see it on screen. Therefore, Xfinity Stream extends this X1 experience to laptops, phones, and tablets, giving customers even more flexibility to enjoy their entertainment, at home.