After the less than rad bowl at Suehiro this afternoon (see below), I spent the rest of the day hanging out with my buddy, his wife, and a couple other pals. We crisscrossed back and forth across Ôkubo, Tokyo's biggest Koreatown, located just north of Shinjuku. After some toppogi (rice cakes in spicy gravy) and beer streetside, we spent the better part of the day chilling at The Ghetto. Now, you might be thinking that The Ghetto is a bizarre and possibly inappropriate name for a building in the middle of one of the largest ethnic minority neighborhoods in Japan. You would be right, but that does not make The Ghetto any less chill of a place to visit. 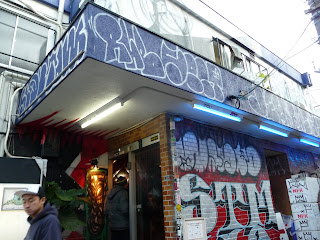 Nestled in the backstreets just north of the main drag of Shokuan-dôri, The Ghetto is a former love hotel turned Skatepark / Bar / Art Gallery / Minimall / Store Where You Can Buy Toddler-Sized Suicidal Tendencies T-shirts and Thasher Logo Bibs. Yessssss. (Skip forward to about 0:45 on this video).

The single best thing I saw for sale at The Ghetto was, hands down, without a doubt, this: 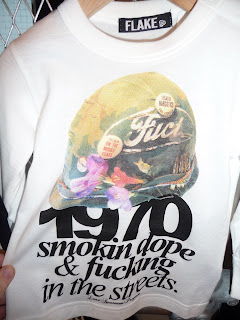 It would be a stretch to fit this on a three year old. I almost want to have a child for the explicit purpose of having him wear this shirt. In any case, after plenty of beers and some squid guts, consensus was reached that what the evening needed was a quick bowl of ramen before splitting up and heading home. Fortunately, just around the corner was Nagahama-ya, a Hakata-style joint serving up the classic thin white noodles in muddy white pork bone tonkotsu soup. For all the ramen reviewing I do, in the end, this is really how ramen is meant to be eaten - after a few beers, quickly, without too much care, on the way to the train station. In the end, this is the bread and butter of the ramen shop, and the Hakata ramen shop in particular. Wait a minute, ramen shops don't serve bread and butter! 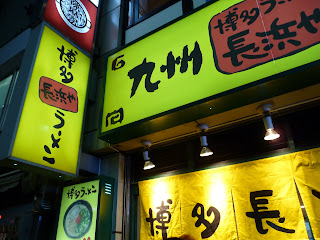 The crew slid inside, punched in at a reasonable 500 yen a pop, and plopped down on our stools to survey the scene. All signs point to the fact that Nagahama-ya is a shop catering to Hakata newbies; par exemplar, notices posted explaining the "kaedama" (extra noodle helping) system, which is pretty standard knowledge to anyone who has eaten Hakata ramen more than twice. Furthermore, advertising Kyushu Hakata Nagahama Tonkotsu Ramen is a bit of overkill - basically what that amounts to is writing Tonkotsu Tonkotsu Tonkotsu Tonkotsu ramen, as any one of the above should tip off even the casual ramen fan as to what is on offer inside. 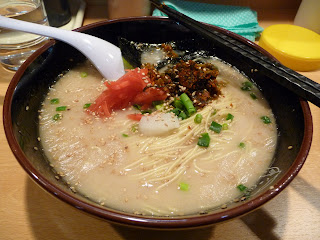 The bowl looked like most standard bowls of Hakata ramen do - thin noodles (though perhaps not quite as uber-thin as some shops around town), creamy whitish brown soup, and free access to all the necessary trappings. Sesame seeds, red beni shôga (pickled ginger), pressed garlic, and spicy takana (mustard greens) make for a properly tricked out bowl. However, by the time I had finished loading up with toppings, a thin film had started to congeal on top of the soup. Umm, that shouldn't be there. My friend's wife (another ramen maniac) and I exchanged worried glances. Maybe it was the cold wind blowing in? Not the most pleasant sight to see before getting down to slurping. 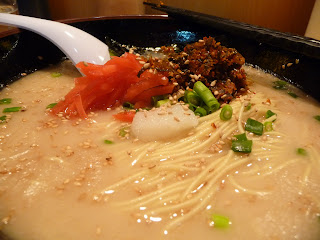 The soup was fine, if not really anything special. The soup seemed a bit thin and a bit weak on the taste axis; toppings, while in order, didn't really stand out, and didn't really blend together to create that wonderful amalgam of ginger, garlic, sesame, pork, and spice that the best Hakata ramen bowls bring. 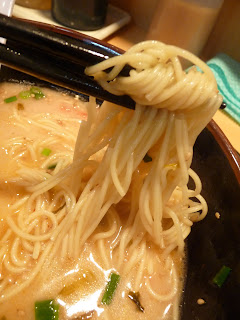 The noodles were a bit soft as well - we noticed too late the sign on the wall detailing the full spectrum of Kyushu-style firmness to which noodles can be boiled, running all the way from "soft" yawame to kona otoshi (with the flour knocked off), in which the noodles are dipped into boiling water for a mere three seconds. So, while we had to place some of the blame on ourselves, the default firmness should have been a bit more al dente.

When I got home and did a bit of googling, I wasn't surprised to find that Nagahama-ya is a franchise shop. In fact, it's the kind of shop whose homepage consists primarily of franchise information. Rather than an intriguing history of ramen master cooks and secret soup transmissions, I got a spreadsheet of how many bowls have to be turned during peak hours in order to break even or make a profit. Not so appetizing.

Nagahama-ya is another chain throwing its hat in the Hakata ramen game, with about a half-dozen franchises scattered around west-central Tokyo. Basically, Nagahama-ya is ramen as fast food. I mean, it's even got the bright yellow and red sign that is scientifically proven to stimulate the appetite right? But you know what? That's fine. Nagahama-ya isn't going to be blowing any minds or tongues, but it's never a bad thing to have another purveyor of Kyushu ramen around, especially in a place like Shinjuku. Though it was one of the weaker Hakata ramen bowls I've had, Nagahama-ya serves its purpose well - to allow drunk people (like us) to eat a cheap bowl of ramen on the way to the train station from the Skatepark / Bar / Art Gallery / Minimall / Suicidal Tendencies Toddler Clothes Store. Word up.
Posted by Nate at 6:05 AM