Today I was meeting a friend in Shibuya, so I decided to pop into Keika and see what it was all about. Keika is a medium-sized chain of Kumamoto-style ramen shops noteworthy for being one of the first shops to bring Kyushu-style tonkotsu (pork bone) ramen to the Tokyo area. Tonkotsu ramen became a big deal in Tokyo and Eastern Japan in the early 1980s after the arrival of shops like Nandenkanden and Kyushu Jangara, both of which still command loyal devotees to this day and both of which have branches all over the metropolis. But Keika has them both beat in terms of age, arriving on the scene way back in the late 1960s. 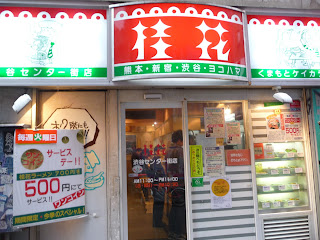 Beginning way back in Kumamoto in far southwestern Japan in 1955 and growing from there, Keika is a chain, but one with a long history. Keika has probably been one of the most well-known ramen chains in Tokyo for decades, way before the idea of "ramen dining" was even swimming around in its fathers balls. It's not trendy or sexy or new wave, but it is regarded for rocking the same style unshakingly for over a generation. They've got locations near all the major stations (Shinjuku, Shibuya, Ikebukuro, Tokyo), and even post ads in some of the subways. 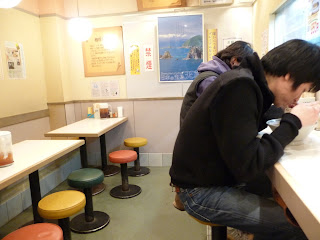 But Keika hasn't let its fame go to its head. Inside the shop is no-frills old school ramen joint for the people, with white counters, white walls, and a little bit of grub (but just a little) around the edges, in a good way. In addition to the counter (separated by glass from the cooks), there are a couple of tables, and a second-floor seating area all packed into a tiny wedge a few minutes walk down Center-gai from Shibuya station. 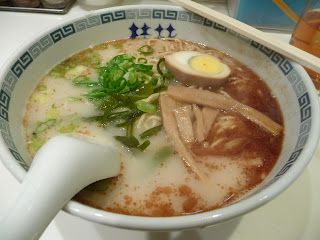 I ordered the basic Keika Ramen, which was placed out in front of me in just a matter of minutes. While waiting, I read over the plaques on the wall explaining that Keika's broth uses absolutely no miso or shôyû (soy sauce) whatsoever, meaning that they stick to the pork bones that are the base of Kyushu-style ramen. Some Kumamoto-style shops use chicken stock as well, but I'm not sure about Keika. A first sip revealed a broth a bit saltier and a bit less "creamy" than your average Hakata tonkotsu, and one definitely old-school and no-frills in flavor; in other words, the taste matches the interior - you see what you get, a bit rough around the edges, but homey. Definitely not the rich broth of an Ippûdô. 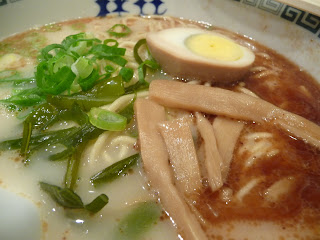 On top was a thin layer of brown mâyû, burnt garlic oil, which again, was not quite as thick or rich (or black in color) as a lot of other Kyushu-style joints around town. My understanding was that kikurage (woodear mushrooms) were de rigeur in Kumamoto ramen, but they were nowhere to be found, instead replaced with thin but chunky slivers of seaweed. The half-egg is nice, but I have to say I prefer soft-boiled hanjuku eggs rather than the fully-boiled egg that Keika dishes out. Again, old-school - you think they bothered only boiling eggs halfway in 1955? As for the shinachiku / menma (pickled bamboo shoots), I hate to say it, but they were a bit tinny and vinegary and below average. 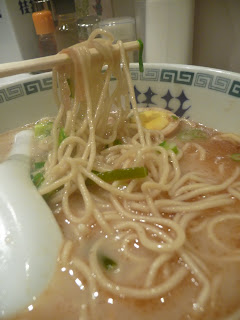 Another tip-off that Keika serves Kumamoto-style and not Hakata-style ramen was the thickness of the noodles - you'd never catch a Hakata place serving noodles this thick, but I dug 'em. It's nice to mix it up with some fatter noodles in Kyushu ramen every once and a while instead of the usual angel hair. I got down to slurping pretty fast, and Keika made for a decent lunch, but in the end I was a bit disappointed. I had high hopes for Keika, but I think in the end, their bowl reminded me a bit more of world-wide chain and Kumamoto ramen purveyor Ajisen than anything else, which isn't necessarily a good thing. There's a sign inside saying that you need to eat Keika three times before you come to like it, since the taste is so strong, but for me it wasn't strong so much as just a bit too salty. I think for Kumamoto ramen I'm gonna go back to the drawing board, or maybe just stick with Higo Noren in Shinjuku. 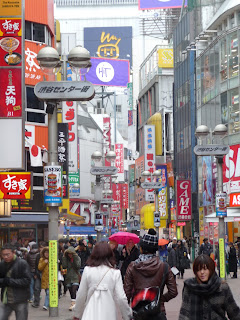 I stepped out into the clusterfuck that is central Shibuya, it occurred to me what a remarkable holdover from another age of ramen Keika is. I wanted to like it more, but as a 21st century boy, it just didn't quite match what I've come to look for in a bowl of ramen. I hope Keika sticks around for another 50 years, but I don't think I'll become a regular anytime soon.
Posted by Nate at 1:31 AM

Your blog is amazing! I'm blogging Waseda, too, but this is way better put together. Keep it coming!

Rad, thanks, glad you like it! I figured there must be some other students at Waseda who were interested in ramen. I don't plan on stopping eating noodles any time soon, so keep checking back for more new posts!

Speaking of Ajisen Ramen, have you had the chance to try it in its supposed birthplace (Japan)? I'm really curious to know if it's any good over there? According to their website, http://www.aji1000.co.jp/shopinfo/japan.php?txt_TihouName=%8A%D6%93%8C#%E6%9D%B1%E4%BA%AC%E9%83%BD, they have five stores in the Tokyo area.

i haven't ever had a chance to try ajisen in japan. i think it has a pretty legit background as just a small mom and pop shop in kyushu that just kept growing and growing and growing... i've heard that the original location is pretty tasty, and different from the rest. as for the tokyo shops, i'm guessing that the quality is higher than at the overseas locations, but it's still not at the top of my list to try.

Thanks for sharing the good and useful information here on the blog for us.
obat aborsi
tanda tanda kehamilan