I wasn't planning to eat ramen today. Honestly, I wasn't. My body was still feeling the after effects of all that spicy soup slurping at Nakamoto, and I was planning on taking a day off from noodling. But sure enough, this afternoon I found myself back at the bowl, back in none other than Ikebukuro. (Sans camera, hence the cellphone pics).

How did this happen? I had shipped out for Junkudô, one of the biggest and best bookstores in the country, to pick up some paperbacks I needed for research. I found what I needed and was on my way out when I spied this: 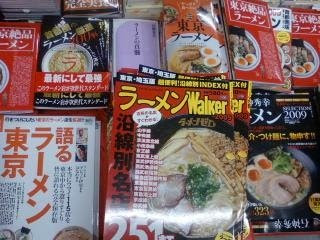 A full table loaded down with literally dozens of ramen-related publications, from tracts by famous ramen writers to an array of guidebooks spanning every nook and cranny of a very generously-defined Tokyo metropolitan region. I toyed with buying a few, but in the end decided to spend sometime engaging in the national pastime of tachiyomi (reading while standing), using my cellphone camera to snap pics of listings of interesting looking stores. The whole spectrum was on display, from nearly-exhaustive guides like "Ultimate Ramen" to glossy, high-design magazines clearly targeting the "well-to-do-man-about-town" demographic. There were guides highlighting the newest trends, guides listing the oldest stores, guides divided by soup type, guides divided by location, and more. 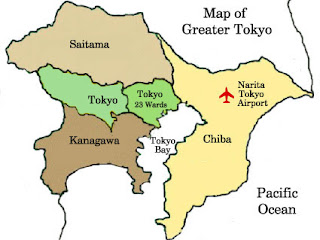 I spent 20 or 30 minutes flipping around and taking notes (you need good research to find good ramen!), and added a couple tasty-looking shops to my list, including a shop that dates back 90 years, a couple more "black miso" bowls, and a few more promising contenders for title of best bowl of Hakata ramen. In overall trends, blended seafood stock gyôkai broth seems to be maintaining its hold on center court, but I saw a few features proclaiming 2009 to be the year of the great miso ramen comeback. Geographically, the hot new ramen zone is the somewhat unlikely Saitama prefecture (perhaps best described as "Tokyo's North Jersey"), centered on the Omiya area. Takadanobaba scored plenty of coverage, with Watanabe (which I didn't care for) almost universally adored, and Sapporo Junren (which I haven't yet visited) pulling some weight in the miso division. 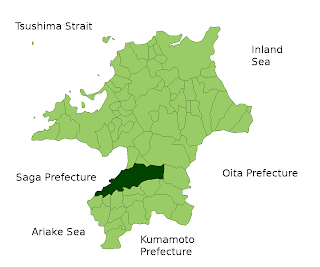 One of the more exciting discoveries was the recently opened outpost of a Kurume-based chain shop inside the Ikebukuro Station complex Tôbû department store. As described in my earlier post on Kinmaru in Ginza, Kurume (highlighted in the above map of Fukuoka prefecture in Kyushu, across the strait from Korea) is the alleged birthplace of Kyushu-style ramen, featuring an old school, gritty, rich tonkotsu broth. For the full story read the Kinmaru post, or better yet, check out Rameniac's article here. Kinmaru was good, but the temptation of a branch store of a Kurume-based shop in the very building in which I was about to hop my train home was too good of an opportunity to pass up. 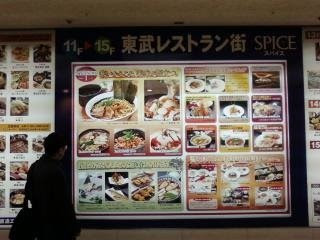 In the food court of a department store may not be the most auspicious location for good ramen-eating, but Tôbû Spice is no ordinary food court - it's a clusterfuck of 55 restaurants spread over a full five floors. I took the express elevator that goes straight from the subway wicket to the mall (natch), and was soon navigating wide (and empty at 4 PM) hallways filled with displays of plastic food. 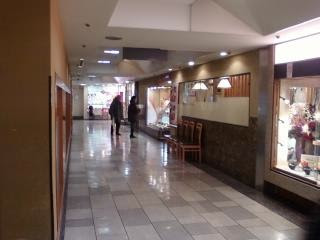 It seems like Tatsunoya's space in the restaurant area is reserved for "visiting" ramen shops from around the country, so it's unclear how permanent (or impermanent) of an phenomenon Tatsunoya's presence is in Ikebukuro, so it's worth getting while the getting is good. 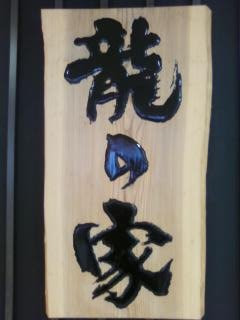 Tatsunoya (The Dragon's House) was started about 10 years ago by a salaryman from Kurume who decided to throw it all away and start a new life as a ramen shop master. Given how much being a salaryman sucks, I'm surprised this doesn't happen more often. Tatsunoya's head cook grew up in Kurume, where "ramen is a part of everyday life;" he cut his teeth working at Ippûdô before going into business for himself, and claims to have spent three years sleeping in the shop and developing his own blend that draws on both traditional Hakata and Kurume styles. Now Tatsunoya has a smattering branches in Kurume and in Kumamoto prefecture, as well as this sole Tokyo outpost. The master's work was not in vain, because Tatsunoya's ramen was the blom shiggety. 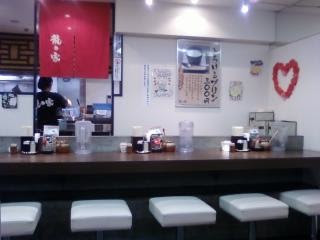 Stepping inside, Tatsunoya Ikebukuro is somewhere between typical countryside ramen shop and department store restaurant. It's spacious but no frills and there are more tables than counter space, with soft jazz tinkling on the stereo. Almost everyone working seemed to be under 30 and happily joking around; the customers however, were very atypical for a ramen shop - mostly solo older women in their 50s and 60s taking breaks from shopping. So that's what the obâchans (grannies) eat when they think no one is looking! 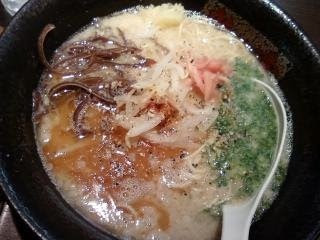 There are essentially only two items on offer - thin-soup assari tonkotsu ramen and thick-soup kokuaji tonkotsu ramen. I went with the thick, and, figuring I'd probably go in for a kaedama (extra helping of noodles), fought the desire to submit to the temptations of a bowl of rice heaped with spicy takana greens. "Thick" meant more than a fair share of suspended fat floating in the soup, and the first sip revealed a rich, deep, porky, and ever so slightly sweet taste. This was going to be a very good bowl. I had just been thinking that I was in the mood for a bowl of Kyushu ramen, so Tatsunoya arrived at the perfect time. 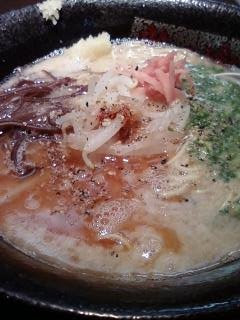 The bowl was fully decked out with all the proper toppings - kikurage (wood ears), thin cut green onions, a somewhat atypical (though not unheard of) smattering of bean sprouts, with a jar of pickled red ginger and a black and white sesame grinder tableside. Laid across one-third of the top of the soup was a thin reddish-brown oil distinct from the more common black mâyû (burnt garlic oil) served at some high-end Hakata places. The website describes touches of Chinese sesame oil and spicy miso in the soup, so maybe it was that? I noted the sign of a cartoon character advertising fresh garlic upon request, and a waitress hurried over to my table to squeeze a clove straight into my bowl. 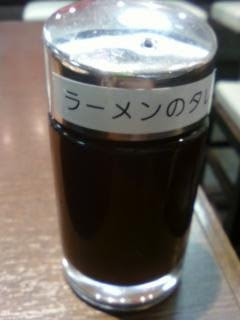 Another somewhat unusual tableside addition was a small container of ramen no tare - additional flavor essence of the kind usually added to the soup before serving. I tried a splash, but it made things a bit too salty even for my taste - I'm guessing that shôyû figures in heavily in the tare in a nod to Kurume tradition. 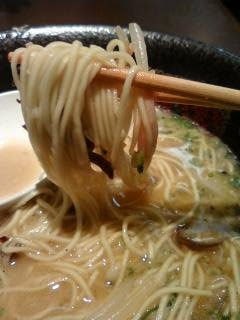 I ordered my noodles katame (al dente), which is only about halfway up the totem pole of firmness at a Kyushu-style joint like Kurume. Tatsunoya has their own noodle factory in Kurume and all the noodles in the Ikebukuro shop are shipped in from there, and definitely better than average. One negative was that Tatsunoya's noodles were a bit overpriced at 780 yen - Kyushu ramen tends to be served in smaller portions but with cheaper prices, due to the expectation that many customers will order an extra helping of noodles after the first. Tatsunoya's was a bit steep for the portion, but every department store restaurant is marked up a bit, so I suppose it can't be helped. Nonetheless, I went in for a kaedama, and was pleasantly surprised when the waitress offered me a free serving of the house made pudding, since I had ordered no roast pork in my soup. Uh, yes please! 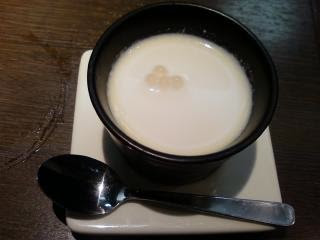 The pudding was at least as good as the ramen, and that's saying something. Combine heavy cream, coconut milk, and tapioca and it's hard to go wrong. It was melty and runny in the best possible way, not at all gel-like. I scraped every last bit off the wall of the bowl and savored the taste all the way back to the elevator. If you're ever looking for good eats in the catacombs of 'Bukuro station, Tatsunoya gets a big thumbs up.
Posted by Nate at 3:51 AM

Independent Escorts in Dubai is the right decision. the top Dubai Escorts at your one Click. Log on to us for entertainment.

ij.start.canon/setup is the easiest way to setup Canon printer to your system. A device and internet connection are basic requirements for making connectivity Canon ij printer setup with computer system or phone.

How to download and install hp drivers from 123.hp.com/setup? You can download hp assistance to auto update drivers without any hadic

Go to microsoft 365 setup, then log in to your MS account. Next, type in the product key and download the application. Microsoft 365 is the most convenient method to acquire all Office software applications in a single subscription.