I had probably the worst hangover of my life today. Burmese food, shôchû (distilled barley liquor), and antibiotics proved to be a terrible combination. I spent the lion's share of the day drinking vitamin drinks and eating meals in liquid form - fruit gels and corn soup. I eventually started feeling a bit better, and when the clock struck 10 PM I suddenly found myself ravishingly hungry. Given the circumstances, I figured Asahi would be a perfect choice - it had opened only a month ago just west of the Babakuchi intersection, and advertised itself as umai! yasui! hayai! (Delicious! Cheap! Fast!) It advertised noodles from a mere 320 yen up, so it looked to be a "discount ramen" place, a kind of equivalent to the Fuji Soba shops that seem to be everywhere, serving mediocre but totally passable bowls of noodles to nondiscriminating passerby everywhere. I figured that I could only trust myself to keep down about 320 yen's worth of food, and thought I'd rather get Asahi out of the way at a time like this, rather than waste a good lunch on it when I could be eating something better. 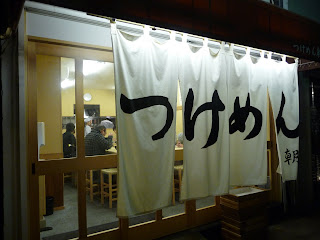 Everything at Asahi is stripped down and made as simple as possible, from the ticket machine to the store interior to the noodles themselves. There are columns for tsukemen, tsukemen with egg, tsukemen with vegetables, and tsukemen with pork, with each ascending in price and volume as you descend the column. Sure enough, the basic noodles clocked in at a mere 320 yen, the cheapest I had seen since eating a very, very terrible 100 yen bowl of ramen in Kyoto six years ago. The next size up, the chû, (medium) gives you 300 grams of noodles for 420 yen, definitely a lot of bang for your buck, at least in terms of sheer volume. Getting larger, 600 grams of noodles is no small amount. 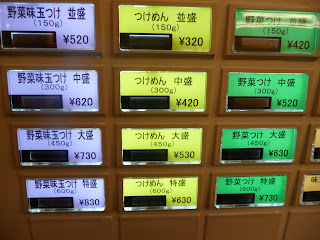 Inside, there was one cook in the kitchen in back, one young woman taking order tickets, and a solid smattering of drunkish, largeish men sitting around the U-shaped counter. I guess I wasn't the only one to have the idea to use a serving of tsukemen to absorb extra alcohol in the old gut. Being mostly noodles rather than soup, tsukemen give you the calories you need without making you worry about having to pee on the long train ride home to the suburbs. 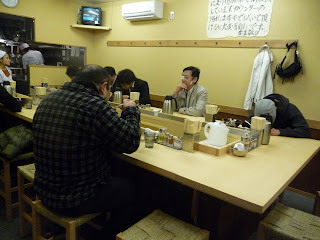 Yes, that guy in the hat is passed out sitting up. After taking a seat, I realized that Asahi did in fact offer ramen, but almost as an afterthought - at the very bottom of the ticket machine, almost unnoticeable were the options for tonkotsu shôyû or tonkotsu katsuo (blended fish stock) for 700 yen, though I'm guessing they don't get many orders for those. 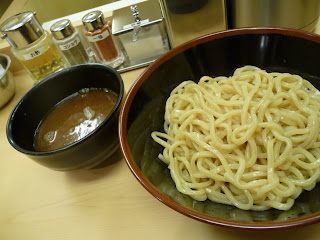 When the noodles came, they were predictably bare bones - thick darkish noodles and a smaller than average bowl of dipping tsuyu that from the look and smell of it had a bit of fish stock blended in. Not even a few token slivers of onions as garnish. No wonder the waitress looked at me quizzically when I asked for no pork - you've got to pay extra for it, the same way you do for seaweed or eggs. I guess that's one of the ways that Asahi cuts costs to be able to offer such cheap noodles. 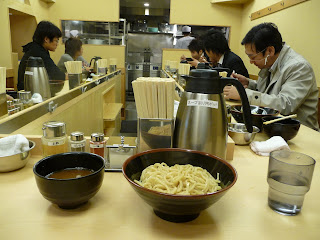 Asahi's noodles were surprisingly decent. Sure they were lukewarm, and sure the soup needed a couple dashes of pepper, but they were properly mochi mochi (chewy) and went down easy, especially at that price. I don't see myself coming back here anytime soon, at least not unless I have to nurse an equally bad hangover, but Asahi definitely didn't suck. It seems to be crowded at all hours of the day, and I can see why - it's not easy to get lunch for four bucks in this day and age, and it's at least marginally better than eating at the convenience store. Taking notice of the sign asking you to wipe the counter after yourself to help them cut staff costs and keep prices down, I did just that and stepped out into the night, duly satiated.
Posted by Nate at 6:42 AM