A few posts back, I described my visit to the Takadanobaba shop Nagahama Ramen Botan by comparing it to my memories of my favorite Hakata ramen haunt in Kyoto, Miyoshi. I was back in Kyoto this past weekend, and decided that I needed to see how Nagahama Ramen Miyoshi itself stood up to my memory of Nagahama Ramen Miyoshi. I had heard from a pal that Miyoshi was no longer extant, but I figured I had better check for myself. I only learned that the ramen shop in question was called Miyoshi a few weeks ago - when I actually lived in Kyoto I and everyone I knew just referred to it as "that smelly ramen place" or "stinky ramen." Certainly, Miyoshi is where I learned to identify that unmistakable tonkotsu aroma, as well as where I developed my taste for the stringy white stuff. Many bowls of Miyoshi's ramen were consumed in a haze (albeit a delicious one) on the way home from a night out on the town. 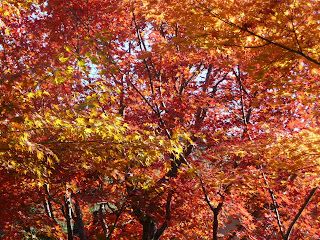 I spent a couple days visiting old friends and teachers and checking out the autumn colors, but I was hoping to find a chance to sneak in a bowl of Miyoshi ramen before leaving. The friend I was staying with hadn't been to a ramen shop in years, so needless to say, a place like Miyoshi was completely out of the question. Miyoshi (it still feels somehow strange and wrong that it has an actual name) is the kind of place a ramen novice wouldn't touch with a ten foot pole - tiny, grungy, smelly, and pulling no punches. We did a bit of shopping in the area during the afternoon and I took a minute to confirm the shop's existence - my friend who told me it was gone must have gotten lost or misremembered the location, since Miyoshi hadn't changed an iota since I last ate there two and a half years ago. I snapped a quick picture and gazed longingly, promising myself that I would be back in a few months. 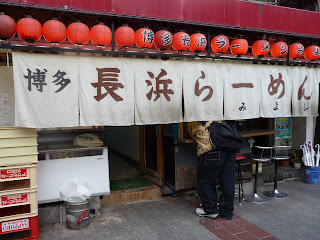 However, later that evening I found myself alone and with about an hour to kill before meeting my old host family for dinner. Miyoshi was only a couple of blocks away. I was at an impasse - on one hand, I was about to have my old host mother serve me a home cooked traditional meal; on the other hand, I REALLY wanted to eat this ramen. I HAD to eat this ramen. How could I even pretend to take writing about my noodle experiences seriously if I passed on such a perfect chance to revisit the place where the obsession started? I walked by once, paused, considered. I walked by again, paused, reconsidered. The jury was still out. "Fuck it," I thought, "this is asinine. I should just eat the ramen and I'll still have room for dinner. After all, it's Hakata style, so the initial serving won't be too big." I lifted the curtain and went in. 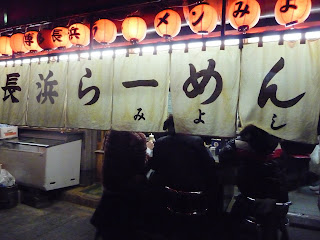 One of Miyoshi's "charm points" is the fact that it's open to the street and so bridges the gap between streetside yatai stand and "proper" ramen shop. Besides the counter, there's a small table on the sidewalk and separated from the street only by the shop curtain, and the cold Kyoto night air blowing in somehow enhances the whole experience of slurping down liquid pig and noodles. Come to think of it, the fact that the storefront was open is probably why the smell of the boiling soup always wafted all the way to the main intersection, and probably has something to do with how Miyoshi became so infamous. Being right on the corner of Kiyamachi-dôri, Kyoto's main drinking and nightlife street, I would guess that nary a patron of the nearby bars hasn't at least considered stopping in.

I plopped down on one of the tiny stools and put in my order. Sadly, they were out of kimchi, so I made do with the basic - upon further reflection, it's surprising that more Hakata style joints don't offer the spicy Korean cabbage, considering Kyushu's proximity to the peninsula. To the front of me were three blue clad cooks scuttering around the tiny corner of a cooking area, to either side were dudes my own age slurping down their bowls with a velocity considerably higher than what I can manage. No doubt they've been eating Miyoshi since they were students as well.

But right in front of me, at eye level, were Miyoshi's other charm point - the incredible variety of toppings available for free. All Hakata ramen (at least all Hakata ramen worth its pork fat) has basic toppings like beni shôga (red pickled ginger) and sesame on offer, but Miyoshi really goes all out - there are at least a full half-dozen jars lined up on the counter, holding shôga, sesame seeds, spicy takana greens, dried chili flakes, something akin to korean spicy bean paste, and the secret weapon...rice krispies. I've never seen this topping at any other shop, and it's definitely an extra something special - they start out as a nice crunchy counterbalance and after getting soggy give the soup a bit more weight. 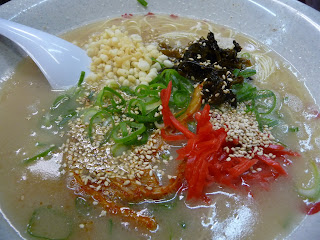 My bowl came up fast, the same old light gray color, the same old ultra-wide flat rim that made it easy to pass over the high counter without burning ones hands. I took my time carefully placing on every topping, savoring the composition of the fully-realized bowl of Hakata ramen. One other extra topping added behind the counter are spicy pickled bamboo shoots - between this, the spicy bean paste, the kimchi option, and one of the cooks' accent, I wondered if there might be a Korean connection at Miyoshi.

So, how did it stack up? Miyoshi is still delicious, and still hits the spot just like always. It wasn't quite as brutally porky or stinky as I remember it being, but that's probably because I have a much broader standard of comparison than I did back when I lived in Kyoto. The broth is a bit thinner than some Hakata ramen shops and not overly creamy (like say Ippûdô), but is basic, balanced, and perfectly polished in an entirely unpolished way. The noodles might be just a tad thicker than some other Hakata places, but are basically the industry standard thin white strands.

I swirled my noodles around, thinking about my life the first time I ate Miyoshi and my life now. I ate slowly, trying to get just the right mix of green onion, red ginger, and white sesame in each bite between glances around the store. I would say I remembered lots of old memories from eating at Miyoshi in the old days, but the truth is I don't - I was usually drunkenly wolfing noodles down before shuffling out to let the next cold and drunk 20-something guy in to take my spot to wolf down his noodles. Which is as it should be. I knew an asshole who said that the reason he wouldn't eat at Miyoshi was because "they cooked the food with the same hands they used to handle the money." That guy was an idiot. I wouldn't have it any other way.

I read recently that Miyoshi had opened up a branch store in Shinjuku, but that it had closed. Despite the oddity of the name "Kyoto Nagahama Ramen Miyoshi Shinjuku," the Tokyo outlet apparently commanded quite a following of celebrities, including this chucklehead: 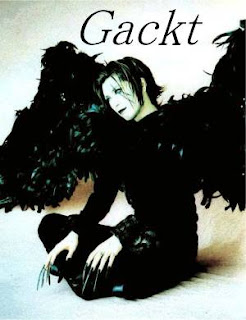 Although I'm no Gackt fan, I have to tip my hat to him for having good taste in ramen. And, while I'm a bit disappointed that there's no Miyoshi a ten-minute bike ride from my current place of residence, in the end maybe that's how it should be. A place like Miyoshi isn't a place for celebrities and their fans to queue up, it's a place for broke students and salarymen to get their fix. Even if Miyoshi may not be the end-all be-all of tonkotsu, I will always love it and it will always have a special place in my heart and in my personal noodle history. 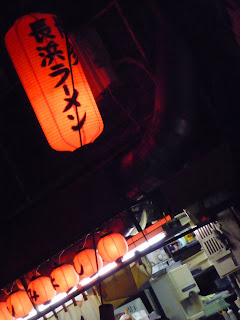