OK, so Nong Inlay is not, strictly speaking, a ramen shop by any stretch of the imagination. But Nong Inlay is one of my very favorite restaurants in the vicinity of Takadanobaba, and they serve a mean bowl of noodles, so I wanted to include it on the list. One of my first days in Takadanobaba, I was walking down the street home from the station and noticed a restaurant advertising Myanmar food. I was a bit surprised, since, although Thai restaurants and Vietnamese restaurants are common enough in the United States and certainly not uncommon in Japan, restaurants serving Myanmar cuisine are few and far between. A quick google search turned up some surprising results - it turns out the area around Takadanobaba station is one of the areas in Japan with the highest concentrations of immigrants from Myanmar. 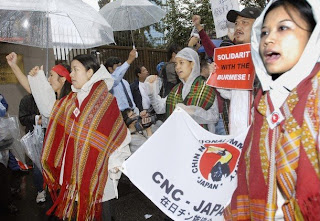 I would say a veritable "Little Yangon," but that would mask an important distinction - that between "Myanmar" and "Burmese." Although most people in the English-speaking world often still refer to the country as Burma, the word "Burmese" is challenging, since though it can refer to someone from the nation formerly known as Burma, it also can be used to refer to the Bamar people, who are the dominant ethnic group in Myanmar. Thus, to call a person (or here a restaurant) "Burmese" runs the risk of offense, since there is a not insignificant chance that the person being referred to may be from Myanmar but not "Burmese" (that is to say not of the Bamar ethnic group). This is especially true in places like Japan since so many overseas refugees from Myanmar are from the countryside, rather than the largest city of Yangon. Just to make matters more confusing, the adjectival form of "Myanmar" is also "Myanmar" (rather than, say, Myanmarese). 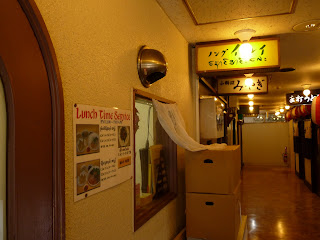 In any case, there are a number of restaurants, shops, and pubs in Takadanobaba run by immigrants from Myanmar. The most well-known (and the one whose sign I noticed on the street) is Mingalaba, a large restaurant with a nice lunch special and a tasty full menu. It seems like it can get rowdy at night, based on the size of the karaoke machine at the front of the restaurant. Mingalaba is also noteworthy for their rendition of Lephet Thoke, a salad of cooked tea leaves and crunchy nuts that was not only delicious, but also turned out to be a powerful stimulant that made my heart race until 5 AM. (Tea salad photo, protest photo, and traditional garb photo borrowed from the web). 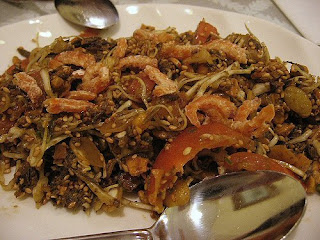 If I had to guess, I would say that Mingalaba (which seems to mean something akin to "Cheers") is probably run by Burmese (Bamar) people, but the proprietors of Nong Inlay make it very clear that they are not Burmese. The sign features the green, red, yellow, and white flag of the Shan people, and the sign and menu advertise "Shan cuisine." Shan people live across northern Myanmar, Thailand, and Southwestern China, and are most concentrated Shan State, which constitutes a large hunk of Northeastern Myanmar along the Thai border. The Shan have been fighting a protracted civil war against the junta for decades, and as a result, many people have been driven to flee to Thailand or further abroad to places like Japan. If you've seen Rambo 4, those were Karen rebels and not Shan rebels, but it might give you an idea of the situation in that part of the world. Sort of. Or not. 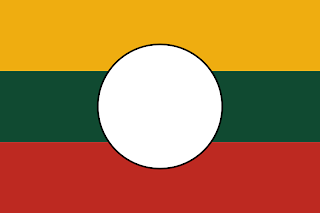 To be honest, I'm not really sure what the stories are of most people from Myanmar who are living in Japan. I've seen people who are definitely construction workers and I've seen people who are definitely businessmen, but I'm not sure if most people come here seeking political asylum, on visas from the government, or what, though I would guess that people in the latter category are probably not frequent visitors to Nong Inlay, considering the fact that inside the restaurant there are images of growling tigers overlaid onto Shan flags and occasional fliers asking for donations to resist the junta. 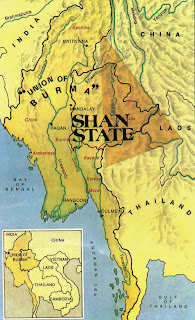 Just as most people probably couldn't point out Shan State on a map of the world, Nong Inlay is not the easiest restaurant to find. It's on the back corner of the building between the two sets of elevated tracks just across the street from the station, behind the Astro Boy mural. The only indication is a tiny sign with the Shan flag mixed amongst the jumble of other restaurant and bar logos. The restaurant itself is tiny, with only about 8 seats total, though I'm willing to bet that more squeeze in sometimes. There seem to be a rotating roster of women acting as waitresses and assistants, but I think it's been the same older man working the stove in back every time I've been in. 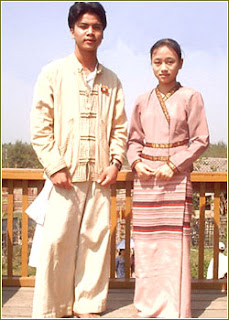 At 800 yen, Nong Inlay's lunch special is truly a killer deal - you get a choice of noodles, rice, spicy pickled vegetables, a thin and peppery chicken soup, fried tofu with dipping sauce, plus tea and a rotation of coconut milk-based desserts. The clientele seems to be half Myanmar people and half Japanese businessmen and construction workers who have gotten wise to the lunch deal. There's a full menu available, including a few specials written up on a white board, (some translated, some not), but so far I've only tried the lunch menu. 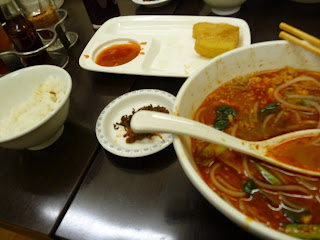 There are two kinds of noodles, both of which are available with or without soup. There's something called "Shan Soba", as well as something that approximates to "Mi She", which are thick rice noodles, so I wonder if the pronunciation might be borrowed from the Chinese "mixian." So far, I've only tried the Mi She, since that was the one with the chili pepper next to it on the menu - interestingly, the menu also marks which dishes have cilantro, since for whatever reason cilantro is one of the few foods that most Japanese people can't bring themselves to eat. The soup is spicy and complex, not entirely unlike the more famous Thai soups, with some lemongrass and similar flavors. There's also some ground chicken which seems to be a mandatory part of the dish, which I end up just picking around. The noodles are just as good without soup, resembling Japanese "abura soba" (oil noodles) topped with tons of ground sesame, ground peanuts, cilantro, and several kinds of different chili oil. Just in case that's not enough for your tastebuds, there is a small caddy on each table with a selection of four MORE kinds of chilis - pickled peppers in vinegar, dried pepper flakes, a chunky sauce resembling Chinese lajiang, and a thinner red oil. "Not too spicy for you?" I was asked on my last visit.

It's definitely easier to get spicier food in Japan than it was a few years ago, but all too often "spicy" dishes are merely hot without much flavor, and the heat ends up masking the taste of the food rather than enhancing it, probably because pepper oil is added at the last minute to adjust the heat level to the customers taste, rather than cooked together with the food. Nothing could be further from the case at Nong Inlay - their noodles are flavorful as hell and pack a serious punch to the mouth and tongue, enough to make me cough a bit when ordered "regular spicy." I'm willing to bet that if pressed they could probably serve up one of the spicier things I've eaten in a while. My pal who has spent some time travelling in Myanmar (and literally wrote the guidebook on it) tells me that Shan noodles are not unreknowned for their deliciousness and clock in higher on the tasty scale than mainstream Burmese cuisine. There's a kind of weirdly propagandistic video about Shan noodles here:
http://www.ifood.tv/recipe/shan_noodle 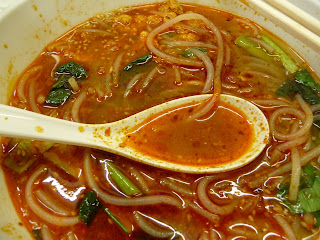 The food at Nong Inlay is a mix of powerful flavors that are all just a bit different from anything I've tasted anywhere else. Even if it weren't for the amazing lunch deal, I would keep coming back just for the bomb-ass noodles. As I sat there wiping chili sweat from my brown and listening to the elevated trains rumble overhead, it occurred to me that Nong Inlay deserves the highest complement that I can give any restaurant - eating there makes me feel like I'm in Queens.
Posted by Nate at 1:21 AM