I was in the mood for something basic and satisfying with thick noodles, and it was a sunny clear day, so I decided to bike over to the other side of the station to hit up Kômen. Kômen is a decent sized local chain, with 12 or so outlets around town, mostly located within spitting distance of major train stations, but for whatever reason, this was my first visit to one. 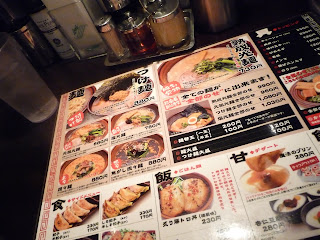 With a large laminated menu chock full of jazzy photos and organized for easy understanding, Kômen definitely falls into the category of ramen shops trying to simplify the ramen experience and attract "general" customers who want noodles without the stress. They have all major varietals on offer, including shio, tonkotsu, shôyû, miso, and two different kinds of tantanmen. Each can be fully customized with an extensive array of all the standard toppings, and interestingly each type of ramen comes with its own kind of noodles - extra thick for dipping tsukemen, medium thick for tonkotsu, thin for shio, and so on. There are also several different kinds of gyôza and a few other standard rice dishes available 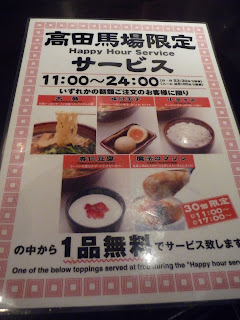 One nice touch is their "service time" promotion in which you can take your pick for free between an upgrade to extra noodles, a boiled egg (ajitama), a small bowl of rice, Chinese-style almond pudding (annin dôfû), or the house special pudding. I went with the egg, but it seems like the dessert options are the most bang for your buck, since they usually clock in at 280 yen a pop. The house pudding must be really popular, since they only make 30 a time at certain set intervals during the day and are also available for take out. Maybe next time. With a "lunch service" so generous and so long that it encompasses almost the entire day (11:00 to Midnight!), Kômen is definitely aiming to please the customer. 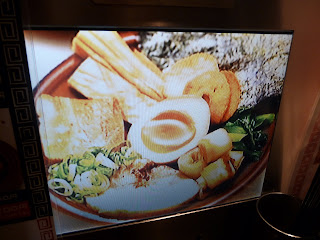 One interesting facet that sets Kômen apart from its competitors are the small flat screen monitors installed at regular intervals on the counter. I'm not really sure what the point of these is other than to make the store feel snazzy - why do I need to see video of the inside of the store I am currently in, or video of the noodles I am currently eating? They also rotated some music countdowns, but since there's no sound, I'm not sure what purpose these monitors serve. Oh well. 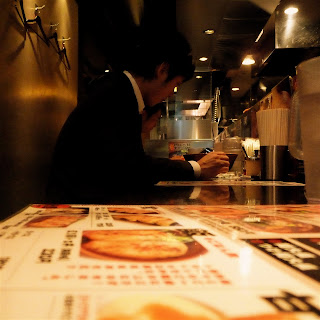 After a brief deliberation, I decided on the tonkotsu - since it wasn't aspiring to be Hakata-style, it might not be half bad, and at a place without a single specialty, I'd rather have a mediocre tonkotsu than a mediocre shio or shôyû. Kômen seems to take the Chinese connection a little bit more seriously than the average ramen shop, between the two kinds of tantanmen, the telling presence of gooey "XO" sauce added to the shio ramen, the almond tofu, and the undertitle honkaku chûkamen (Real Chinese Noodles) on the logo. 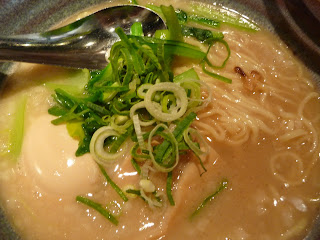 When the noodles arrived, they were pretty much what I had expected - standard in every way. Not too thick, not too thin, not too porky, not too salty, just a little bit of suspended fat, all the regular toppings, though with a few extra Chinese greens. The soup tasted like what you would imagine a bowl of ramen to taste like, almost reminding me in a way of some of the better bowls I'd had in the States. This wasn't really any particular "style", just basic ramen. Kômen's ramen (at least their tonkotsu) are Noodles For Everyone, mediated to the common taste. This doesn't mean they were bad, just not that special or memorable compared to so many of the other bowls around. A splash of the tableside diced garlic did help a lot though. 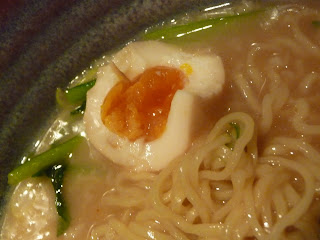 The egg was good, boiled nice and soft in the middle, though still not up to the impossibly high ajitama standard set by Afuri a few weeks back. One nice thing about Kômen, which the Ramen Tokyo blog also points out, is the large glasses of water, a refreshing change from the tiny cups at most places that need constant refilling. As an American, I like to drink a lot of water while I eat, especially if I'm eating something as salty as ramen. In contrast, Japanese people don't often drink very much cold water, or seem to drink much at all during meals. This can be even more true when the meal is soup, since, in Chinese fashion, the soup can itself be considered the beverage.

All in all, Kômen was OK, but not that special, about what I would expect from a moderately high-end fairly large chain. I got a card to collect stamps towards a free bowl, so it seems like they probably get a lot of repeat customers and regulars - I wouldn't be surprised if a lot of people make the various Kômen outlets around town regular stops on their work lunch break rotation. I hear the chili oil is housemade and packs a solid punch, so I'll probably be back to Kômen one more time to try out the black tantanmen, but that will most likely be it. That said, if I find myself out somewhere and am in need of a quick bite, I'd stop in a Kômen again.
Posted by Nate at 5:50 AM