My last couple of posts (and bowls) have all been outside the Waseda / Takadanobaba area, so I thought I should get back to business and cross another shop off the list in my own neck of the woods. I recently discovered the mapping function on the Supleks Ramen Database, and it revealed a whole host of shops in the vicinity that had thus far escaped my attention. It turns out the total number of shops is probably closer to 75 or 80 than to 50. After a few brief moments of panic and self-doubt as to whether I really could eat my way through all those ramen shops, I regained my composure and decided to redouble my efforts. 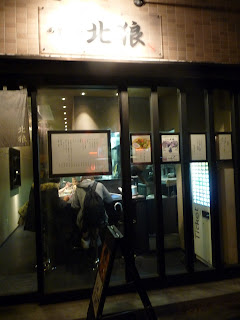 Tonight I was feeling a bit sluggish and didn't want to schlep too far, so I decided to give one of the places closest to home a whirl. Kitarô (The Northern Wolf) is literally just around the corner from my place, but for whatever reason I had never noticed it until just a week or two ago - I chalk it up to it's location on the far side of the crosswalk I always use. I knew nothing about what to expect, and a bit of googling revealed only that they have one other branch in Shingawa and that they have a specialty of something called aemen. I had never heard of aemen before, so I set off no less sure about what kind of ramen I was in for.

Atmosphere-wise, Kitarô falls into that category somewhere between the upscale decor place and the standard shop. No high design concept, but the glass storefront and clean and stylish black counter makes it a ramen shop that's "easy to enter" for the uninitiated, lacking the sometimes intimidating presence of a solid door or noren curtain. Nonetheless, I was still surprised to see two student-esque young girls among the customers - fashionable shop or not, I rarely see girls my age at ramen shops unless they are being dragged in by their boyfriends. This is not to say that there aren't plenty of female ramen freaks (there are), just that the general ramen clientele tends to skew way in the "no ovaries" direction. 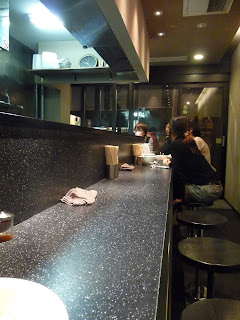 Interestingly, the ticket machine had two separate "menus" - one row for lunchtime, with slightly cheaper prices, and one row for dinner, with a few less options. For lunch there seemed to be a variety of tonkotsu bowls (fish-blended, shôyû-blended), but for dinner only a choice between "ramen" (without a lead-in descriptor) and two kinds of aemen - "spicy red" and "curry yellow." The curry yellow sounded good to me on a cold winter's day, and that was the one that people were talking about on the Supleks database.

When the aemen arrived, it came as a bowl of noodles dusted with brown curry powder and another bowl of a slightly thick, curry-looking (duh) soup. I asked the cook if I should eat it by dipping the noodles like tsukemen, or pour the soup onto the noodles - it seems like this is a common question, because he handed me a laminated explanation sheet describing the proper aemen eating process. Pour the soup over the noodles, mix well, then sip on the last of the soup between bites of noodles, something like a mix between abura soba (oily noodles with no soup) and standard ramen technique. 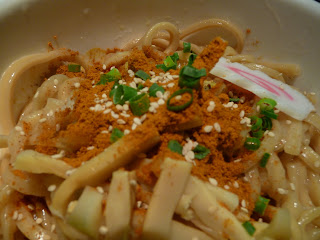 I decided to start by trying a bite of the noodles pre-souping to see how they tasted with just the curry powder and the little bit of oil at the bottom of the bowl. The first thing I noticed were that these were some thick and chewy fucking noodles. Kitarô's noodles might be the thickest and chewiest I've ever eaten, almost more like udon than standard ramen. This is by no means a bad thing. The next thing I noticed was that the curry powder packed a pretty solid punch in the spice department. 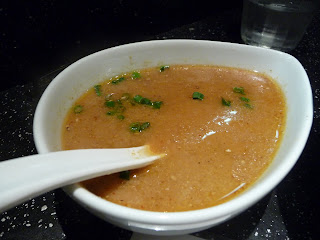 The soup, conveniently served in a bowl that doubled as a pouring utensil, was tasty on its own - certainly way thinner than the heavy goo known as Japanese curry, but still thicker than the standard ramen soup. The spice factor was present in the broth as well, and I felt my nose tingle from the curry particles. I was actually kind of shocked how spicy the dish was, considering that Japanese curry is usually far more sweet than hot, and that the "curry yellow" was contrasted with the "spicy red" on the menu. I'm guessing there are more than a few customers who are caught off-guard, thinking they are ordering the mild dish and getting hit with a tongue-tingling cross-counter punch. As I started eating, I noticed for the first time the presence of slivers of menma, visually almost indistinguishable from the mega-thick noodles. 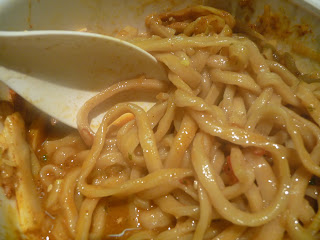 Soup, powder, and noodles blended together was definitely where it's at, with bite after chewy bite of thick, curried goodness. These noodles took a lot longer than the average bowl to prepare (maybe due to the thickness of the noodles?), and they took longer to eat than the average bowl as well. I can see why Kitarô has fans, and I wouldn't be surprised if people come from afar to eat here - the curry aemen is definitely a totally unique bowl of ramen, not quite like any other bowl I've ever eaten. 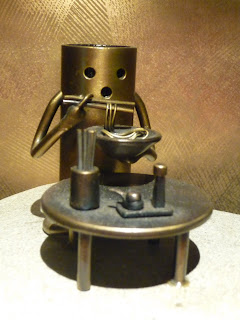 On the way out, I noticed this little bronze figure - it was paired up with another figure cooking the noodles and a third one serving the noodles. Kind of awesome - I wonder if they had it specially made or if these are sold somewhere? I might have to get one, but in the meantime, I think I found my user ID photo. I will definitely be back to Kitarô - not only am I itching to find out just how spicy the "spicy red" is, I'm pretty curious what such an inventive ramen shop does with their "standard ramen." One of my top picks so far.
Posted by Nate at 4:49 AM

Dude, I can't believe you kept this blog secret for so long! It's incredible stuff, friend.

DEMERIN (Umezu's webmaster) keeps a food blog, but she focuses on donburi stuff in kichijoji.

This post especially is driving me crazy, sitting at my desk with a grumbling stomach. So, does aemen always come with curry powder as it's main jibberjabber? It sounds tasty. I was reminded in a weird way by currywurst, the berlin hotdog with catchup and curry powder on top.