(NOTE: this shop is now known as Mitsuyadô Seimen).

As I bike around the neighborhood, Fujiyama probably catches my attention more than any other ramen shop. It's a huge shop, and it's right on the corner of the big intersection of Waseda-dori and Meiji-dori, so I had spent a lot of time wondering about it while I sat waiting for the light to change. There always seemed to be a lot of people filtering in and out, but between the big sign highlighting the presence of tsukemen rather than ramen and the name "Fujiyama," I felt a bit skeptical.

After being a bit let down by Ore no Sora the day before, I wanted to get something simple and satisfying, and Fujiyama turned out to be the perfect choice. Everything at Fujiyama is about satisfying the customer - this is ramen that aims to please everyone, kind of like the anti-Jirô or anti-Ganko. That could be a recipe for disaster, but Fujiyama gets it right. 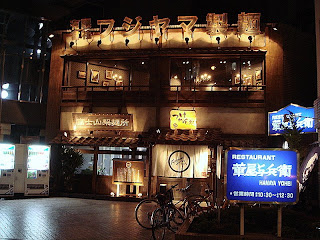 Rather than a standard ramen shop in style and format, Fujiyama is essentially a proper (small chain) restaurant. There is no counter whatsoever, but a large seating area of tables across two floors with a glassed off kitchen. The concept, as it were, is "noodle factory" - the word seimen in the restaurant's name indicates that the noodles are specially made on premises, and there is a large flour processing machine (or something) right near the door. In addition, the decorations around the restaurant are primarily black and white photographs of what appeared to be old pre-war noodle factories. The first page of the menu also had a description of their flour selection process in overly flowery calligraphy. 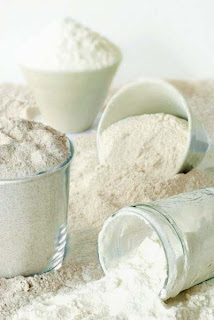 Fujiyama has a large full menu with multiple pages that offer a large variety of tsukemen and a slightly less large variety of ramen. Most of the menu items are just pre-fixed combinations of toppings, but this is one less barrier to entry to potential customers who feel like knowing how to order ramen properly (by shouting specialized words at the chef - think the "ninniku code" at Jirô) is scary or confusing. In addition to the sizable list of noodle dishes, there is a larger than average selection of otsumami (snacks) as well as a pretty tasty selection of mini-donburi (rice dishes).

The customizability continues on the size dimension as well. There is a mini-size "children's ramen" with no spice factor, a small size "ladies ramen," and a gradual progression in size from satisfying to downright ridiculous. For about 1,500 yen, you can order the "Mt. Fuji tsukemen," which is no less than 1.2 kg (2.65 pounds) of noodles. Presumably people split it in groups? I wonder if you get some kind of prize if you can eat it all. Put simply, that is a lot of fucking noodles. I think the basic was about 200 grams, which is still a generous helping - ômori (large size) was (I think) 300 grams, which took me a substantial amount of time to finish. Again, after Ore no Sora, it was nice to sit down in front of a bowl that seemed bottomless.

After substantial internal debate (I don't think it's ever taken anyone that long to decide on which ramen to order) I ordered the "orochon ramen" which is what they call their special spicy ramen. A quick google search reveals that "orochon" is the Japanization of Oroqen, which refers to a Tungusic ethnic group living in Northeastern China. Apparently the meaning of the word in the Oroqen languge is "people using reindeer," so I guess I had the "people who use reindeer ramen." It seems like "orochon" may have come to the ramen world via Korea, since it seems to be a not uncommon word for "extra spicy" ramen. If I had to guess, I would speculate that the name was chosen for having something to do with ramen that is so badass that it is the kind of thing that tough Siberian tribesemen would eat. My impression is that Koreans tend to associate anything vaguely Mongolian with a certain degree of badassness, which makes sense in this context. Either that or it's just a horrible mispronunciation of a Korean word that has nothing to do with the shamanistic cousins of the Evenki. Apparently the spiciest Korean-style noodle shop in LA is also called "Orochon" for what it's worth. 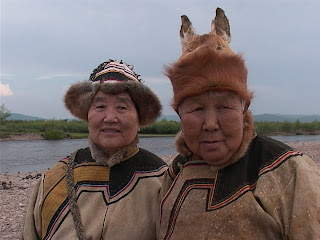 The orochon was by no means very spicy at all, but it was very tasty. Simple, straightforward, and in no way adventurous, but totally tasty. Again, going the middle road and aiming to please. The soup was a blend, but shôyû seemed to play a big role, with just the slightest hint of the fish broth. Toppings were standard with a big fat (and surprisingly tasty) shocking pink naruto and the standard onion and better than average chunky menma. The noodles were very fat and very straight, almost indistinguishable from spaghetti and, being fresh, definitely extra tasty. Thick, chewy, comfort food. One customization I regret not taking advantage of is the ability to get an egg topping cooked in different ways - raw, half cooked, barely cooked, boiled. For the tsukemen you can order the noodles served with four different degrees of warmth, which is a nice touch. 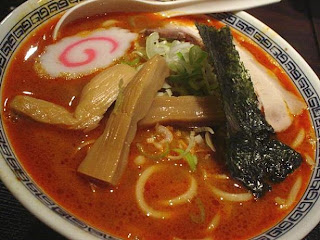 After the many minutes it took to polish off what seemed like more than enough ramen, I felt very full and very satisfied. Fujiyama is ramen for the whole family and makes no bones about it. There's nothing challenging about their soup or anything else, and it's clear that their mission is to offer a restaurant where anyone can come in and enjoy noodles their own way. It could be a recipe for mediocrity, but Fujiyama ends up succeeding admirably. This is not ramen for the ramen freak, but ramen for the anti-ramen freak. Nonetheless, I liked Fujiyama a lot. I can see coming back here sometime the same way I would stop into a curry rice shop - to get full on something warm and simple. Plus, they have a green light inside their toilet.
Posted by Nate at 6:45 AM