This past week my cousin was visiting from New York, so I didn't spend too much time running around to new shops. Instead, I revisited a couple favorites, like AFURI and Kitarô.

One of the stops high on my cousin's hit list for Tokyo was the parasite museum in Meguro - billing itself as "the world's only museum of parasitology", the Meguro museum is pretty stomach turning, with all kinds of displays of pickled parasites, photos of victims of obscure infections, and a surprisingly rockin' gift shop (!) 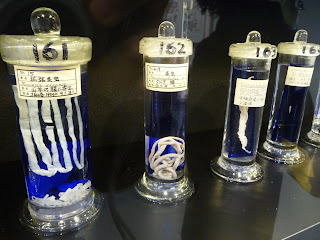 Naturally, the ideal food to eat prior to checking out 8 foot tapeworms in jars is long thin noodles, so we stopped by old favorite AFURI in Ebisu on our way down to Meguro. I figured AFURI was on the way and would be a nice refreshing bowl that wouldn't weigh us down on our long day of cruising around town and going to obscure museums. Plus, it's "popular with women." 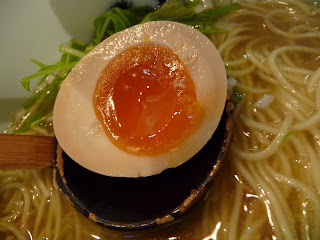 We got there a bit ahead of the lunch rush, so didn't have to wait. We each got a bowl of the Yuzu (citron) shio ramen. The half soft-boiled egg (which comes free with each bowl) was done perfectly as ever, and the yuzu hit the spot, but in the fashionable yuzu shio category I think I have to give the edge to Menya SOU - AFURI's thin noodles seemed a little off, and SOU's broth is just a tad more complex. Nonetheless, a high quality bowl of ramen, and the side dish of takegohan (bamboo rice) can't be beat: 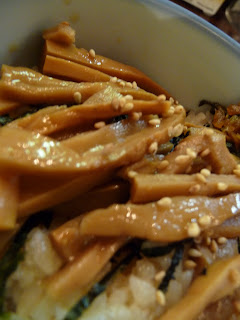 A couple of days later, for my cousin's last lunch in Tokyo we decided to grab another bowl close to home before she headed for the airport. Kitarô was just around the corner, and I had been impressed with their aemen last week, so we decided to head back there. This time, we both decided to go for straight-up ramen, rather than continue to explore the experimental soupless noodle options. I went with the "black" ramen, my cousin with the "white" - Kitarô does their menu in colors: yellow for curry aemen, red for chili aemen, white for basic tonkotsu, and black for shôyû. 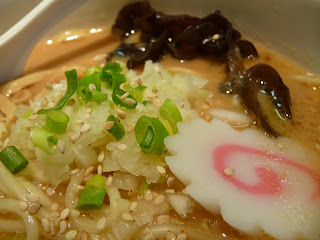 A far cry from the experimental and highly innovative curry aemen, the "black" shôyû tonkotsu was refreshingly straightforward, classic yet upscale. In addition to the naruto, bamboo shoots, and green onions, Kitarô's black also had a dash of chopped raw white onion, and, perhaps in a nod to the Kyûshû tonkotsu tradition, kikurage woodears, which were served in large chunks, rather than sliced. Though nothing especially new or mindblowing flavorwise, this was clearly ramen made with higher than average quality ingredients and greater than average care; it was also pleasingly ungreasy for a shôyû tonkotsu. The noodles were about medium in girth, neither thick nor thin, and the egg was awesomely gooey in the middle. 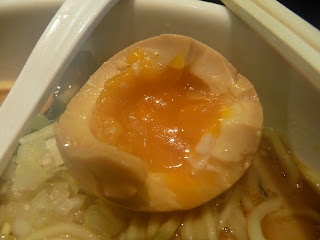 I think the "white" tonkotsu may not have been quite as successful. In comparison to the shôyû tonkotsu, the broth wasn't quite as rich or flavorful, and felt a little bit overwhelmed by the taste of the fresh white onions. 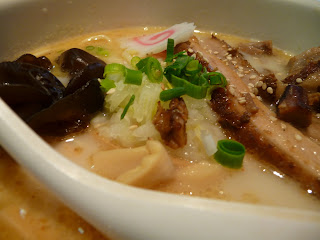 My cousin says the pork was also quite tasty. All in all, Kitarô's ramen is high quality, but it can't quite reach the mindblowing levels of their curry aemen; I think I'm gonna save the soup for other shops and come back here when I want the soupless stuff.
Posted by Nate at 12:09 AM