I had just finished watching TV Tokyo's two and a half hour long year-end ramen special (to be covered in the next post), and after being barraged with that much noodle porn, I ran out of the house to eat as fast as I could. All the shops covered on the show were new, hot, experimental-type places, so it put me in the mood for some outside the box ramen. Fortunately, I hadn't yet ticked Ebi Soba Keisuke II off the list, and it was just a stone's throw from my front door on the road to the station, so I decided to do my next bowl there. 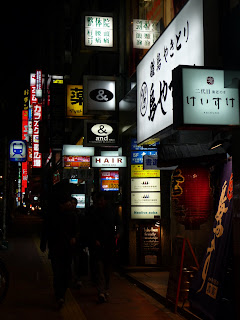 Keisuke II is located just east of Takadanobaba station on one of the busier blocks of Waseda-dôri; the Keisuke sign is the one on the far right of the sea of neon. Keisuke II is, as may be apparent from the name, the second ramen venture of up-and-coming young(ish) cook Takeda Keisuke（竹田敬介）: 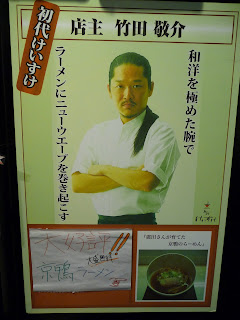 Besides being sufficiently bad-ass looking for a ramen cook, Keisuke has built a small empire since opening his first solo shop in Hongô in 2005. Having spent years training in Italian and French as well as Japanese restaurants, Keisuke decided to try his hand at the ramen game and opened a shop near the storied "Red Gate" (akamon) of Tokyo University specializing in a rich fish and miso blended dark black soup. Apparently it must have done pretty well, because only a year later he set up Keisuke II across town near Waseda. Each of Keisuke's shops specializes in a different concept, which is an innovative idea - the original shop does the black fish miso, II is a shrimp ramen specialty shop, III is in Tachikawa and takes pride in their Chinese-style red oil (hongxiangyou 紅香油), and allegedly shop IV in Komagome does a lobster (!) ramen. Apparently there is also a limited time duck ramen on offer. 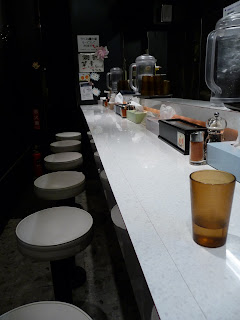 Inside, Keisuke II is a great blend of concept shop and old-school ramen joint. The black walls make it feel a bit gussied-up, but the white counter and the fact that it's narrow even as far as ramen shops keep it cozy. Interestingly, most of the clientele were in their 30s, which is a bit unusual - usually there are at least a few younger people or older people. In any case, maybe the age bracket has something to do with the soundtrack of 80s American pop and Hi-NRG dance music that made me feel like I was back uptown in New York. 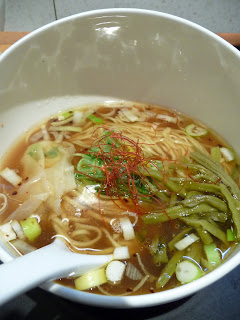 I got the basic bowl of "Ebi Soba" (shrimp noodles), which clocks in at 780 yen. Keisuke II is the kind of shop that goes out of their way to take care of their customers - the same 780 yen gets you ramen of any size at any time of day, from the standard 200 gram portion to the extra-large 400 gram, which is really quite a deal; rice is also free. In addition, they provide other kinds of services, like hair ties for women (and presumably long-haired dudes as well), paper aprons, and they'll even wash your personal chopsticks that you brought from home - I guess my offhanded comment about no one bringing their own sticks to ramen shops was off the mark. Keisuke is definitely going for a bit more mature crowd than your stereotypical ramen fan who is satisfied to splatter broth all over his duds. They even were selling takeout soup and noodles to get you through the 4 day New Years holiday ramen jones! 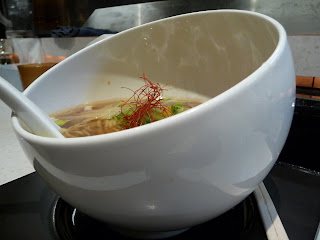 They also take great care in their choice of tableware - instead of standard bowls, Keisuke II's ramen comes in giant severed tilted spheres on square black plates. To be honest, even though it's visually impressive, I found this to be a bit of a hassle, and ended up spilling more than a few drops out of the tilted rim of the bowl. The tsukemen dipping broth also comes in fancy ceramic coffee cups. Anyways, let's get down to what was in this bowl! 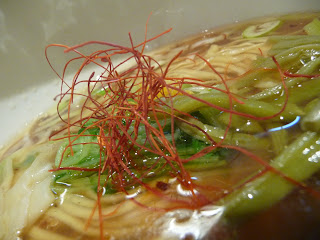 Keisuke II definitely goes for a similar layout of toppings to other assari-kei (thin soup) fancy shops like Sou and AFURI, with mizuna greens and those mysterious red slivery things that look really pretty on top. One unusual topping was the generous heaping of yamakurage (literally "mountain jellyfish") vegetables instead of bamboo shoots, which I found to be extremely tasty. The noodles are medium thin and medium wavy, nice and light, with plenty of them. But the real thing that makes Keisuke II unique is this: 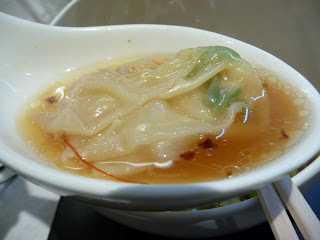 A big fat fuckin' shrimp wonton. Sitting in a cujungulously large spoon. The basic ramen comes with one shrimp wonton, but for a couple bucks extra you can get them loaded up (which I may do next time). As a non-châshû type guy, it was great to have such a tasty substitute, which was soft and well done. Keisuke II's titular shrimpness goes beyond the wonton into the soup itself, which is the other star. Made (I think) of largely shrimp and chicken broth, Keisuke II's soup is souper tasty, and I realized that I had drank almost all of it by the end. For a lighter soup it was very complex and maintained a nice bit of oil without being overpowering or cloying, not unlike Ogikubo-style soup; it also was served extra hot like Ogikubo-style soup. 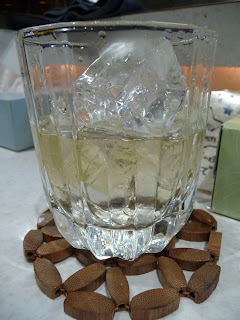 The thin but strong soup matched well with the 500 yen glass of mugi shôchû (Japanese barley vodka) on the rocks that I ordered. Not a fantastic shôchû, but again, another example of thinking outside the box, and a good way to get your liver juices going before a night of heavy drinking in Shinjuku. 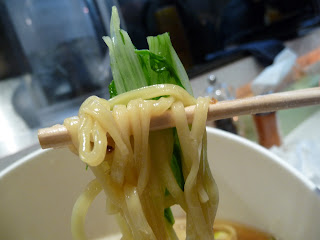 All in all, Keisuke II serves up a high quality slurp. Totally tasty and totally unique, with all the touches of a fancy ramen shop, without trying *too* hard to seem classy, though I could do without the weird bowls. Being so unique, I don't know if I want shrimp noodles every day, but I'd recommend Keisuke II to anyone, and I'm curious to try some of Mr. Takeda's other concept shops around town.
Posted by Nate at 10:17 PM

stumbled across your blog via google, and love it! I myself am studying at Waseda for the year.

Glad you like it! I took advantage of everything being closed for New Years and put up a couple more posts, so keep checking back. I tried to leave a comment on your blog, but it was having trouble so I shot you an email instead. Let me know if you figure out what the hell those red things are. Got any favorite shops in the area?