"Japan has amazing junk food doesn't it?" That was my professor's comment upon watching me unwrap the offense-against-all-that-is-holy of a "sandwich" containing yakisoba and a fried potato croquette. When I was eating at Bubka tonight I couldn't stop thinking that the abura soba (oily noodles) I was chowing down on were truly ramen as junk food par excellence. But let me back up a bit. 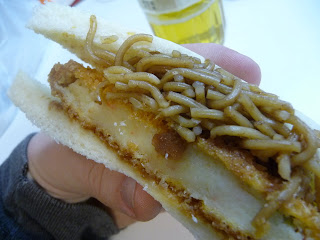 Tonight was unseasonably warm for late December, so I decided to eschew the two-wheeler and hoof it to the west side of 'Baba station to hit up Bubka. The fact that I had forgotten my bike key upstairs also probably had something to do with the bipedular decision. It's bônenkai (year-forgetting party) season right now, so the streets were unusually packed for a Sunday night, and group drunkenness and indiscriminate yelling abounded all the way to the station. 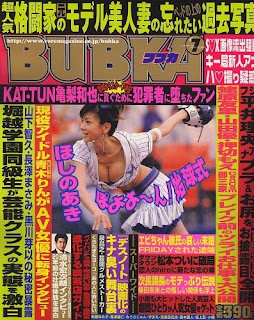 Bubka first caught my eye due to the fact that it shares a name with one of the trashier gossip rags / porn-peddling mags around. For what it's worth, apparently it's also the name of a world-famous Ukrainian pole vault champion. Bubka serves up a bowl of noodles that would probably be right up the alley of either the readership of the eponymous magazine or the Voroshilovgradian vaulter. 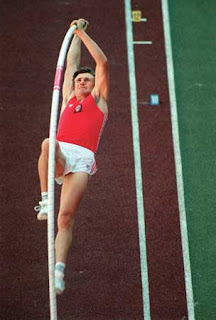 Bubka is a straightforward no-nonsense ramen shop all the way. After a quick glance around, I was about to make a mental note that everyone else in the store looked every bit the ramen fan (that is to say, chubby dudes), but no sooner did the thought pop into my brain than two young couples walked in. 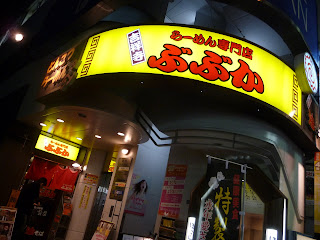 The menu is clearly tailored towards those who take their ramen seriously, with only two basic choices on offer - tonkotsu ramen and abura soba (soupless noodles). I had been wanting to get down with a proper bowl of abura soba, and I knew that's what I wanted before I walked in. 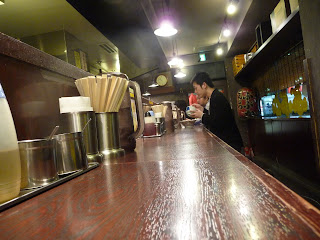 After a longer than average wait for the bowl of noodles to come up, I got hit with a savory and delicious carbohydrate bomb laid down on the counter in front of me. One look at Bubka's abura soba and I knew that this would be a satisfying bowl of noodles. 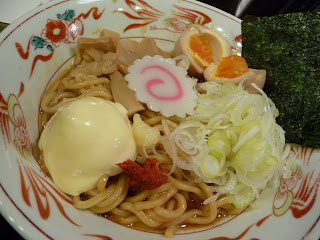 In case you're wondering, fuck yeah that's a big glob of mayonnaise! After I put in my order, I took a glance at the longer than average list of available toppings, and decided to do this bowl of noodles full up with a soft-boiled ajitama egg and some mayo. I hadn't had mayo ramen in six years, not since my last visit to the tiny reggae ramen shack in Shibuya's backstreets, but this was a day to go for the gusto. Another unusual topping on offer was spinach - as luck would have it, "Popeye" is the name of another (albeit slightly less trashy) men's mag in Japan.

Before chowing down I dabbed on a bit of garlic, a bit of thick chili sauce, and a splash of vinegar before getting down to mixing it all together: 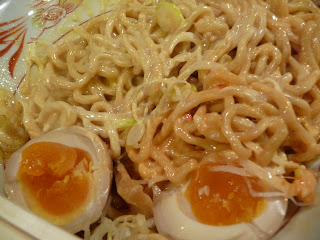 As I said before, this was definitely ramen as junk food. Just a whole bunch of savory things mixed all up ins, held together by thicker and chewier than average noodles. When you're doing ramen without the soup, you've got to make sure the noodles can deliver, and Bubka's do. To be honest, I'm not sure I needed the mayonaisse in addition to the oil the noodles were already floating in, but like I said, it was a gusto-going for kind of evening. The only negative was the fact that without any soup, the noodles didn't seem to go as far - maybe it's because you don't get full off the liquid, or maybe it's an optical illusion due to the fact that you can see the noodles decrease with each bite, rather than be left in the dark as to how many strands are left in a cloudy soup. Nonetheless, Bubka only charges 580 for a standard bowl, one of the cheaper prices I've seen outside of Jirô these days, so paying an extra hundred for the ômori extra noodles is no biggie. 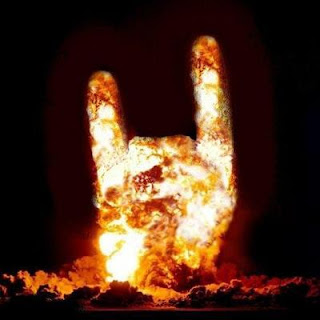 I really enjoyed Bubka's abura soba, and I ate up every last sliver of onion coated in the thick oily, spicy, garlicky, mayonnaisey goo. Honestly, I wished I had some chips, because when I finished the last of the noodles I wanted to use that remainder as a dip. Abura soba like Bubka's is almost like Japanese nachos, if that makes any sense. These noodles are the food equivalent of the act of grimacing, furrowing your brow, and clenching your hands when a good metal song comes on the stereo. Fittingly and thankfully, Bubka also serves draft beer. As I was polishing off my bowl, X Japan's "Forever Love" started playing over the PA. Definitely a ballad, but a welcome change from the recent Christmas jingle remix overload, and definitely worthy of a lighter raised in the air. I'm going back to Bubka - next time I'm going to do the abura soba with a raw egg and extra bamboo shoots. And I'd lay a fair wager that their straight up tonkotsu ramen rocks too.

FOREVER DREEEEEAM!
if you had to pick a ballad, that's a pretty tight one (thought it always reminds me of Hide's funeral, when Toshi sang it along with Yoshiki on piano)...

That mayo grosses me the hell out, btw. I am glad you did not have a Bubka shinzou exprosion.

bubuka by kichijoji station yeah? great stuff! also try out harukiya on the other side of parco

@anonymous - this is actually the bubka location by takadanobaba, but the kichijoji one is the original shop. i havent been to the harukiya there, but ive been to the first harukiya which is in ogikubo. check out my old post about it.

Our Bangalore Escort is giving immigrants companions solution in Bangalore if you want timeless designs Call Girls In Bangalore offered for the always so luxury companions if you desire for enjoyment so you can concern Bangalore for VIP Bangalore Escorts, Air-hostess Escorts Bangalore and also TV Actress companions you can book online for our Escort In Bangalore as well as on the need you can tack companions profile Photos on your WhatsApp mobile number so our companions firm prepares to grow to be Bangalore top company and primary companion firm to offer the outstanding Escorts Services In Bangalore provider inside the Bangalore. you might experience the affection as you utilized to us. Obtain us in touch through calling us proper away as well as get remarkable deals and offers now for your enjoyable times.

By no means make it possible for yourself receive overloaded with data, but merely allow complete awareness of one particular concern on any end time. sniper fury game download will end up a lot more valuable every time you appear to be you will end up progressing on the number reverencing basically needing to have more aid.

The days of visiting a brothel to find the right girl are behind us. Thanks to the amazing advancements of technology and the internet that connects us to everyone and everything we need, it is as easy as the push of a button to find the right companion to tend to your every desire. Our website offers you the easiest ways to find Kolkata Escorts
bankura escorts
birbhum escorts
cooch-behar escorts
darjeeling escorts
mountabu escorts

Our girls are excellent at making connections and gel up with people with ease. Thus, customers don’t have trouble appointing them for social gatherings.